Several roads in Bukit Mertajam are now aglow with red lanterns and decorations to mark CNY.

The 5,000 lanterns, installed for the fourth year, will be lit every night until mid February.

The lighting up ceremony saw a slew of activities including an array of traditional delicacies prepared by the Hokkien, Kwong Waai Siew, Hainan Hakka and Teochew communities.

There were also lion, dragon and cultural dance performances as well as dough figurine-making, highlighting the Year of the Rat.

Apart from Jalan Pasar where the lighting ceremony was held, Jalan Tokong, Jalan Danby, Jalan Bunga Raya, Jalan Station, Jalan Datuk Ooh Chooi Cheng, Jalan Arumugam Pillai and Jalan Aston will be lit from 7pm till 1am until the 15th day of the lunar new year.

Ong, who is also chairman of the Seberang Prai Hokkien Association, said they hoped to bring back the vibrancy of Bukit Mertajam like it was in the ‘old days’.

Chief Minister Chow Kon Yeow, who was guest of honour, commended the organising committee for the good job, while taking note of the new additions such as a grand stage, a 5.5m-tall arch and other exciting programmes that were added this year.

“They have added figurine-making, handmade wax flowers, more handicraft items and a board games booth, among others.

“The committee members are dedicated to presenting traditional folk culture and the uniqueness of those traditions so that the younger generation can be in touch with the traditions from a young age and learn to love and care for the culture, which is valuable.

“It shows the Chinese community’s persistence in inheriting Chinese traditional culture, ” he said.

Chow said it was understood that many old shops in Bukit Mertajam town centre had closed for many years now.

“However, since the committee members have actively promoted the festival, the old shops have gradually regained the favour of investors and tenants.

“Therefore, I believe that Bukit Mertajam will regain the glory of its past, ” he said. 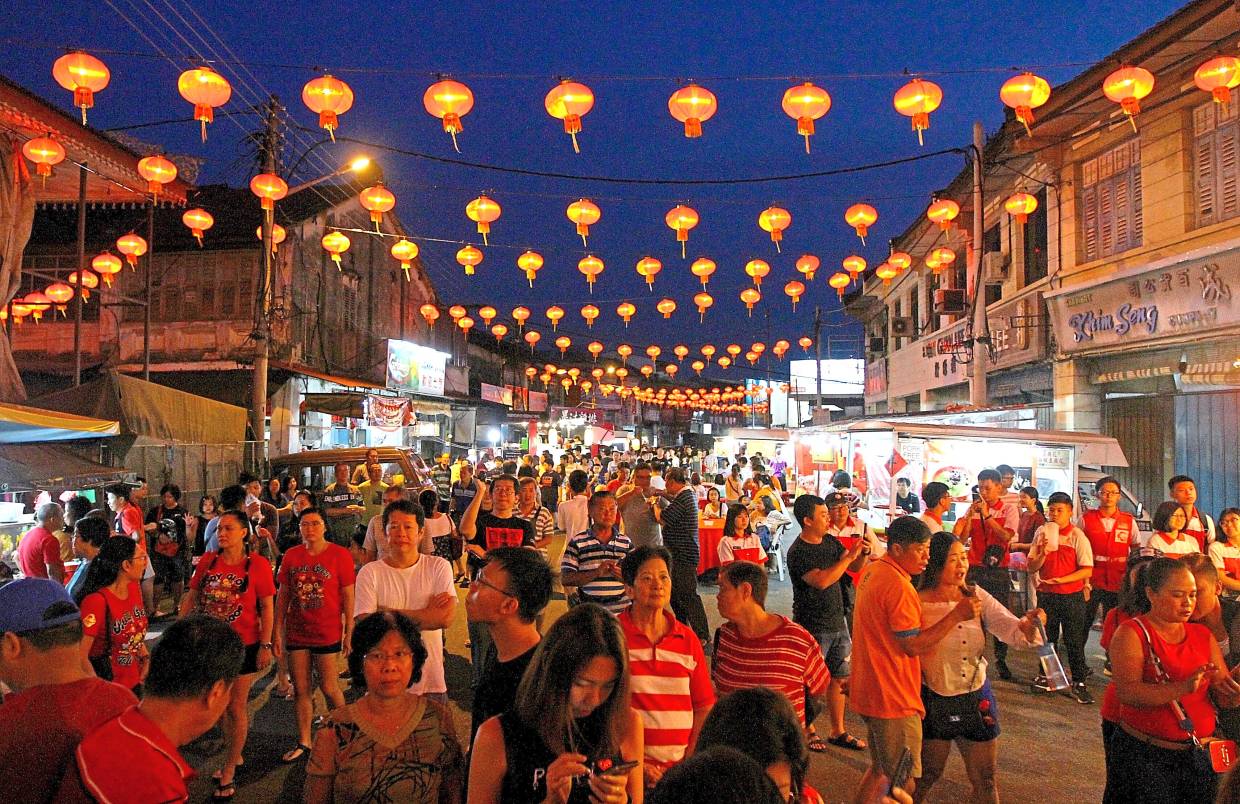 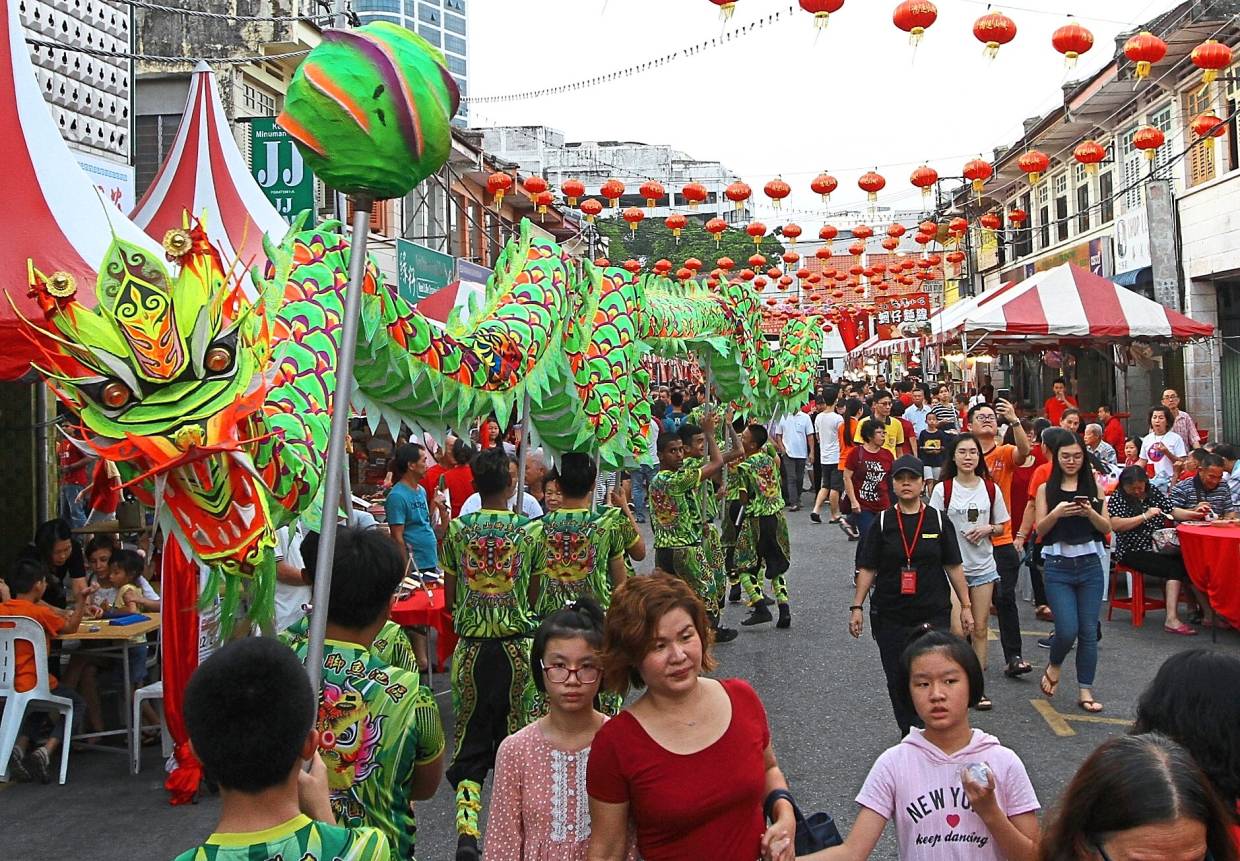 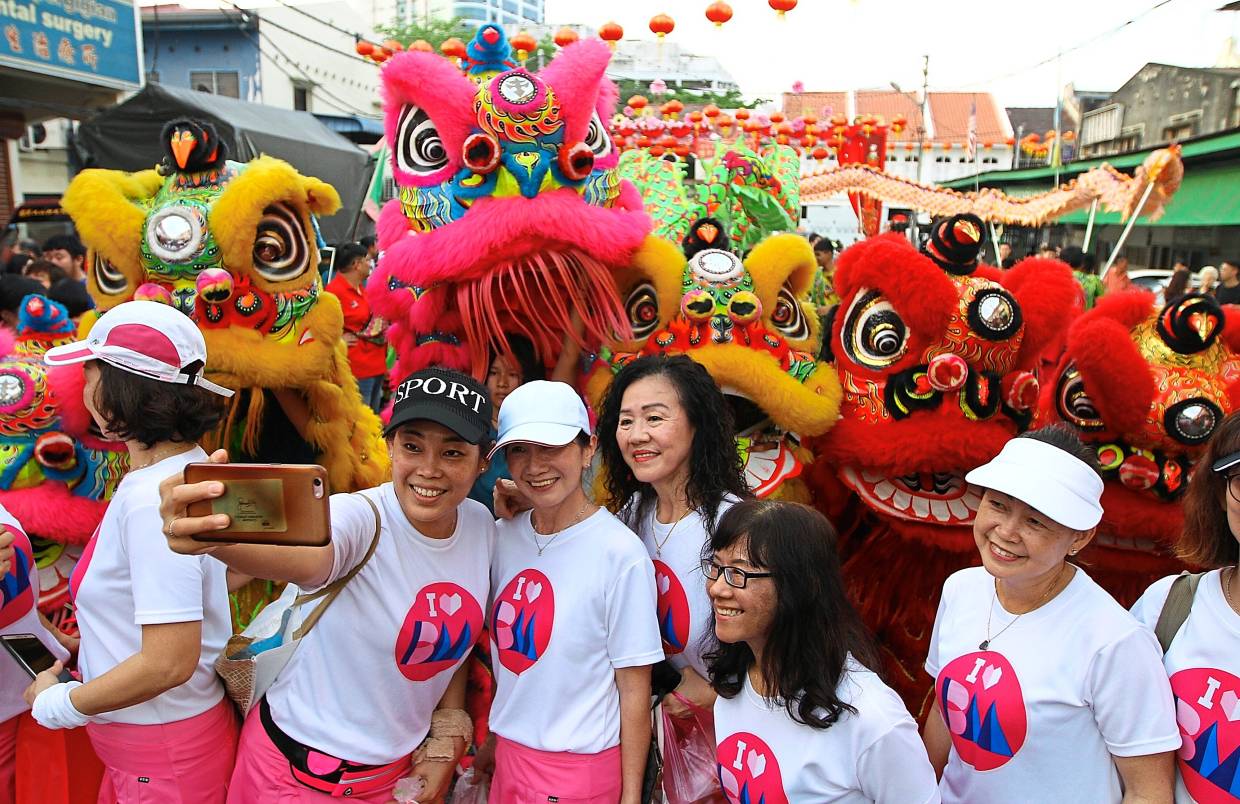 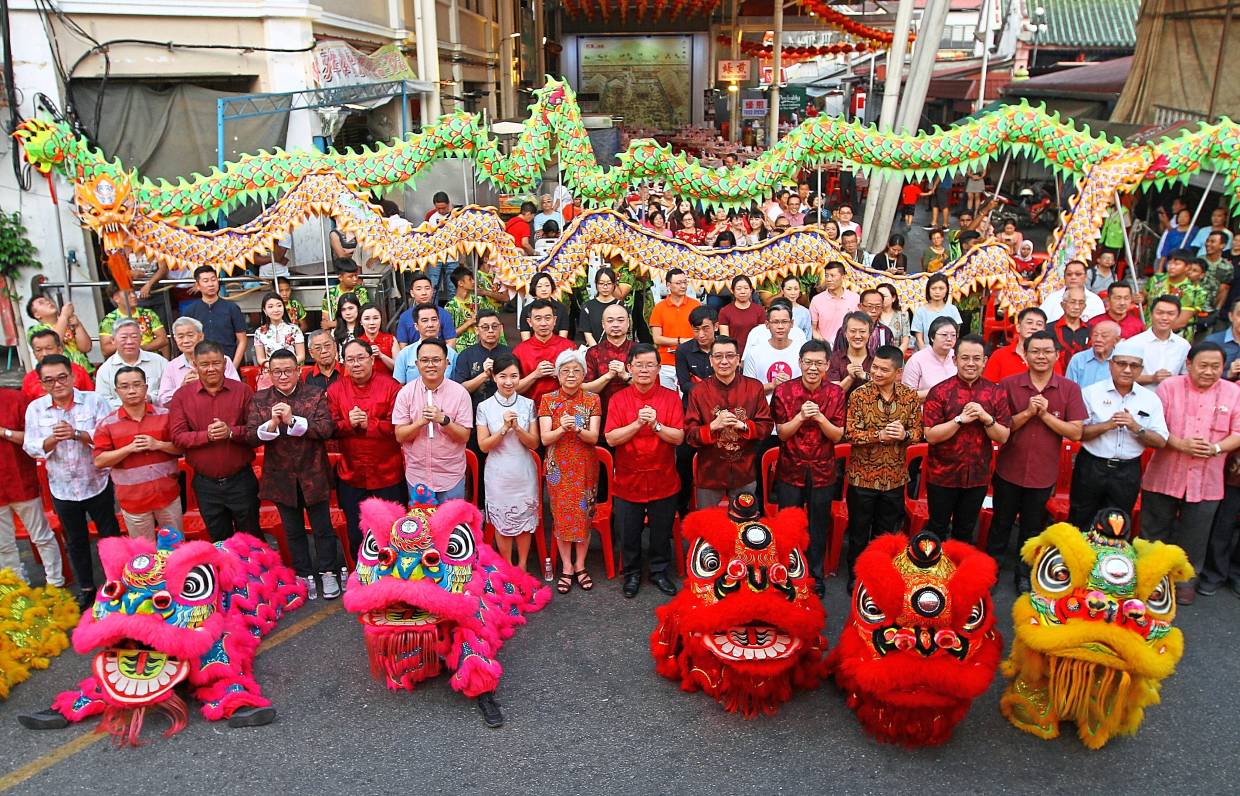 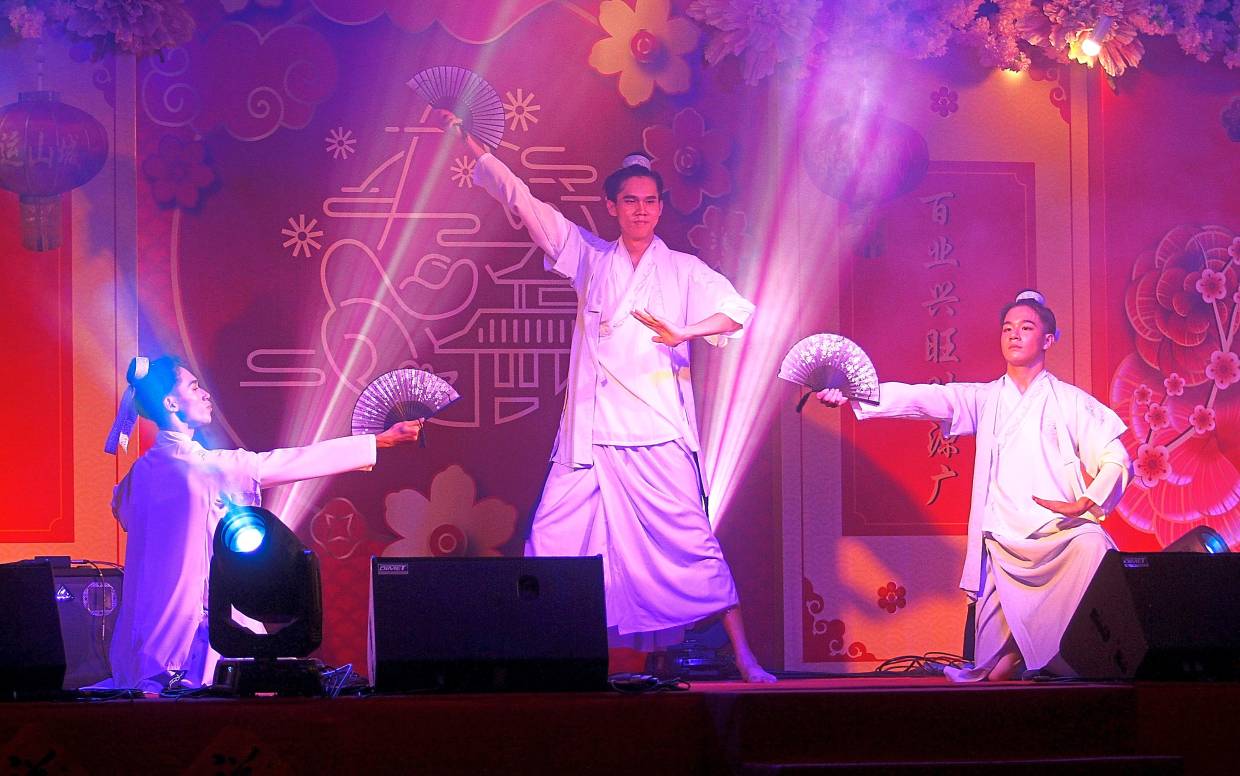 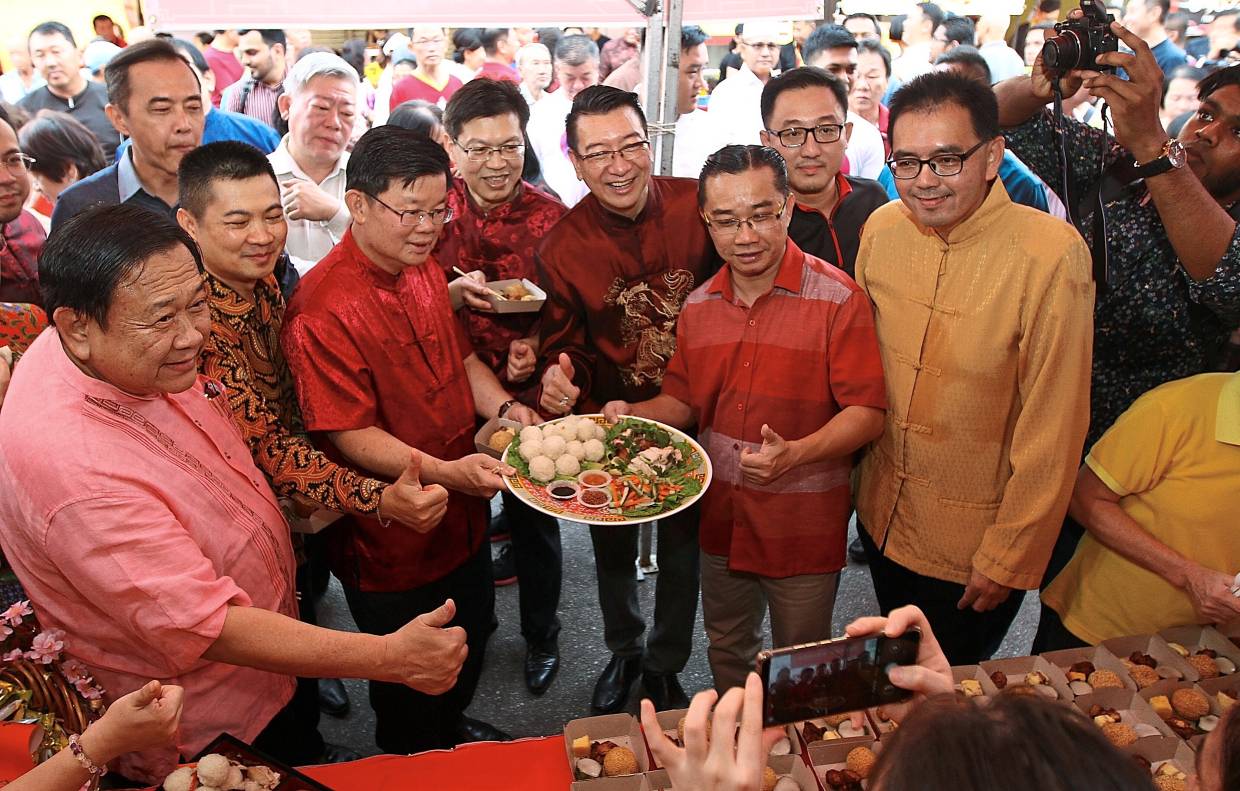 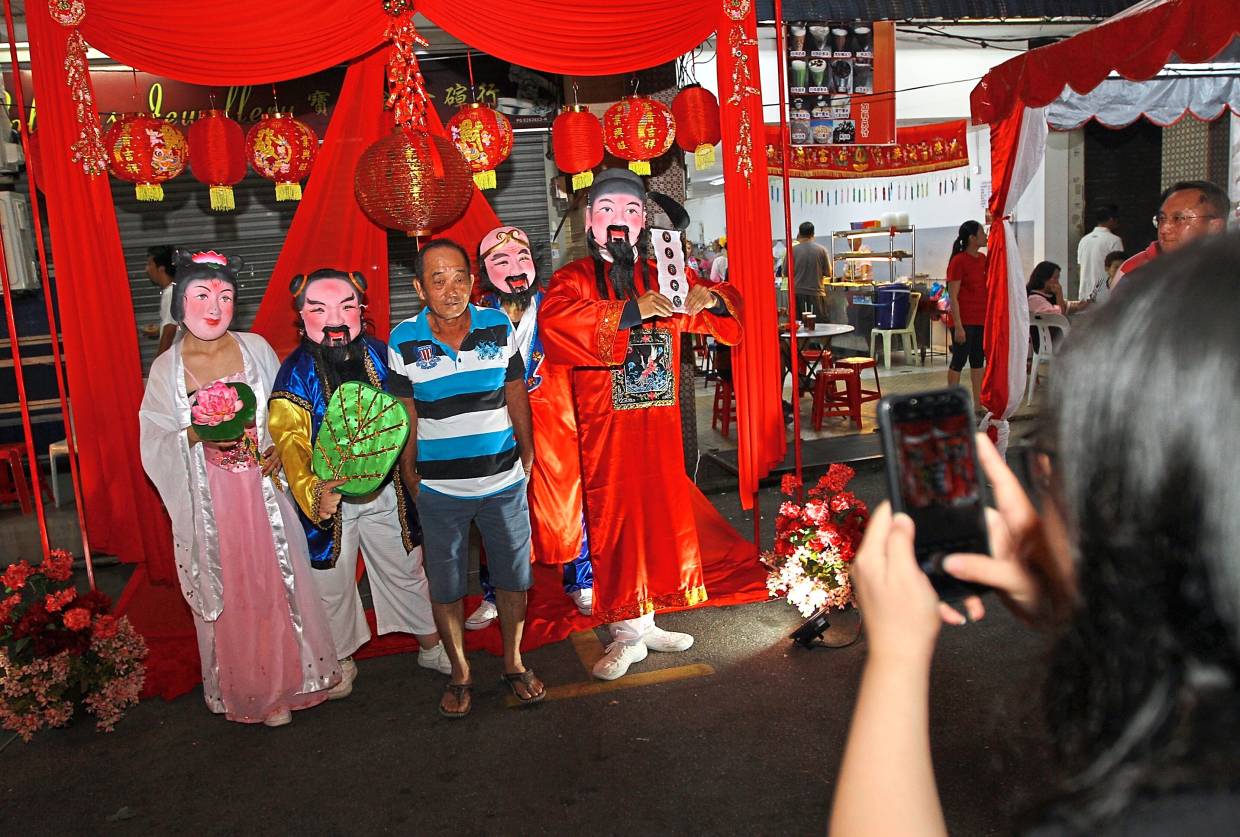 ^ Dragon dance troupe members warming up before their performance at the ceremony to light up Chinese New Year lanterns at Jalan Pasar.

^ Visitors posing for a wefie with some of the lions at the event.

Chow (front row, middle, in bright red shirt) with other local leaders and VIPs posing for the camera before the lighting up ceremony in Bukit Mertajam.

Chow (third left) accompanied by local leaders as he samples some Chinese delicacies at one of the food stalls.

A visitor posing for a photo with several Chinese ‘deities’ at the event.