Tourism Ministry gave RM1.8mil to build the pavilion in Tasik Biru in 2012. The space, which has an air-conditioned hall for 500 people, is now rented by a restaurant.

ONCE a jewel of attraction for anglers and jet skiers, Taman Tasik Biru Seri Kundang in Rawang held much promise as a tourist draw.

There were plans for a helipad on an island at the lake for emergency and in case of mishaps. Promises of further upgrades were also made.

However, during a recent visit one Saturday afternoon, StarMetro saw that not only was there no sign of a helipad, instead we noticed dustbins overflowing with rubbish, drawing flies and vermin. Three letters were also missing from the Tasik Biru sign on the island.

Visitors complained about the lack of safety barriers between the children’s play area and the main road.

They said these areas were badly lit and many of the adult exercise equipment were either broken or had parts missing.

Although visitors can still rent jet skis from private operators at RM95 per day (with petrol included), international water sport events have come to a halt.

The last event, the 8th Kundang International Jetsports Challenge, was in 2016.

Some have also remarked that the lake’s water quality has become unsuitable for water sports, judging from the signs of green algae, which MPS confirmed was a sign of contamination. 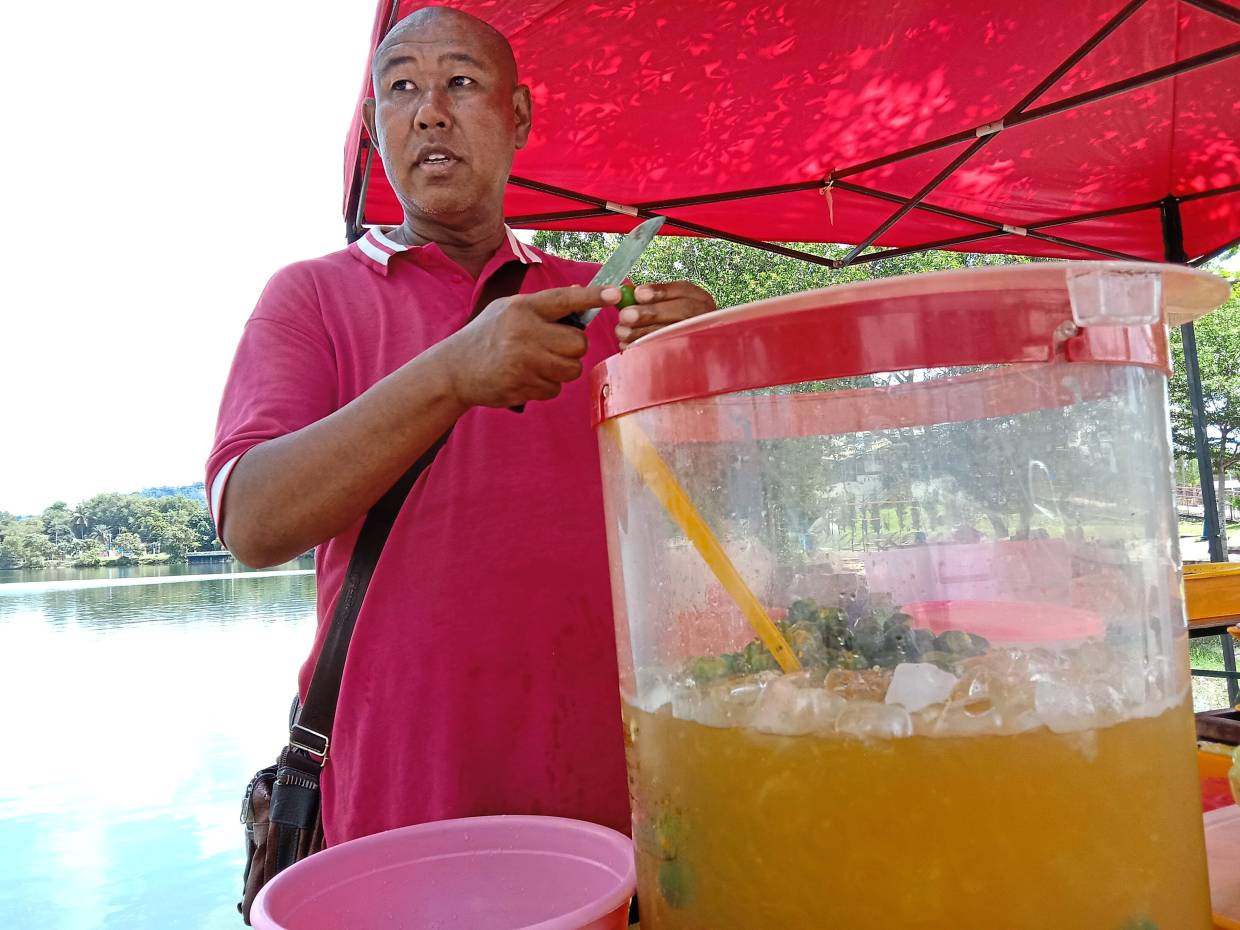 Drink seller Sahudi Awang is willing to pay rental for a hawker stall at Tasik Biru if MPS decides to allocate a site for traders.

Another visitor Mustafa Shahbudin, said he had heard stories of the lake being haunted and advised visitors, especially children, against visiting the lake after dusk.

“There have been drowning cases at the lake. Last year, a 10-year-old boy drowned after getting into difficulties while swimming with friends. I hear of such incidents every year, ” said Mustafa.

Thirty-two-year-old Firdaus Hamid said the lake was still a draw for avid anglers like himself and teenagers like Shahrul Ikhwan Farihin, 13.

“Better attention from authorities can go a long way towards improving the park’s visitor count. They should allocate proper parking. Now visitors are parking their vehicles haphazardly by the roadside and causing traffic congestion, ” said Firdaus.

Shahrul and his friends hope the council would consider including a wading pool and a connection bridge to the island.

They also want the short enclosed tube slides to be made longer with double curves as such measures will give users a more thrilling experience. The council’s Landscape Department deputy director Syamsul Arif Mahmud said MPS spared no effort in securing funds for maintenance and upgrade of the lake’s recreational areas in the past eight years.

But vandalism and the community’s careless attitude towards park facilities were straining MPS’ coffers.

For example, this is the second time MPS has carried out replacement of broken exercise equipment. Both replacement exercise cost MPS RM18,000 each time.

Safety barriers in the form of non-climbable metal fences were also installed near playgrounds in the past but these were stolen. As other repairs have higher priority, the replacement of the fence would have to wait, he said.

The department will continue with its water quality pollution prevention programme to address the onslaught of green algae in Tasik Biru.

MPS will also have wetland plants to provide better efficiency to the proposed water filtration systems located at the end of the newly built drains.

The project will cost MPS RM220,000 and is expected to be completed by the end of February after delays caused by heavy rain.

Rubbish trap features will also be incorporated into the new U-drains and will be cleared daily by KDEB Waste Management.

In addition, the council has allocated RM8,800 a month for maintenance of the lake’s recreational facilities. A contractor appointed by the department is responsible for collecting the waste generated by park goers daily.

At the consideration stage is a proposal to have an empty plot of land beside a futsal court located off Jalan Tasik Biru 1, to be gazetted into a public park.

The council has also installed flood lights to illuminate the recreation areas but some of them have short-circuited. These will be replaced by the end of February.

On jet ski events in the future, Syamsul said participants seemed to have lost their gusto for the sport after the last international competition in 2016.

From feedback, MPS learned that participants found the take-off area located beside the pavilion too narrow and congested. Currently, the council has given permission for water sports at the lake, provided safety precautions were adhered to.

A pontoon near the pavilion is readily available for those wanting to moor their vessels. Swimming is forbidden as Tasik Biru is a former mining lake where undercurrents are a prevalent danger. Signboards warn the public on the potential danger.

On the parking issue, Syamsul said once the land beside the futsal court was gazetted, the department would look into building a parking area for visitors. At present, there is a 500sq m parking area nearby the entrance to the park on Jalan Tasik Biru 1.