RESIDENTS in Jalan Jambu Golok, Kuala Lumpur are fed up with the daily traffic congestion in their neighbourhood during peak hours and want the local authority to solve the problem.

Goh Toh Hoo, 75, said the traffic congestion leading towards Jalan Kuching was extremely bad, especially in the morning when people were rushing to work.

He said the heavy traffic was also a source of noise pollution.

Hanif Ali Akbar, 57, a Segambut resident, also complained about the heavy congestion that was affecting him too.

“Every morning, I have to leave home very early to ensure my child gets to school on time.

“The traffic is so terrible that a mere 5km distance will be at least a 30-minute drive.

“Making it worse are motorists who often make an illegal right turn at the junction. As such, I suggest the traffic police come here to see the situation.

“They can station one or two officers here to control the traffic flow, ” said Hanif. 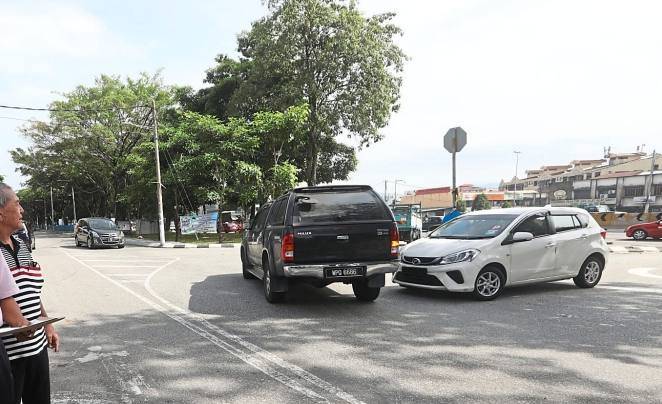 Motorists commonly make an illegal right turn here like the driver of this white car.

“I have already informed Kuala Lumpur City Hall (DBKL) of my proposals to ease traffic congestion around this area.

“The first proposal is to create a new junction on Jalan 1/42 that will provide access for motorists from Jalan Jambu Golok to go straight to Jalan Kuching.

“This will make it easier for them to head to Selayang, Kepong or Kuala Lumpur.

“Currently, all vehicles have to use the one existing junction and it has resulted in a bottleneck.

“I hope DBKL will study this proposal as I believe it can ease the traffic jam during peak hours, ” he said.

The second proposal, said Yee, was to open a new junction for traffic from Jalan Kuching to turn in to Jalan Selingsing 5.

“Right now, vehicles coming from Selayang heading to Taman City are using the same junction as vehicles from Jalan Kepayang that are trying to get to Jalan Kuching.

“The idea is to make it easier for cars coming from Selayang to turn left, straight to Jalan Selingsing 5. It will ease the congestion.

“The same concept is adopted in the third proposal which is to open up a new junction from Jalan Kuching to Persiaran Arfah, ” he said.

Yee said the problem at the current junction would get worse whenever there were buses in the mix.

He added that he would follow up with DBKL on the matter and get the local authority to conduct a site visit as well as study the feasibility of his proposals.