A TRADITIONAL Malay house (Rumah Melayu) that is dazzlingly lit up is one of the many highlights at the 7th Light and Motion Putrajaya (Lampu) 2019.

The event, from today until Dec 31 at Dataran Putrajaya, will feature the life-size house complete with a chicken coop, fish pond and padi field.

Putrajaya Holdings Sdn Bhd (PjH), the master developer and driving force behind the administrative capital, has been supporting Lampu throughout the years by sponsoring fireworks and lighted sculptures.

This year, it was given the honour to express the company’s creativity in designing the house.

PjH legal and corporate services division general manager Aminah Baba said they decided to be more involved in the festival, which culminates with the countdown to the new year as it enters a new decade.

“2020 is significant for Putrajaya and PjH too. Both will be celebrating their silver jubilee, so we were looking at doing something big and grand. Visitors to Lampu 2019 will get to see plants and trees lit up with colourful lights.

“Rumah Melayu is just a kickstart to the line up of programmes and projects that we have planned for next year, which are all designed to bring the people – both locals and tourists – together, to reflect on the past, present and future of our city, ” she said.

In line with PjH’s Oxygenation corporate tagline “Breathing Life into Vibrancy”, its corporate communications head Sabariah Mahmood said the company always believed in supporting festivals that promoted tourism for the good of the economy.

“As we aim to create a vibrant environment, festivals help to attract people to the venue and bring life to the surroundings, which is good for marketing the city too.

“Lampu 2019 is one of the big annual festivals in Putrajaya and this year’s celebration is tipped to be the best.

“We want everyone to make it here and witness the light show. I encourage visitors to take photos of PjH Rumah Melayu and post on their Instagram with the hashtag #RumahMelayuPJH #PJHLAMPU2019 #PJHOxygenation, ” said Sabariah. Aminuddin says people will be reminded of the country’s achievements at the four-day festival.

She added that the public can visit PjH’s official Instagram account @pjhomes_pjh for updates on events and promotions.

The event’s theme this year is “Beautiful Malaysia”.

Besides the Malay house, there will also be a Chinese Street with a lot of lanterns and an Indian Street with sculptures of peacocks and Indian lamps.

“The light show is very different from past years, whereby the shows were more focused on geometric shapes and images. This year, there is more meaning to the images that we will be projecting.

“The light show or grand projection mapping against the Palace of Justice facade, will tell the stories of the growth of the country from pre-Merdeka until today. Aminah says they decided to be more involved in the festival as 2020 is the silver jubilee of PjH and Putrajaya.

“Like a blast from the past, people will be reminded of the country’s achievements, such as the birth of our first national car Proton Saga and winning the Thomas Cup in 1992, ” said Aminuddin.

He explained that there are eight segments or stories, running between five to seven minutes each that will be played periodically, complemented by a surround sound audio system.

The quality of the show had also improved compared to past years, he added.

“The best time to come is 8.30pm onwards. There will be continuous shows and activities until 12.30am.

“There is also a planetarium and for a small fee, visitors can get a 360° view of the projection mapping and sound of three sets of video that will be played on loop. There will also be 10 lighted standalone structures to feast your eyes on.

“The side events include performances by street artists and buskers, silent marching, cultural performances like wayang kulit and bhangra, outdoor theatre and toy arcade, ” Aminuddin said.

Visitors can also look forward to a pyrotechnic display at the launch, fireworks as well as digital fireworks at the stroke of midnight on Dec 31 to usher in the new year. 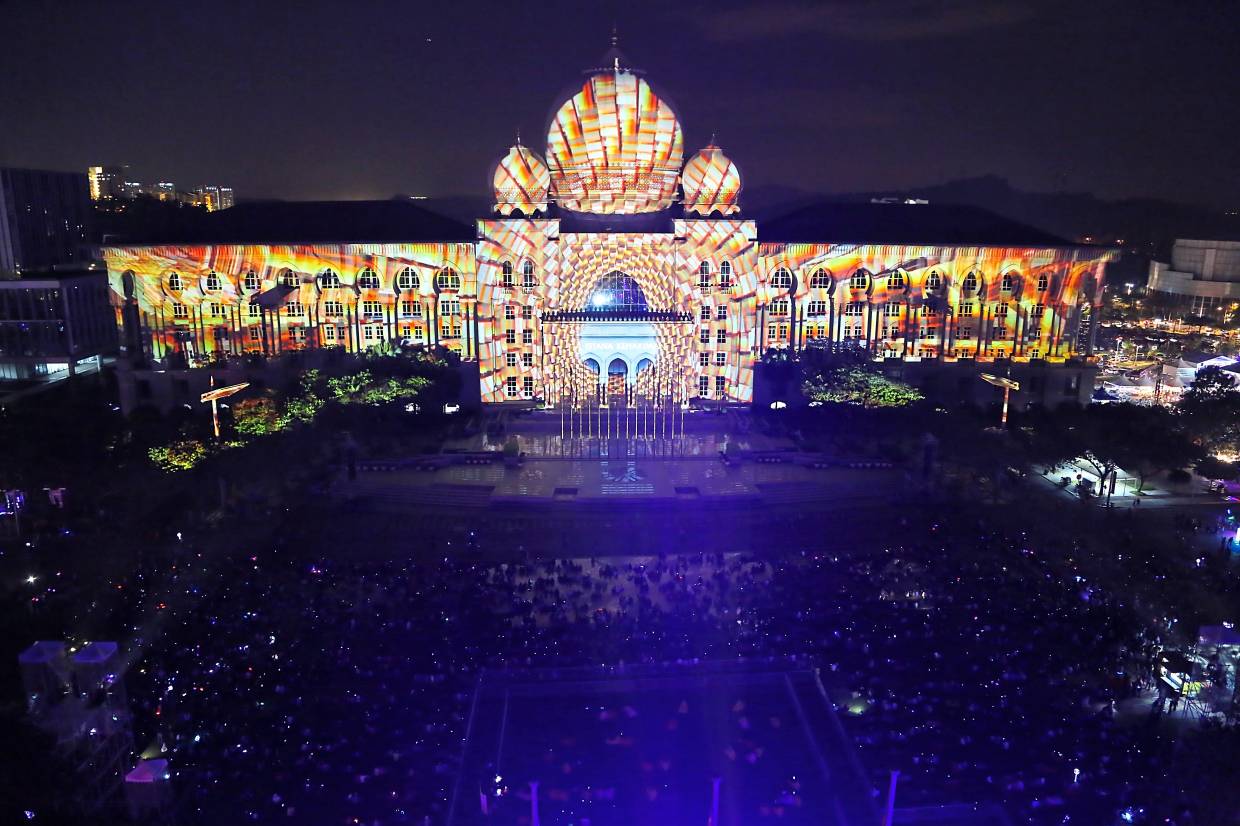 The Palace of Justice is being turned into a giant screen for the grand projection mapping.

“There will be lots of food trucks and food stalls. It will be a great day out for families and admission is free. This will be one of the best, if not the best, light shows in the country, ” he added.

“I will not divulge too much but there are opportunities for the visitors’ selfies to be projected on a big screen.

“Not all eight grand projection mapping segments will be displayed on the first day. We

will release it in stages throughout the four days so visitors can look forward to something new everyday.

“There are 24 parking lots that can accommodate up to 10,000 vehicles within walking distance from the venue and free shuttle service from Putrajaya Sentral, ” he said.