Christmas gift to the people

Moses (middle) holding his staff as the Red Sea is about to be parted by God, allowing him and the Israelites to escape the pursuing Egyptian army.

PENANG First Assembly of God’s drama ‘Let My People Go’ warmed the hearts of thousands in time for Christmas.

Held at the Multi-purpose Ministry Complex (MMC) in Karpal Singh Drive in George Town over three nights, it revolved around the Exodus of Moses. Young performers prancing about in a joyful Christmas number.

Featuring a cast and crew of over 200, it brought the Biblical story to life with spectacular multimedia effects and some local flavour.

Church administrator Molly Yeap said the presentation was their Christmas gift to Penangites.

“It has been an annual tradition since our first show in in 1990.” The numbers were taken from his self-titled Christmas album, a collaboration with local musicians Moses Chuah and sons, that was on sale at RM30 per copy to raise funds for mission work.

As the play started, the crowd got to know Seng Huat, a market vendor who had lost faith in God after losing his wife and daughter to a drunk driver.

After getting assaulted by bullies and experiencing financial hardship, he descended deeper into turmoil. Rev White performing a song from his Christmas album.

But God showed Seng Huat he had not been forsaken, first letting him see paradise, and then teleporting him back to ancient Egypt in the time of Moses.

There, he saw how the Israelites had been enslaved by the Pharaoh. Moses then heard the voice of God in the form of a ‘burning bush’.

The humble shepherd was charged to lead the Israelites out of bondage into the promised land. Moses and his brother Aaron set out to plead their case with the Pharaoh.

After their plea fell on deaf ears, God sent a series of plagues to bend the ruler’s will. Seng Huat being roughed up by bullies at the market.

The Pharaoh relented and told Moses to take his flock and be gone. But the Egyptian army pursued them to the banks of the Red Sea and they cried out for help.

God heard them and parted the sea, allowing them to cross. The waters then closed, drowning the Egyptians who followed.

Seng Huat, having seen the miracles of God, has his faith renewed. He returns to the market with a new outlook on life. 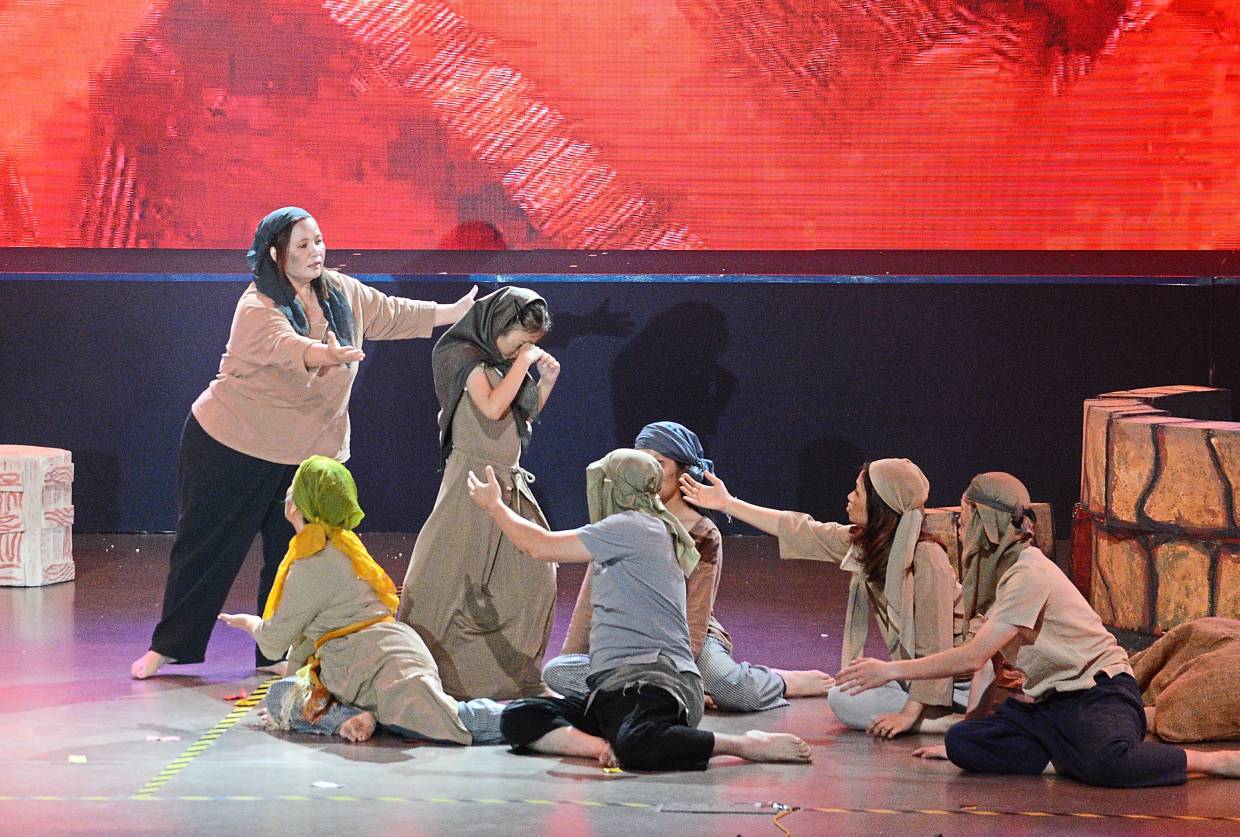 The Israelites lamenting their plight under the rule of the Egyptian pharaoh.

The show doubled up as a fundraiser for 18 charities. The total sum collected over the three nights was RM39,249.

Yeap said the church would be having its New Year’s watch night service at 10pm on Dec 31 at MMC.