Putrajaya focused on injecting safety and liveliness into city

The high-tech Putrajaya Command Centre is aimed at increasing safety in the city. — Bernama

PUTRAJAYA Corporation (PjC) continued to improve on its speed of service and quality of life for stakeholders in the administrative capital by launching its One-Stop Centre (OSC) 3.0 in March.

The OSC helps speed up the development plan approval period from several months to just two weeks after submissions.

The upgraded version of OSC receives, records and monitors all development plan submissions up to the issuance of Certificate of Completion and Compliance.

The online system also allows both applicants and technical agencies to check on the progress of the submissions, at anytime and from anywhere.

Recognised and endorsed by Housing and Local Government Ministry, OSC 3.0 is now being emulated by six other local authorities including Kuala Lumpur, Nilai, Subang Jaya and Johor Baru for trial and testing.

PjC president Datuk Dr Aminuddin Hassim had said that the OSC system would continue to be improved and the next update would enable elements such as geographical location and building information to be included.To help the business community, big and small, PjC launched e-Licence (ELP) and Putrajaya Community Business Centre (Putra Point). The ELP system enables all licence related matters to be dealt with electronically.

Meanwhile, Putra Point — a 800sq ft space with facilities such as display area, discussion room, e-biz corner and mini cafe — in Putrajaya’s Precinct 16 Neighbourhood Complex serves as a platform for entrepreneurs to run their businesses and marketing activities.

To improve safety and security of the city’s dwellers, Putrajaya Command Centre (PCC), a central surveillance hub fitted with technology such as Smart closed-circuit television (CCTV) cameras, was launched.

A total of 262 CCTV cameras with Intelligent Video Analytic (IVA) technology and 39 panic button units are connected to PCC. The cameras were installed to keep watch of safety, traffic, environment, infrastructure and natural disaster. The IVA technology detects road safety concerns and suspicious incidents then automatically alert the authorities. Putra Point in Precinct 16 offers facilities such as e-biz corner and display space.

The blueprint is based on six core principles which are race, social, education, economy, governance and physical infrastructure to face the challenges of living in the administrative capital.

The Bird Race which was held in collaboration with Nature Educational Society aimed at promoting ecotourism and the city as a destination for urban birding activities. A total of 300 participants took part, recording bird species in Taman Wetland, Taman Botani and Taman Rimba Alam. Federal Territories Minister Khalid Abdul Samad with Aminuddin and the team who made it into Malaysia Book of Records as the first relay team to complete seven multi-disciplinary sports continuously.

Another memorable occasion was when seven PjC staff, including Aminuddin made it into the Malaysia Book of Records as the first relay team to complete seven multi-disciplinary sports continuously.

Aminuddin completed a 5km horse ride, while the others did a 10km run, 40km cycling, 1.5km swimming, 3.5km canoeing, 40-storey stair climbing and base jumping from 40-storey high, all in less than six hours. 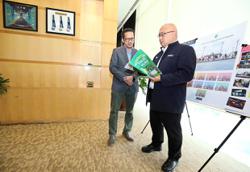 Instilling green habits among the young