Vogiatzakis (left) with Ramakrishnan during a meeting in Johor Baru on the Kuntum sponsorship. — THOMAS YONG/The Star

JOHOR BARU: Vernacular school pupils need to read more books or magazines in Bahasa Malaysia to improve their proficiency in the national language.

State unity, domestic trade and consumerism committee chairman Dr S. Ramakrishnan said this would help the pupils when they move to secondary school where the medium of instruction would be Bahasa Malaysia.

“I have always emphasised on the importance of learning and mastering Bahasa Malaysia whenever I visit Tamil schools statewide, ” he said.

Ramakrishnan added that he was concerned the pupils, who were more exposed to Tamil or Chinese while in primary school, may face a “culture shock” when lessons are conducted in the national language in secondary school.

He encouraged pupils to pick up a book regularly from their libraries to improve their language skills, especially Bahasa Malaysia.Ramakrishnan, who met with Star Media Group chief executive Andreas Vogiatzakis here, has agreed to sponsor the Kuntum magazine to four Tamil and four Chinese schools in Labis beginning next year.

“I hope the magazine which will be given to the schools’ libraries will help the pupils improve their Bahasa Malaysia, ” he said, urging the corporate sector to sponsor the magazine, published by The Star for about 40 years now, to more schools statewide.

Ramakrishnan hoped to fund a pilot project on coding, robotics, science, technology, engineering and mathematics for at least 10 Tamil schools next year.

“The state will sponsor the poor students for this project, ” he said.

Vogiatzakis, who was on a working visit to the state, earlier met with Johor Baru Newspaper Vendors Association president Tee Seng Howa and his committee members.

During his meetings here, Vogiatzakis explained about The Star’s many products, including video-on-demand service dimsum, Kuntum magazine and The Star’s Bahasa Malaysia portal mStar Online. 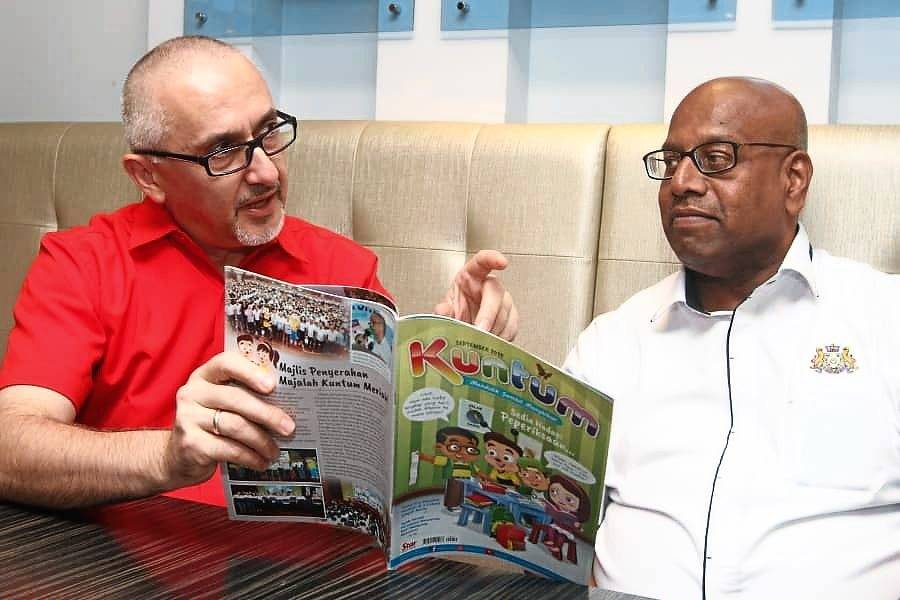 Vogiatzakis (left) with Ramakrishnan during a meeting in Johor Baru on the Kuntum sponsorship. — THOMAS YONG/The Star

Vogiatzakis (seated fourth from left) with Tee (seated third from right) after a meeting in Johor Baru.