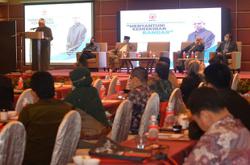 Khalid says there needs to be a definition of what constitutes urban poverty.

FEDERAL Territories Ministry may set set up a think tank to find solutions to urban problems such as poverty and traffic congestion.

“It is important to get input from old-timers with experience in the field, ” said Federal Territories Minister Khalid Abdul Samad at a press conference after launching the “Eradicating Urban Poverty” seminar in Kuala Lumpur.

The seminar is the first of many to get input from various parties, including non-governmental organisations, the private sector, academics as well as community and religious leaders to resolve urban poverty.

Khalid said one of the key aims of the seminar was to agree on a definition of urban poverty.

“Can it be defined solely by household income?

“How about two couples with a household income of RM4,000 each, one couple has one child and the other has five or six children. Can they come under the same category?

“We need a master plan specifically to eradicate urban poverty.

“But first, we need to have a registry of the poor in the city.

“A census needs to be conducted because there are some who do not agree that the B40 group should be considered urban poor.

“Only with an accurate registry can any effort be executed efficiently, ” he said.

Khalid said the ministry aimed to launch the master plan by the end of 2020.

“I hope the participants will continue to brainstorm and think outside the box for new ideas to eradicate poverty in the next six to nine months as input for the master plan, ” he added.