SIBU: The Sarawak Transport Ministry is looking at designing a better model of riverine transportation for the whole state.

Minister Datuk Lee Kim Shin said an improvement was necessary as such transportation played an important role in the movement of people and goods.

“There are many rivers in the state where 35 of them have been gazetted. Out of this, six major rivers are in the central region and they play an important role in the movement of people and goods,” he said at a press conference after attending a briefing at Sarawak Rivers Board (SRB) Sibu Regional Office.

According to Lee, his ministry is working closely with SRB to improve the state riverine transportation.

“We are now gathering information on what needs to be done to upgrade it,” he said.

The Senadin assemblyman said his new ministry was still in the process of hiring staff to fill various positions. 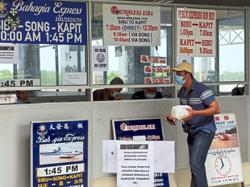