Top picture (Before) and bottom picture (after the makeover)

WALKING into PKNS Complex in Shah Alam, Selangor is akin to being in a mall back in the 1980s as its dated interior appears in need of fresh appeal.

The complex, which opened in 1981, has not been through any major renovation for more than three decades but it still attracts a steady stream of visitors.

The only setback is that they are not shoppers but people heading to the Immigration Department on the complex’s second floor to get their passports or work permits.

The department has been the main tenant since the complex opened.

PKNS Complex was also home to the Selangor State Secretariat which is now located at the Sultan Salahuddin Abdul Aziz Shah (SUK) building, which was completed in 1985.

“We are very proud to have been here for so long as the building was once a prominent place when state offices were located here.

“It is, however, time for the building to go through a change, ” said PKNS Complex acting centre manager Syahril Mohd Rashid.

Syahril, who frequented the complex as a customer in his teenage years, said there were only a few shopping centres in Kuala Lumpur and Petaling Jaya back then, and PKNS Complex was Shah Alam’s first.

“I used to come here with my friends after school. We would have our meals and walk around the area as it was a popular hangout, ” he said, adding that when he took up the job, it felt as though he was returning home.

He said the complex had not changed at all.

“The floor tiles are the same. The shops I used to visit are still here, ” he said.

In 2014, PKNS Real Estate Sdn Bhd (PREC) took over the complex’s administration from PKNS to manage and operate the mall.

“We received many complaints from shoppers and tenants when we took over.

“It was a mess and we did not even know how to start fixing such an old place like this, ” he admitted.

After going through the mall, together with his team, they drew up a list identifying the various issues but emphasis was to be given to tackling priority areas first.

Air conditioning was a major problem for the four-storey complex which has a semi-open air area at its rooftop.

“Many tenants faced air-conditioning issues and we placed wall fans to try and cool the large area. It did not work, ” he said.

Proper ventilation was vital, especially during fasting month, when shoppers thronged the concourse area in search of deals on clothes and food.

“The area was so congested that some visitors fainted so we had an ambulance on standby on most days, ” he said.

After the festive month, Syahril said it was decided that the air conditioning system needed a major overhaul.

“We spent about RM1.3mil in 2017 for repairs, including a change in the ducting system.

“We are happy that it has all worked out well, ” said Syahril while showing the new central air conditioning system.

To give the complex a younger and modern look, PREC in its refurbishment exercise has opted for an industrial design for the facade.

The RM5mil project, which started in 2018, includes renovating the existing food court, prayer hall, five washrooms within the complex and its facade.

The once dingy food court has been totally revamped with a more vibrant look.

“The food court was dark and dirty and customers were afraid to dine there. This affected stall owners who complained of bad sales, ” he said.

With hopes of attracting a younger audience, the dining area is now bright and clean with wooden furniture in its simple setting.

Cabanas, made from wooden pallets and painted in bright colours, have also been set up outdoors for shoppers who want to dine under the stars.

The food court area, however, only occupies a small portion of the rooftop.

Syahril said there were plans to incorporate at least two futsal courts in the future at the rooftop.

“When the futsal courts are ready, visitors can also dine at the food court before or after their game, ” he said, adding that operating hours for the stalls could also be extended once the futsal courts were ready.

Currently, the food court operates from 7am to 5pm.

Meanwhile, its 2,000sq ft prayer hall, located on the first floor, has also been completed.

“We usually get a high volume of visitors during the fasting month, making this area very stuffy and humid.

“The floor outside the surau used to get damp and this made visitors uncomfortable when they wanted to perform their prayers, ” he said.

Today, the prayer hall has washrooms for both women and men as well as shelves for visitors to place their shoes on.

Ventilation was also upgraded and floor tiles were replaced to prevent it from being slippery.

The complex’s facade was spruced up with fresh colours to complement the industrial look which will be incorporated throughout the mall.

After completing the first phase of upgrading works this year, PREC plans to continue work on other remaining areas.

“The second phase may take a longer period of time as it involves lots of technical work, ” said Syahril.

Among the areas identified in phase two are electrical and wiring issues, water pumps, escalators and elevators.

He said PREC was in the process of engaging suitable contractors as well as sourcing for spare parts for the escalators.

“We have three escalators which only take visitors to the first floor but these break down quite frequently, ” he said.

To reduce some of the cost involved, PREC has decided to construct staircases to replace the escalators.

“We do not want visitors to rely solely on the escalators but also be able to use the staircase if they want to, ” he said.

Work to repair and replace some of the escalators will be completed early next year.

Over the past year, many events and activities were introduced to attract people on weekends.

“With so many shopping centres around, it is not easy to get the younger generation to come here.

“We may not be able to offer them what they are looking for but we are trying, ” he said.Most of the tenants have been renting their space for more than 30 years, leaving only a handful of spots available for new tenants.

As such, PREC has introduced an event-space called Tempat Orang Lokal on the ground floor for small business operators who are new in the industry.

“Most of them have online businesses and have never operated in a conventional space, so we are giving them a chance to try a different platform without paying high rental space, ” he said, adding that rent was from RM1,500 to RM1,800 monthly except during fasting month where it would escalate from RM5,000 to RM7,000 for a spot.

Syahril hoped the complex would be the shopping destination for visitors seeking traditional food and clothing come Ramadan next year.

“We get close to a thousand visitors a day during Ramadan and we want to see them shop in comfort, ” he said, adding that it would be a good time to see the newly installed escalators, air-conditioners and lifts being used at full capacity in coping with the large number of visitors. 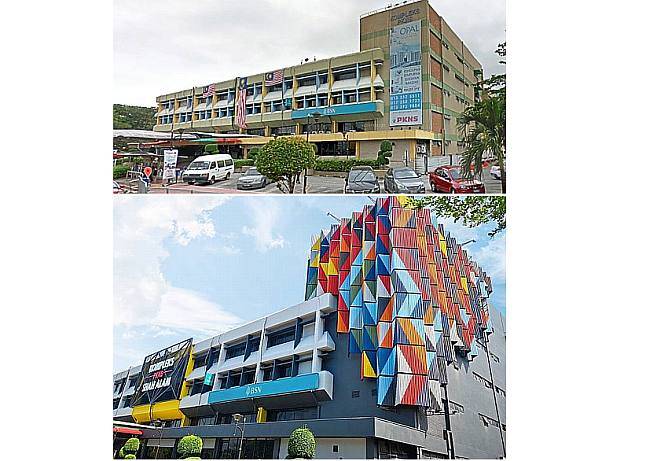 Top picture (Before) and bottom picture (after the makeover)

Syahril who frequented PKNS Complex in his teenage years, is now looking at ways to revive the place.

Visitors to PKNS Complex are still able to find barber shops which have been operating here for decades.

(Far left) Eng Wah Cycle is one of the complex’s oldest tenants.

Escalators which have been out of order for some time will be replaced next year.

The new Makan @ Bumbung is carefully designed to attract the younger generation to the food hub.

The big space on the ground floor has been converted into a permanent bazaar area to attract more shoppers to the complex. — Photos: LOW BOON TAT/The Star