THE Latin American Film Festival (LAFF) comes to Penang for the first time next month, and locals will get to enjoy it for free.

A selection of eight acclaimed Latin American and Caribbean movies will be screened at Golden Screen Cinemas (GSC) Gurney Plaza from Dec 5 to 8.

Covering a wide range of genres from romance and comedy to drama and documentary, they will give cinephiles a taste of the Latin America’s rich culture and unique way of life.

The festival is organised by the Latin American and Caribbean Embassies in Malaysia. Its debut in Penang follows many successful years in Kuala Lumpur.

“This year, as we celebrate the 18th edition of the Latin American Film Festival, we decided to finally expand to Penang.

“We hope this festival will make Latin America feel closer to people in Penang, ” said Carlos Ceglia, Ambassador of Brazil to Malaysia.

The festival will have its opening reception on Dec 3, featuring the Brazilian flick ‘10 Seconds to Glory’.

The occasion is by invite only and set to be opened by Penang Chief Minister Chow Kon Yeow.

The public screenings begin on Dec 5.

Interested parties can redeem tickets starting Dec 3 at the GSC Gurney Plaza box office. These are available on a first-come, first-served basis.

Featured titles include ‘The Distinguished Citizen’ from Argentina, ‘Why Do My Friends Cry?’ (Cuba), ‘Bad Lucky Goat’ (Colombia), ‘Tear This Heart Out’ (Mexico), ‘Old Friends’ (Peru) and ‘The Engineer’ (Uruguay).

The films are in Spanish or Portuguese but will have English subtitles. As is tradition, the festival also features a guest country, Canada, with the film ‘Hadwin’s Judgement’.

Updated schedules, synopsis and further details can be found at www.gsc.com.my and www. facebook.com/LatinAmericanFilm 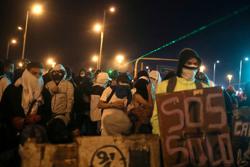