The existing Pangkor jetty will be demolished to make way for a new structure to accommodate larger tourist arrivals and house the Customs, Immigration and Quarantine Complex.

PULAU Pangkor is set to shine once the new year rolls around.

While the small 8sq km island has been somewhat overshadowed by its peers throughout the years - it tends to fall under the radar from the lack of consistent commercial promotions among other reasons - the time may finally be right for it to step into the limelight.

With the commencement of its duty free status on Jan 1,2020, it is certainly an exciting time with developments fast unfolding on the island and in the vicinity.

Among the most visible changes in recent months are welcome improvements to the road, rail and air connectivity between Pangkor and the rest of Peninsular Malaysia. Moreover, the island itself is also seeing rapid changes in terms of infrastructural upgrades, to prepare for Visit Malaysia 2020 and beyond.

As most of the travellers to the island come from Kuala Lumpur and other parts of the Klang Valley, those driving up from the central region have the most to cheer about at the moment, as the road networks - and the existing and new highways that complement it - have been much improved of late.

There has been steady progress in the West Coast Expressway construction, with the partial opening of several sections along the 233km-long highway. Sections 9 and 10 for the 45km Kampung Lekir-Beruas stretch were recently opened to road users in mid-September, cutting travel time by 30 minutes between the two locations. The opening of West Coast Expressway’s 19.1km Hutan Melintang-Teluk Intan stretch on May 31 is a good start to increase accessibility to Pangkor.

Earlier this year in May, the 19.1km stretch between Hutan Melintang and Teluk Intan called section 8 was also opened, effectively cutting 11 minutes off as compared to travelling via federal road FT005.

If construction for the other stretches between Kuala Lumpur and Lumut are completed as planned next year, this will halve the current three hour travel time to Lumut - commonly referred to as the gateway to Pangkor.

Likewise for those coming from up north. It used to be a tough journey for travellers driving from Taiping to reach Lumut. Taking a trip down south from Taiping - incidentally Perak’s second largest town - would mean fortifying your willpower to sit through the notorious traffic jam to reach Lumut.

While navigating the winding roads to the coastal town is also a problem, the largest cause drawing the ire of motorists who traverse the route is the numerous traffic lights along the way, as these collectively add 30 minutes to the total travel time, bringing the journey to one-and-a-half hours.

Interestingly enough, this route likely held the dubious honour of having the highest number of traffic lights in Perak at one point, with a 2011 report by The Star noting 34 traffic lights along the 79km stretch linking Jelapang to Lumut.

While the much-awaited Oct 1 reopening of Pangkor Airport has been delayed, reportedly because flight operator SKS Airways Sdn Bhd’s sole aircraft to ply the route is still awaiting safety and technical inspection, there is progress in other areas to make the area more accessible by air as well.

More air services flying to Ipoh will boost visitors to Perak’s capital city and by extension, to Pangkor.

Perak Mentri Besar Datuk Seri Ahmad Faizal Azumu said that the government allocated RM150mil for the upgrade of the Sultan Azlan Shah Airport during the Budget 2020 tabling. The 500m runway extension plan will open up routes to southern India and cities in southern China. Pangkor’s duty free status will commence in January 2020, drawing the attention of both local and international tourists.

Early November, for example, could see the start of direct flights from Ipoh to Guangzhou in China, following the signing of a memorandum of understanding between Scanda Sky and Malaysia Airlines special charter service Amal in May.

More than 1,000 Business Class tickets were sold in mid-October for trips scheduled between Oct 11 and Oct 31, but as KTMB’s promotional prices for the ETS2 business class coach will be available for trips until Nov 30, the figure could rise exponentially.

The ETS, which passes through 14 stations from Tanjung Malim to Parit Buntar, reportedly saw more than 627,000 users last year. With KTMB’s plans to increase ETS to 50 rides a day, 5.7 million or 15,600 passengers will be able to use the service annually. Although Pangkor Airport’s reopening has been delayed, there is progress in other areas to make the area more accessible by air.

Another key factor set to boost the growth and economy of Ipoh, thereby impacting Pangkor through a trickle-down effect is the RM5bil integrated development project to be undertaken at the Ipoh railway station and its surrounding areas, by a joint venture between the state government’s Mentri Besar Incorporated and Railway Assets Corporation.

Estimated to take between a decade to 15 years, the 78ha project will bring in more residents to the area and create more demand for all modes of transportation, further easing accessibility.

The development will include housing areas, hotels, educational institutions, commercial buildings, as well as green lungs.

It is not just accessibility that is being enhanced. Pangkor itself is seeing infrastructural changes in anticipation of welcoming more tourists to its shores in a few short months.

These recent developments in Pangkor and other areas in Perak boils down to one simple fact: travellers can now access the island more easily to enjoy their holidays, be it to lead the quintessential island life on its pristine beaches and clear waters of the sea around the island, to participate in other lesser-known but equally fascinating experiences, or to possibly partake in duty-free tobacco and chocolate.

Through the Manjung Municipal Council, the Perak government has started talks with businesses to open duty-free outlets on the island, so it is something to watch out for. Chocolate lovers will be glad to hear that they will definitely be able to feast to their hearts’ content, although the jury’s still out on whether tobacco and alcohol will be exempt from tax.

The development of Pangkor Resort World will complement current and future needs in new investment and business opportunities for prospective investors and entrepreneurs in the tourism and hospitality industry.

Around RM5mil has been allocated by the state government to upgrade roads, beautify pedestrian walkways and pavements, as well as its surroundings, with greater public-private efforts to improve facilities, including providing more accommodation.

Other public works are also in the pipeline, with the sorely-needed jetty upgrades possibly starting earlier than initially anticipated. Part of the island’s masterplan is to demolish the existing Pangkor jetty to construct a new structure to accommodate larger tourist arrivals and to house the Customs, Immigration and Quarantine Complex.

With more efficient transport infrastructure, this means the island will see a significant surge in visitors, which will result in increased demand for commercial activities and accommodation spaces.

As such, it opens up a host of new investment and business opportunities for prospective investors and entrepreneurs in the tourism and hospitality industry. The development of Pangkor Resort World, one of the pioneers championing the growth of Pangkor, is set to complement these current and future needs.

All in all, it is safe to say that the next few years will see a transformation for the diamond in the rough, as it works towards achieving its vision of becoming a world-class resort island. 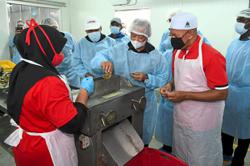