Runners-up of the SPLC2019, Top Glove, were all smiles after collecting their prizes during the prize presentation and closing ceremony of the inaugural edition.

ALL work and no play makes Jack a dull boy. A company that has fun together and works hard together always stays together.

Nowhere was this more evident than during the inaugural Senheng Purple League Corporate (SPLC) 2019 where fans were treated to a wonderful display of “badmintainment” by none other than corporate bigwigs alongside social players who were mixing it up with former national, state and district players.

Where else can you find group chief executive officers or chairmen, putting rank and status aside, battling side by side with their junior subordinates in search of glory for their respective organisations?

Only a handful of people know that Lim was a former district player and he proved it when he rolled back the years with an energetic display although it was not enough to beat Chick Choon Fai-Chick Choon Meng (1-3) from Oppo in the round robin match-up.

“This tournament was good as it showcased our chairman playing in one of the matches, ” said Daphne Ng of the Top Glove team.

“He disclosed to us that this tournament had helped improve his game. He will take this experience on board and hopefully improve on his game as he prepares for the next edition, ” added Ng.

Brought to the public by the team who introduced the Purple League and Purple League Junior, the event aims to promote a healthier lifestyle and also act as a platform for firms to indulge in a healthy dose of competitive badminton.

This very first SPLC2019 had set a benchmark for the organisation of a one-of-a-kind corporate sports tournament that aims to provide a work-life balance for staff who put aside deadline pressures for a day.

Eight top international and local firms featured in the inaugural edition which included Pensonic, LionMas, redONE and senQ drawn in Group A whilst Oppo, Top Glove, Aeon Credit Service and AIG did battle in Group B.

LionMas emerged inaugural champions when they outplayed Top Glove 9-4 in a thrilling finale.

Unknown at the start of the tournament, LionMas stunned their more fancied rivals, with one of their winning points coming from a giant killing act by their men’s doubles pair of Lee Yew Wah-Ti Kian Kok.

“We are very excited at winning this tournament. At first, we were not sure if we could win this tie as our men’s doubles were up against a former national player (Ismail). But we managed to overcome the odds due to the fighting spirit of our team.

“This tournament is a good platform to showcase the talents of our staff who worked hard, ” said LionMas’ team manager Saw Tze Liang.

Established in 1993, LionMas is one of the leading chain of stores dealing in household electrical appliances and furniture.

For their efforts, LionMas were rewarded with a RM50,000 cash prize while Top Glove took home RM25,000.

In the third and fourth placing decider, redPHOENIX proved too strong for Team AIG to run out convincing 10-4 winners and pocket RM15,000 while Team AIG bagged RM10,000 for finishing fourth.

As champions, LionMas claimed bragging rights along with a playoff spot for a chance to qualify for the next edition of Malaysia’s elite professional badminton league — the Purple League in 2020.

The format of the tournament saw each encounter consisting of five matches — men’s singles, men’s doubles (open), men’s doubles (combined age of 80 years or above), women’s doubles and mixed doubles — where a team will aim to win best of five 11-point games in each category.

To add some spice to the tournament, several clubs included former state and national players in their ranks, most notably Kuan Beng Hong and Ong Ewe Hock representing redONE; Ismail, Daphne and Tiffany Chase for Top Glove and Yap Zhen, Kuan Kam Chung and Sannatasah Saniru who donned the colours of team senQ. 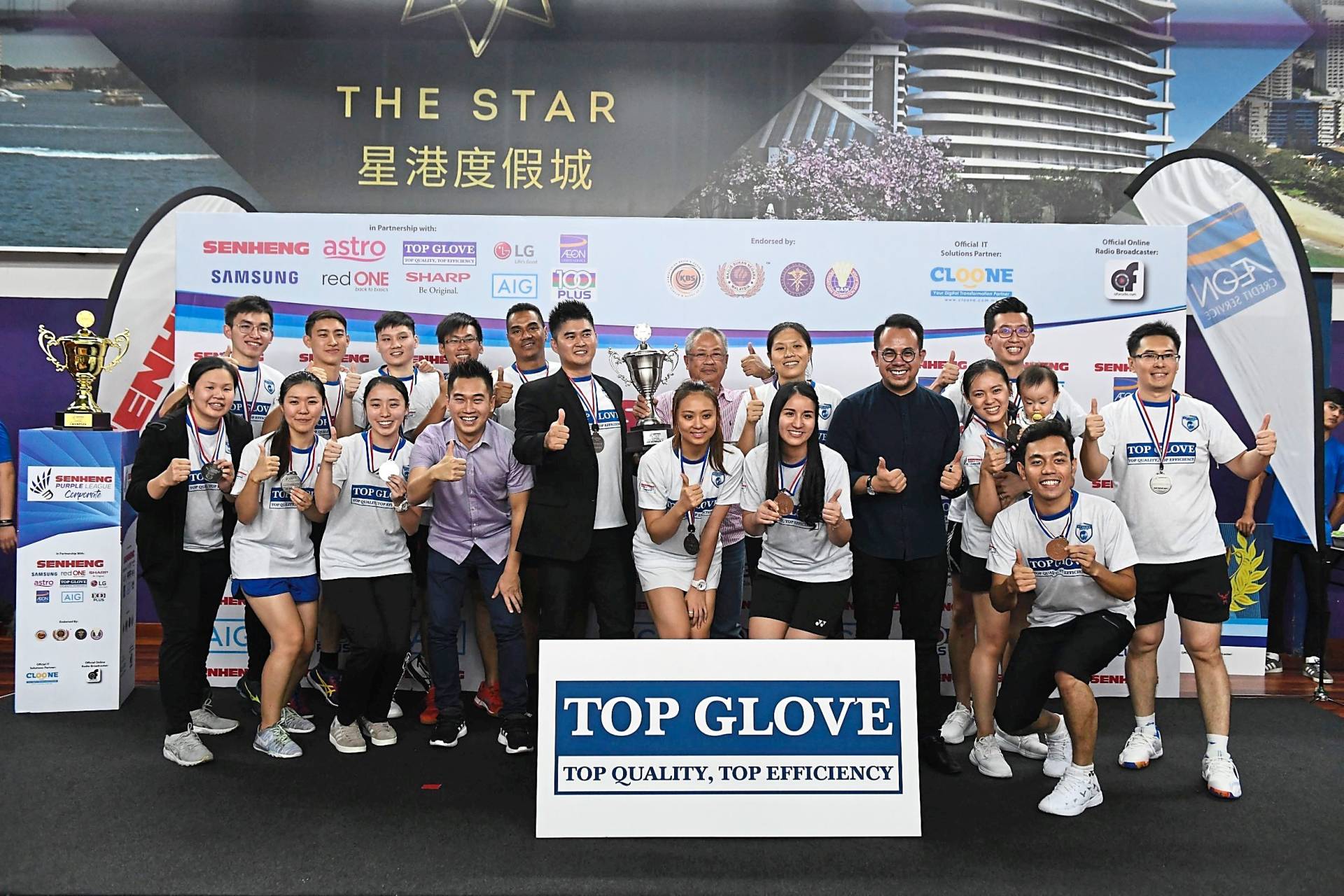 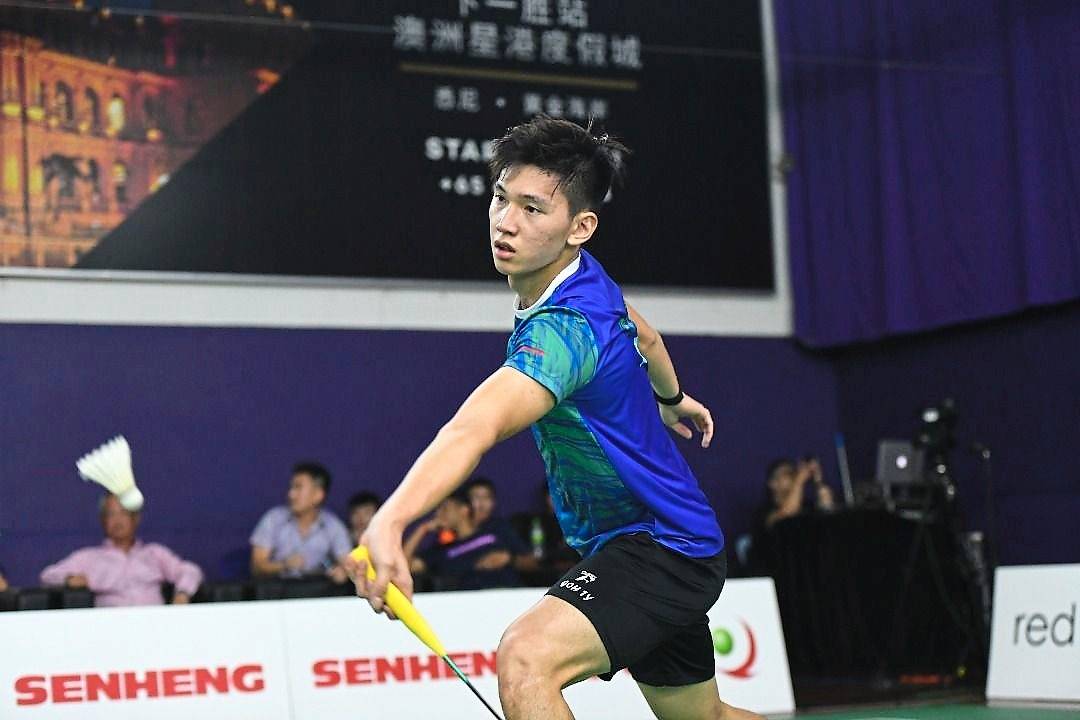 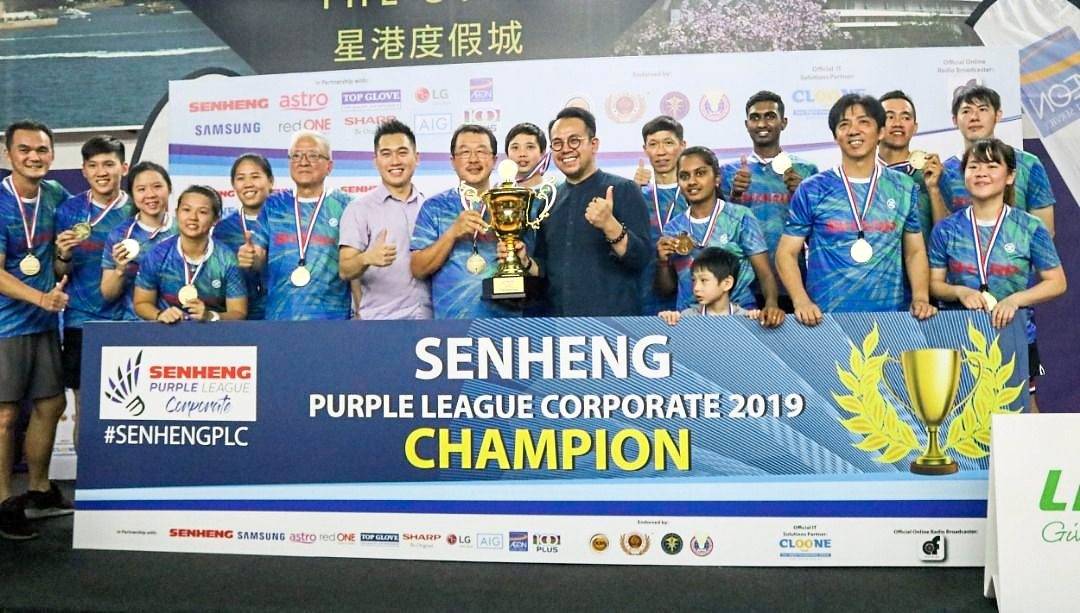 Runners-up of the SPLC2019, Top Glove, were all smiles after collecting their prizes during the prize presentation and closing ceremony of the inaugural edition.

Goh Ting Yu of LionMas in action during the final where he gave his team an early lead with victory over Top Glove’s Lim Jihn Yih in the men’s singles.

The LionMas’ squad celebrating winning the inaugural SPLC2019 after receiving the championship trophy from Sim (centre, in dark blue shirt).

Lim joined in the fun when he teamed up with Muhd Mubin.