By FARID WAHAB and VIJENTHI NAIR

A GROUP of children were playing gleefully at a small badminton court next to a community hall in Kampung Baru as dusk approached.

The word “MAS” refers to the “Malay Agricultural Settlement” – a body set up to oversee infrastructural development of Kampung Baru, a Malay enclave in Kuala Lumpur.

Although MAS still exists, many are questioning its relevance and role, especially as plans to redevelop Kampung Baru gains momentum.

Kampung Baru was opened in the years preceding 1900 for the Malays to cultivate padi in the then Federated Malay States (FMS). FMS comprised Selangor, Negri Sembilan, Perak and Pahang.

A report by then Selangor government acting secretary DG Campbell dated April 13,1901, obtained from the National Archives, revealed the reasons why a Malay-exclusive settlement was needed.

“A previous scheme to provide the Malays with technical education met many difficulties.

“Under the three-year scheme, they became assistants to trained mechanics in local factories and workshops.”

The report explained that the group was not keen to live among the other races who did not practise the same customs.

“Skilled Malays from Negri Sembilan and Perak were also brought in to teach at local schools, ” the report stated.

It further noted that the Malays preferred living in the outskirts of Kuala Lumpur because of the high price of land and houses in town.

The granting of settlement to the pioneers was subject to them meeting several conditions including eligibility for only married couples and making it compulsory that their children attend school.

When Kampung Baru opened for settlement, MAS was formed and tasked with its administration.

A management board which members were nominated by the Selangor British Resident was put in charge.

“MAS was formed as an autonomous body under the Land Code Enactment 1896, which is still valid to this day.

“It had the power to grant permission to married Malay couples to settle in Kampung Baru, ” said Shamsuri.

He elaborated on the criteria used to define a Malay.

“The person must originate from one of the Malay archipelagos, embrace Islam as their religion and practise Malay customs and traditions, ” he said, adding that records were kept in the settlement register.

“When a settler died, the family must report the matter to MAS. It would then arrange for the land transfer using the Islamic law of faraid, ” Shamsuri explained.

“Under faraid, male heirs receive two thirds of the inheritance and female heirs, one third.”

He said that any proposal to erect a new building in the settlement also required approval from MAS.

“If the settlers built and rented out their units, MAS was entitled to 7% of the rent, ” he said.

National Archives records revealed that there were settlers who applied for loans from MAS to build houses.

MAS maintained ownership over the land until 1968 when the Selangor government undertook the first redevelopment.

“The settlers were given a grant for the land and ownership was transferred from MAS to individual qualified title holders.

“Settlers could use their land elsewhere as a collateral to borrow money from Selangor State Development Corporation (PKNS), after which they were given RM20,000 to build a house.

“If you see two-storey houses in Kampung Baru, those were built during that time, ” he said.

Shamsuri said there were currently 32 plots for which owners could not be traced. The land is still registered under MAS.

“This was because the settlers did not claim their titles, ” he said.

“In Kuala Lumpur, to build any structure one must get approval from DBKL. This meant landowners were now under two jurisdictions, DBKL and MAS, ” said Shamsuri.

He said this caused jurisdictional overlap between MAS and DBKL which has remained unresolved to this day.

“Many from the younger generation in Kampung Baru know little of MAS and its history.

“However, this does not mean MAS is obsolete, as the enactment upon which it was founded is still valid.

“Efforts must be taken to restore MAS as an autonomous body in Kampung Baru, ” said Zainudin.

The Kampung Baru settlement register which is more than a hundred years old.

“The Kuala Lumpur mayor is actually the head of MAS but he only sends a representative to meetings. Thus, he does not have a clear picture of the decisions made by MAS, ” he said.

Shahrom noted that the mayor also had a representative in the Kampong Bharu Development Corporation (PKB).

“MAS should do more to locate the owners or heirs of the 32 plots that are still registered under it, ” he added.

In a statement to StarMetro on Thursday (Nov 21), DBKL said the mayor was never appointed as the head of MAS.

"Nor Hisham has also never attended any MAS meetings since assuming his role as mayor," the statement read.

Shamsuri said there were attempts to dissolve MAS following the formation of PKB in 2011.

“However, following strong objections from MAS and landowners, the government scrapped the decision.

“MAS is the last nexus between the Selangor Palace and Kampung Baru, unlike PKB, ” said Shamsuri.

Zainudin, however, had a different view.

“Within PKB board of directors, there is one representative from the Selangor Palace. This is in accordance with the Kampong Bharu Development Corporation Act 2011 (Act 733).

“This means a link between the palace and Kampung Baru exists, ” he said.

At present, MAS’ management board comprises the various village chiefs in Kampung Baru who in turn choose their advisers and secretaries.

A source in the Federal Territories Ministry said Minister Khalid Abdul Samad would be meeting Selangor Ruler Sultan Sharafuddin Idris Shah to discuss the relevance and role of MAS, given the current circumstances.

“MAS was established under an Act. However, many Acts have superseded it, including one which put Kampung Baru under DBKL’s jurisdiction after the formation of the Federal Territory of Kuala Lumpur.

“The Attorney General’s Chambers has given its views on the matter.

“So, Selangor needs to make a decision as the matter comes under the state’s jurisdiction, ” said the source.

Wooden houses in Kampung Baru hark back to a time before Kuala Lumpur became a bustling metropolis.

There have been many attempts to redevelop Kampung Baru, which is considered a goldmine because of its location right smack in the centre of Kuala Lumpur.

On Oct 25, Khalid improved on the government’s last offer.

He said Kampung Baru landowners would be offered RM850 per sq ft for their land, and an additional RM150 per sq ft in the form of shares.

Khalid described this as the government’s “final and best offer” to acquire Kampung Baru land, adding that landowners who opt to buy a unit in the new development project would also get 15% discount.

“The shares will be in a special purpose vehicle (SPV) for the development project to be set up in the future.

“This means landowners will continue to have rights over the land that is developed, and will get returns from the development, ” said Khalid in a news report.

The gross development value of the finished project is estimated to be about RM30bil. 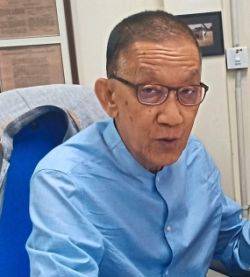 Shamsuri described the latest redevelopment plan as a “tall order”, saying various issues needed to be ironed out such as the small size of individual plots and multiple ownership. He cited the example of a lot with 62 owners.

“PKB held a census from Nov 1 to 21 last year to gather input from landowners. However, early this year we heard of the recent plan where landowners would have to sell their land, ” he said.

On Oct 22, StarMetro reported on Pewaris’ alternative redevelopment proposal, which involved issuance of a bond by the government with Pewaris being in charge.

However, Shamsuri cautioned against such a plan because as an association, Pewaris has no locus standi or proven experience to undertake such a development.

In an earlier report, Khalid said he was hopeful Kampung Baru landowners would agree to the latest offer.

“Kampung Baru was created to ensure the Malays were not displaced from the capital and would have an enclave which is protected.

“Being protected does not mean that it should not be developed.

“They should not look upon it as their personal properties because that was not the reason why it was given to them, but with the intention of developing it so that they can profit from it, ” added Khalid.