VISITORS to Escape Theme Park will get to ride the country’s first chairlift up a hill, just like in the Swiss ski slopes. Except this chairlift takes you up woodlands to the top of the world’s longest water slide at 78m above sea level.

The chairlift and the water slide, which is called Gravityplay, are under Escape’s third phase of development.

Escape chief executive officer Sim Choo Kheng said the chairlift is the country’s first while the slide scored a Guiness World Record entry as the world’s longest, at 1,111m.

“This award is real, an award we cannot get by influence or buy.

“And it makes me recall all the challenges we have been through, ” he said at the recent official opening of Escape Phase Three in Teluk Bahang, Penang.

Sim remembered the park’s opening day on Nov 7,2017, when they had to wait a whole hour for their first customer.

“We ended the day with only 23 customers. I was worried. I was scared if my ‘kampung’ concept theme park would indeed be a ‘gone case’ as many investors, banks and venture capitalists had predicted.

“But it has been seven years now, and we have gone from getting 23 customers that day to having 650 customers daily on average.

“We have gone through all sorts of challenges, and we are ready to bring this Penang brand to the world.

“Penang is the birthplace of this park and we are committed to helping Penang play its role in tourism development.

“We are seeing more visitors coming to Penang because of Escape, and we hope we can work hand in hand with the state to make Penang the number one tourist destination in the region, ” he added.

Chief Minister Chow Kon Yeow said the park has been the leading tourist attraction in Penang and the number one theme park in Malaysia, going by TripAdvisor’s ratings.

“According to Penang Immigration Department, visitor arrivals hit a record high between January and August this year, increasing by 207.7% over the same period last year.

“Many of them came to visit Escape, as a study by Universiti Sains Malaysia recently found 10.9% of domestic and international tourists were here for Escape.

“This is a remarkable statistic and testament to the importance of Escape to both Penang and Malaysia’s tourism growth ambitions.

“Escape embodies every facet of what Penang is trying to achieve in both tourism and green initiatives.

“This is because the retro-eco theme park is situated within the natural environment, reintroducing fun within safe and natural settings through self-directed play, ” he said.

Sim said the memorandum would see Escape and GSPARX building a photovoltaic facility to supply renewable energy to the park.

“This will make Escape the first theme park in Asia to be carbon neutral, which is 100% reliant on renewable energy.

“Once TNB and GSPARX are ready, we will start the project and install the solar panels, ” he said. 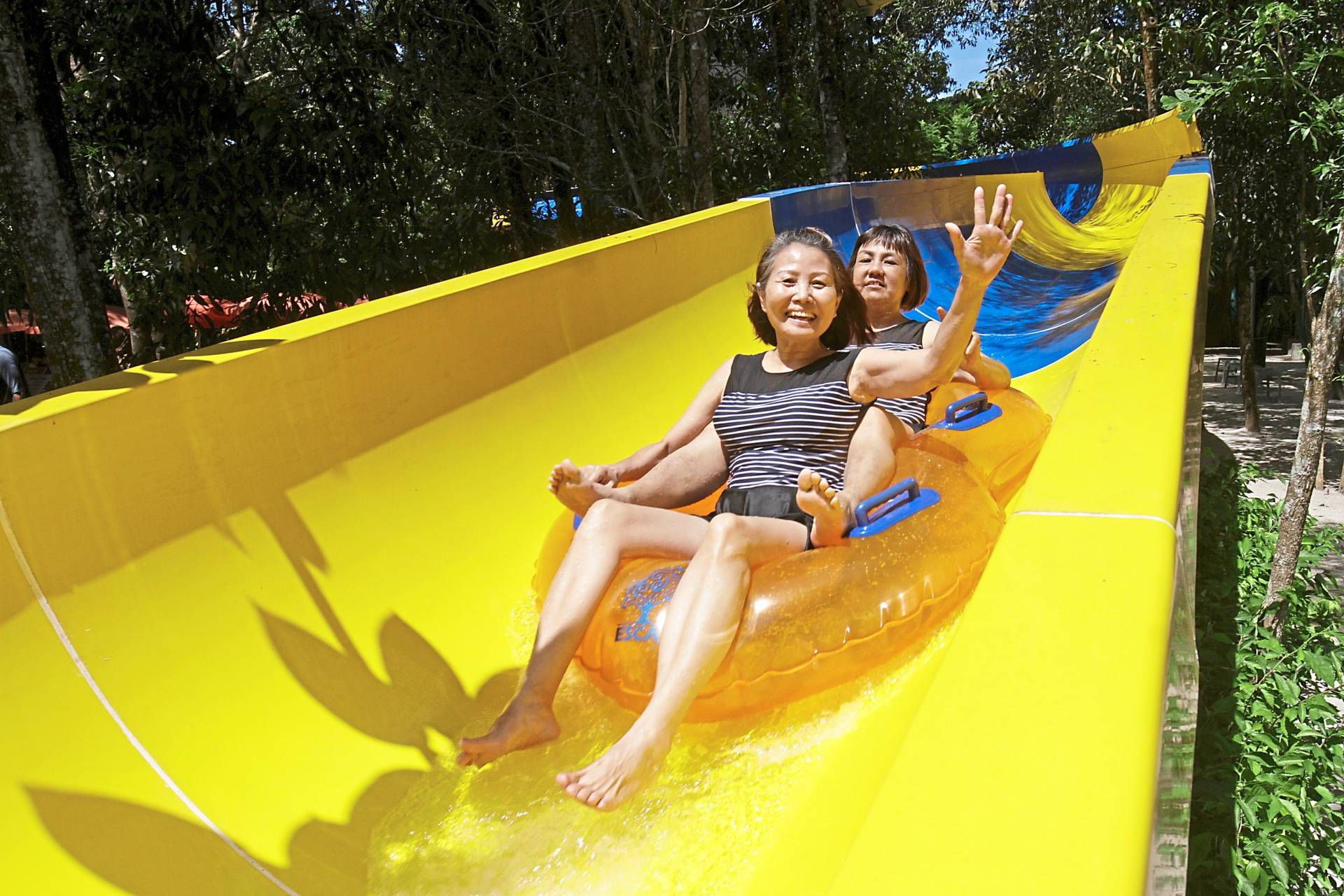 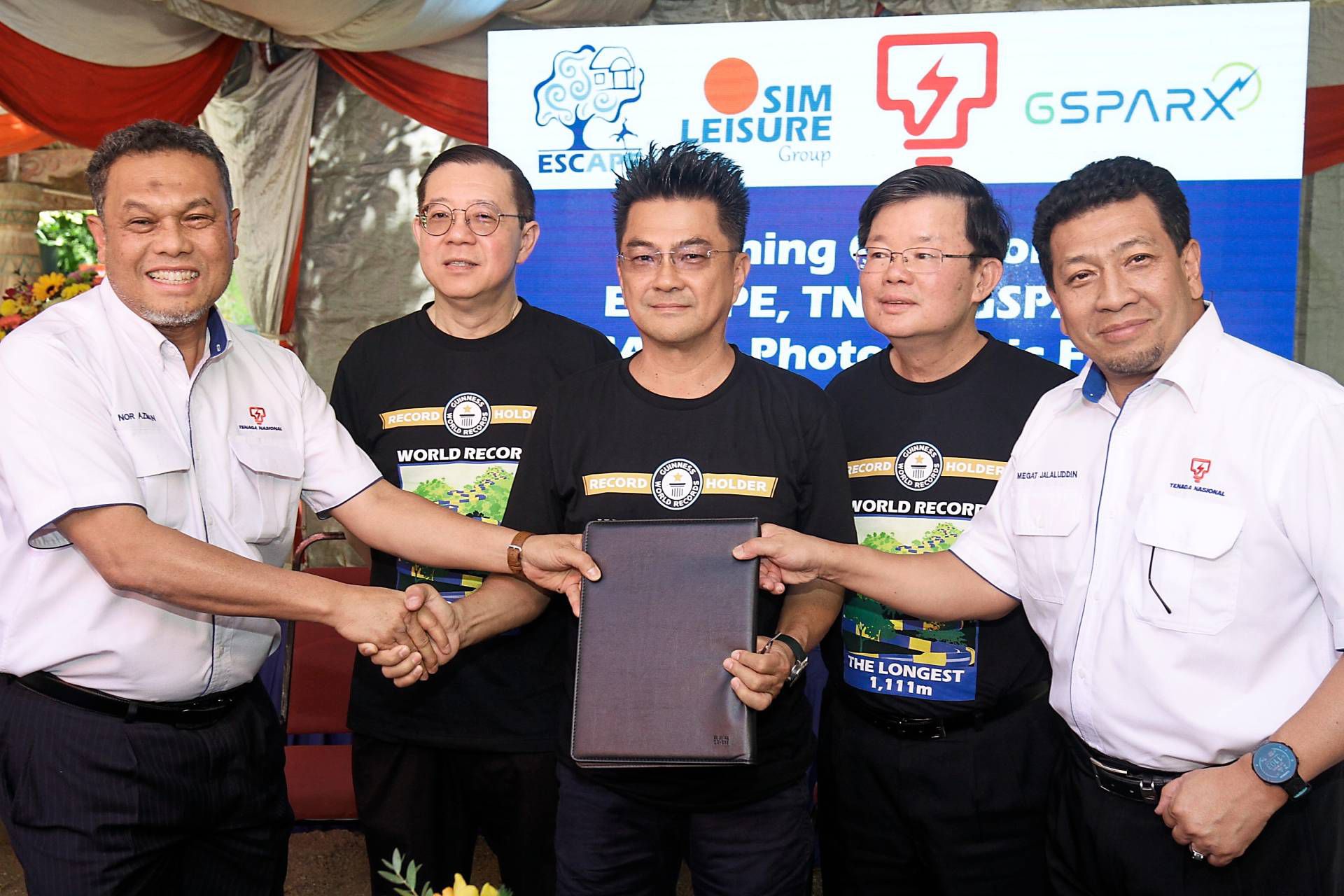 Visitors taking their tubes onboard the chairlift to the hilltop before gliding down the water slide.

(Front row, from left) Nor Azman, Sim and Megat Jalaludin posing for a photo after the signing of a memorandum for the building of a photovoltaic facility. With them are Lim (second left) and Chow.

Visitors getting ready to take off on the chairlift. 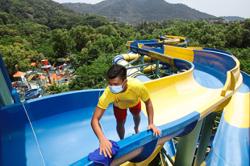 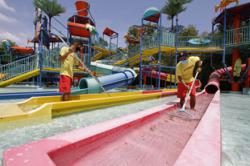