(From left) Ong, Lee and Tan inspecting the condition of the hawker centre.

DIALOGUE sessions will be held to determine the fate of an abandoned hawker centre located across the road from the Taman Kristal apartments in Lengkok Erskine, Penang.

Pulau Tikus assemblyman Chris Lee said the building was not properly established and had not been used for many years.

“The hawker centre was built as part of the town planning project more than a decade ago. It has not been used since the beginning.

“Residents nearby only use the underground car park as Taman Kristal is a high-density apartment with many residents.

“We are taking the next step forward after the building has been left empty for so many years.

“We will be getting the opinions and feedback from the residents nearby so that we can come up with a better plan,” he said when met during a dialogue session at the Balai Rakyat Mount Erskine in Lengkok Erskine recently.

He said they would be focusing on the residents in the Lengkok Erskine area for a start.

Next, they would organise the Penang Sihat programme at Taman Kristal besides having a dialogue session with the residents there.

Lee said the dialogue sessions were meant to get ideas and opinions from the residents before taking the next step.

“We hope that the sessions will be fruitful so that we can gather as much information as possible to benefit the community here.

“Although the building is a property of the Penang Island City Council, we feel that it is better to engage the people and know what they want so that we can make a better long-term decision.

“We hope that by the end of this year, we will have a concrete direction on what to do next,” he said, adding that he would chip in some constituency funds if a major renovation was required.

“We will be organising focus groups so that the people’s voices can be heard before the council decides on the usage of the building,” she said.

“As it is an abandoned building, we need to find out if there are any social issues and misuse that happened here before.

“The GRPB method allows the people’s voices to be heard and it is a bottoms-up approach.

“Turning the building into a car park will only benefit certain people but we hope to come up with a plan that benefits everybody.

“PWDC will help to engage the people and provide data for the government so that a fair solution can be achieved,” she said. 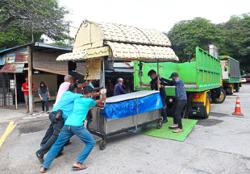