Over 1,000 revellers have ghoulish good time at top-drawer Halloween party

Participants of the Halloween Fitness Dance Party sweating it out.

LOCALS and visitors alike had a ghoulishly fun time at The Top Penang’s spine-chilling Halloween party themed ‘A Nightmare On Killer Clown Street’.

With the attraction’s normally colourful and cheerful theme park transformed into a spooky and gory street for the night, horrors lurked at every corner.

Faux blood stains and body parts as well as hair-raising wails piped in through speakers added to the scare factor. But it was all in good fun.

The Top Penang general manager Joel Law said the event was the largest Halloween party in the state and attracted some 1,000 visitors.

“We’re delighted to see Penangites and tourists enjoying the occasion. In drumming up to Experience Penang 2020, we will take the lead in organising and bringing in more events that will attract tourists to the state, ” he added. A scary clown terrorising a victim during the performance themed ‘A Nightmare on Killer Clown Street’.

Launching the recent event was guest of honour Siti Hajar Mohd Yunus, deputy director of the Malaysia Tourism Promotion Board under the Ministry of Tourism, Arts and Culture.

It was The Top Penang’s second Halloween party, following a successful one last year. This year saw a collaboration with art and design school The One Academy Penang.

Besides the haunting setup, there was also a special Nightmare on Killer Clown Street Performance, Halloween Fitness Dance Party, Not So Scare Meet and Greet session and Killer Clown Bazaar.

Law also announced that The Top Penang has been chosen to host an exhibition for the popular Japanese manga character Doraemon from Nov 26 onwards. 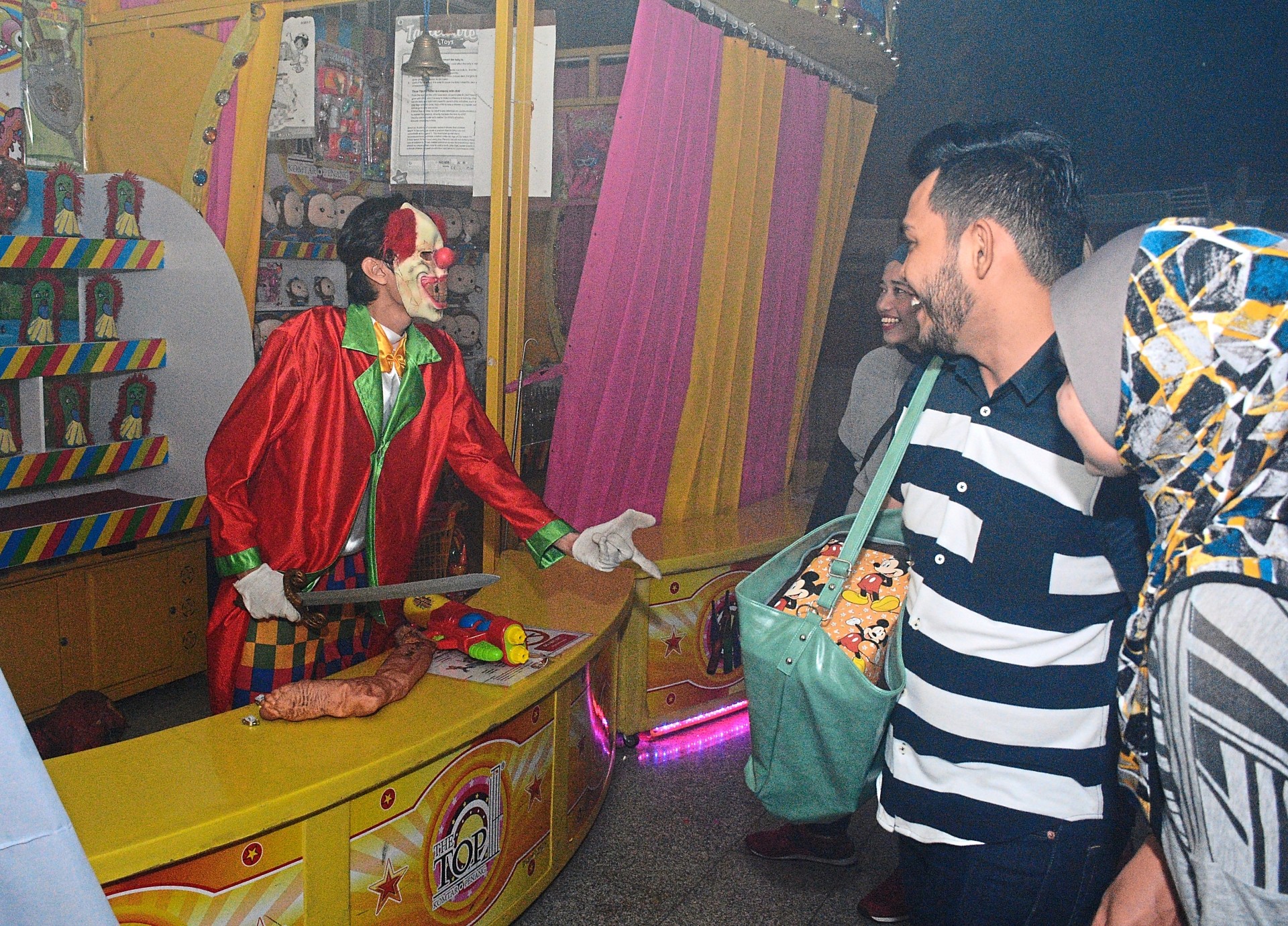 Visitors checking out the killer clown booths located inside the ‘haunted house’.

Making a comeback to the state after a decade, the exhibition this time will feature the character’s famous secret gadgets like Anywhere Door, Take Copter, Guardian Angels and Small and Big Lights, among others.

For the year end, Law said their celebrations this year will include a Christmas Tree adoption programme for corporate entities.

For only RM150 per tree, sponsors will get to decorate a tree and then donate it to charitable organisations of their choice.

After the Yuletide season, one can look forward to the annual New Year’s Eve Countdown Party featuring musical performances and a spectacular 360-degree grand fireworks display.

Currently, there is an early-bird price of RM68 per person, including a drink.

Other ongoing promotions include affordable rates of RM10 for entry to its Penang State Gallery and Durian the King of Fruits attractions on weekdays, and RM20 on weekends.