Reviving interest in board games

CHILDREN put their gadgets aside to participate in tabletop games during the ‘Tabletop: The Awakening’ event at Gurney Plaza in Penang.

Among them were siblings Iman Rijal, 10, Amani Rijal, nine, and Hannah Rijal, five, who listened attentively when they were briefed on how to play ‘Kaki Lima’, a semi-cooperative pick-up-and-delivery type game that was created and designed by a Malaysian. 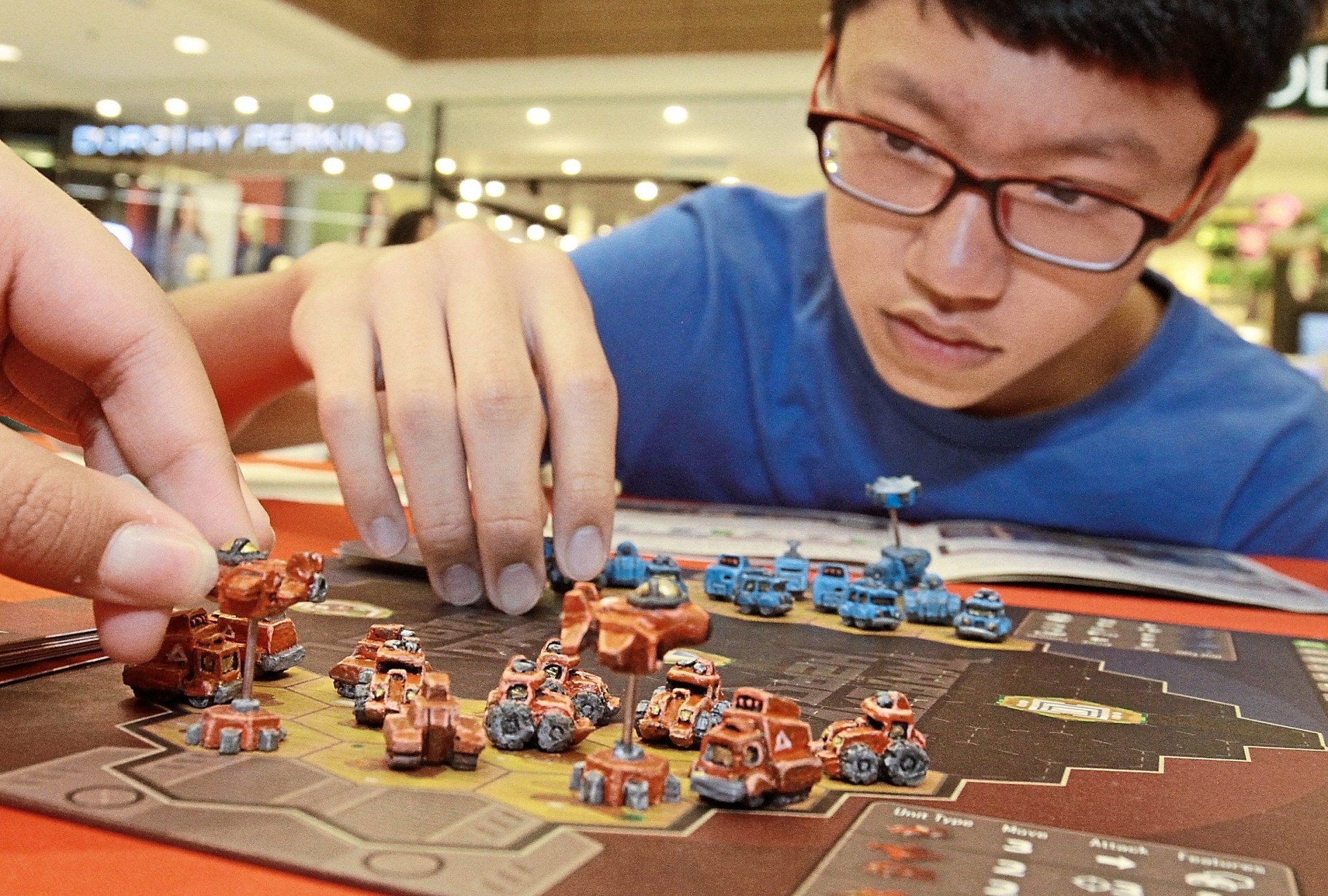 A boy playing with miniature cars in one of the tabletop games.

Their mother Iffah Sidek said she came across the event through the Pulau Tikus Women and Family Development Committee (JPWK) Facebook page.

“Since it is a Sunday, we decided to bring our children out.

“We went for the Pulau Tikus JPWK’s previous programme and it was fun. 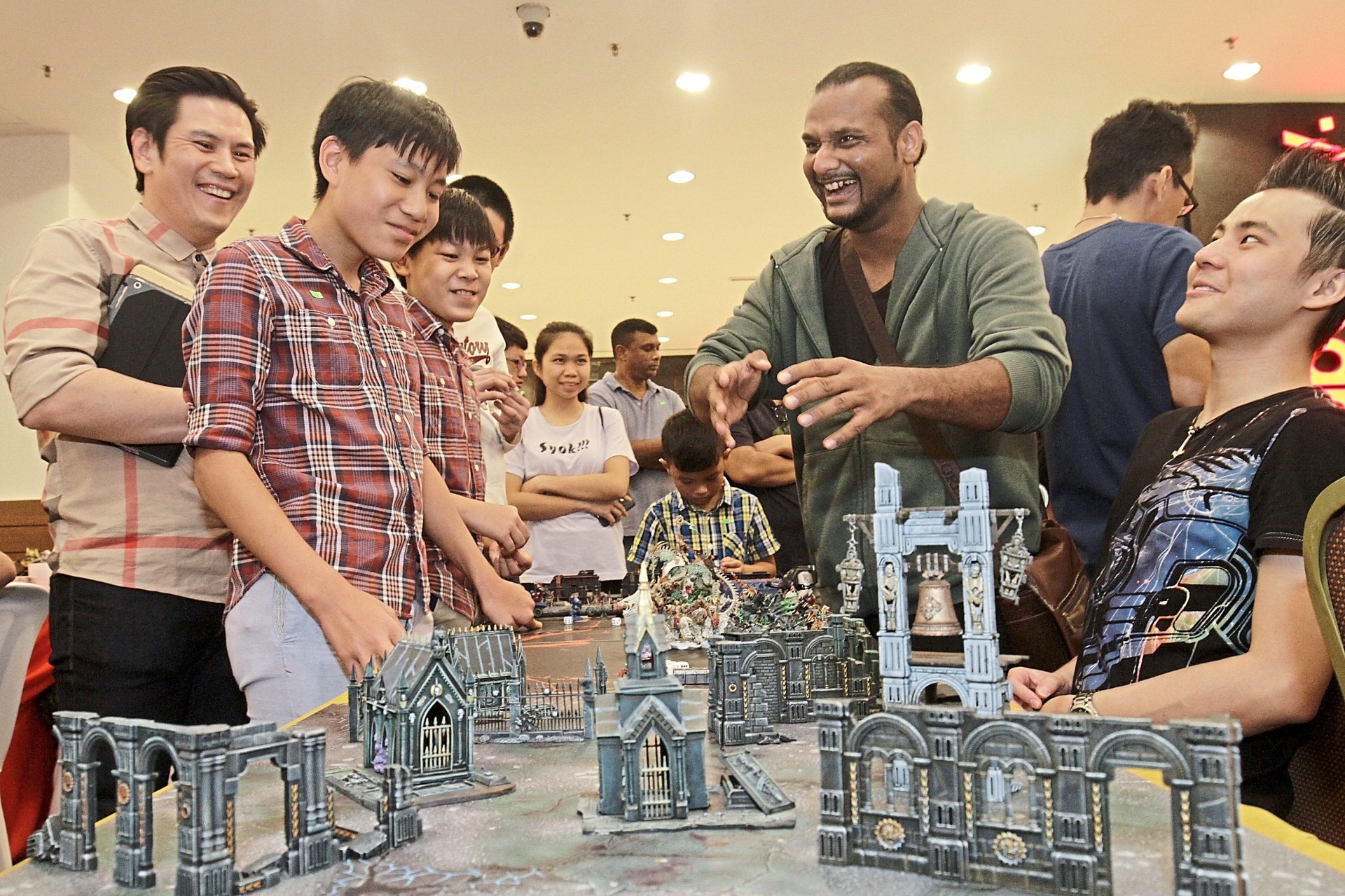 Youths trying out the games designed by locals featured at the event.

“My children enjoyed playing the tabletop games here and it is a good way to spend quality family time, ” said the 37-year-old executive.

Spotted accompanying her four-year-old daughter at the event was Sofia Chang. 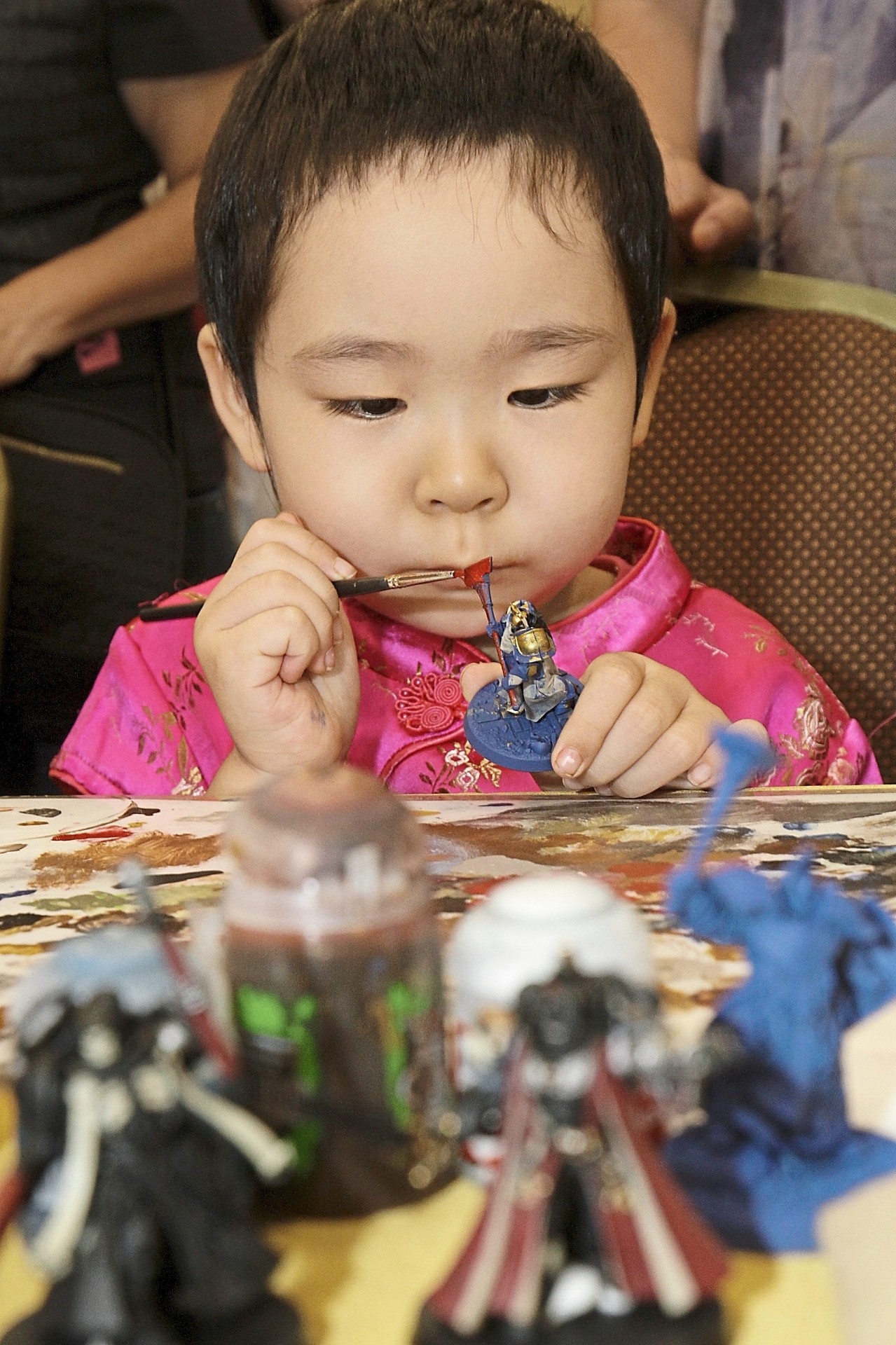 The 43-year-old housewife from Beijing, China, brought her two children to shop at Gurney Plaza when they stumbled upon the event.

“My children like to play board games at home.

“These games are good in developing children’s creativity and thinking skills especially when they are young, ” she said. 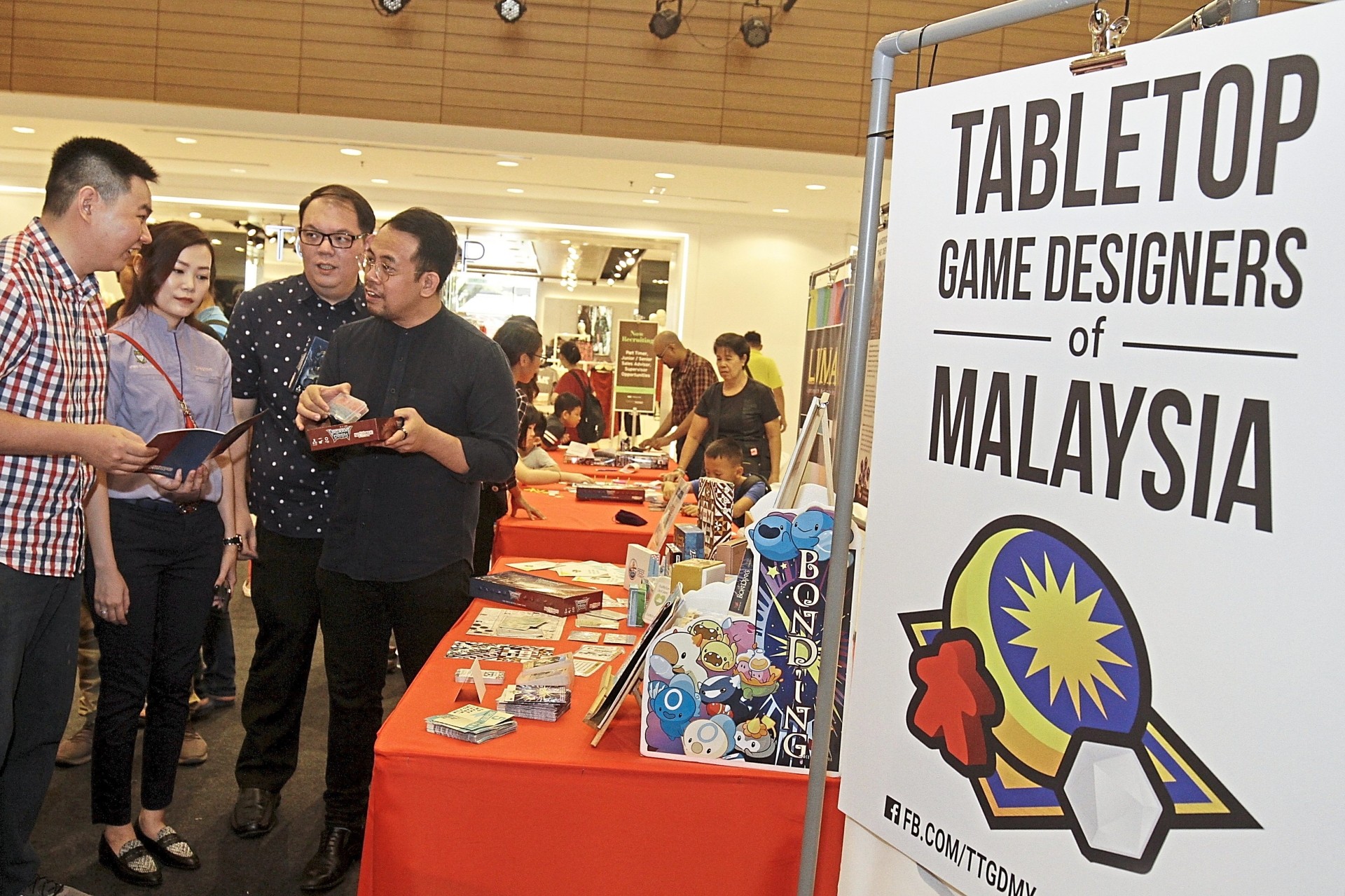 (From right) Sim and Lee checking out the games at the ‘Tabletop: The Awakening’ event.

The ‘Tabletop: The Awakening’ event was organised by the Pulau Tikus JPWK with the aim of encouraging children to not play phones but instead, spend family time and communicate with each other.

Some of the Malaysian games were BonDing, Kaki Lima, Koraptiko, Ace of Math, The Lepak Game and Vagrant Dash.

Deputy Youth and Sports Minister Steven Sim Chee Keong, who visited the event, said he was very proud to see tabletop games that were designed by fellow Malaysians.

“The event really demonstrated the creativity and innovation of Malaysians. A closeup of a tabletop game

“We are all used to playing imported games and today, I realised that there are so many different types of tabletop games designed by Malaysians.

“I was looking at Kaki Lima, a very interesting game. If you have never been to Penang, Kaki Lima would be a very good tool for you to know Penang even before stepping into it, ” he said in his speech.

Sim also said he hoped to work with various stakeholders to see how tabletop games in Malaysia, especially those designed by Malaysians, could be further promoted.

“I am really amazed by the hard work put in by the designers.

“I have invited some of the organisers to come and see me to see how we can further develop this sector, ” he said. 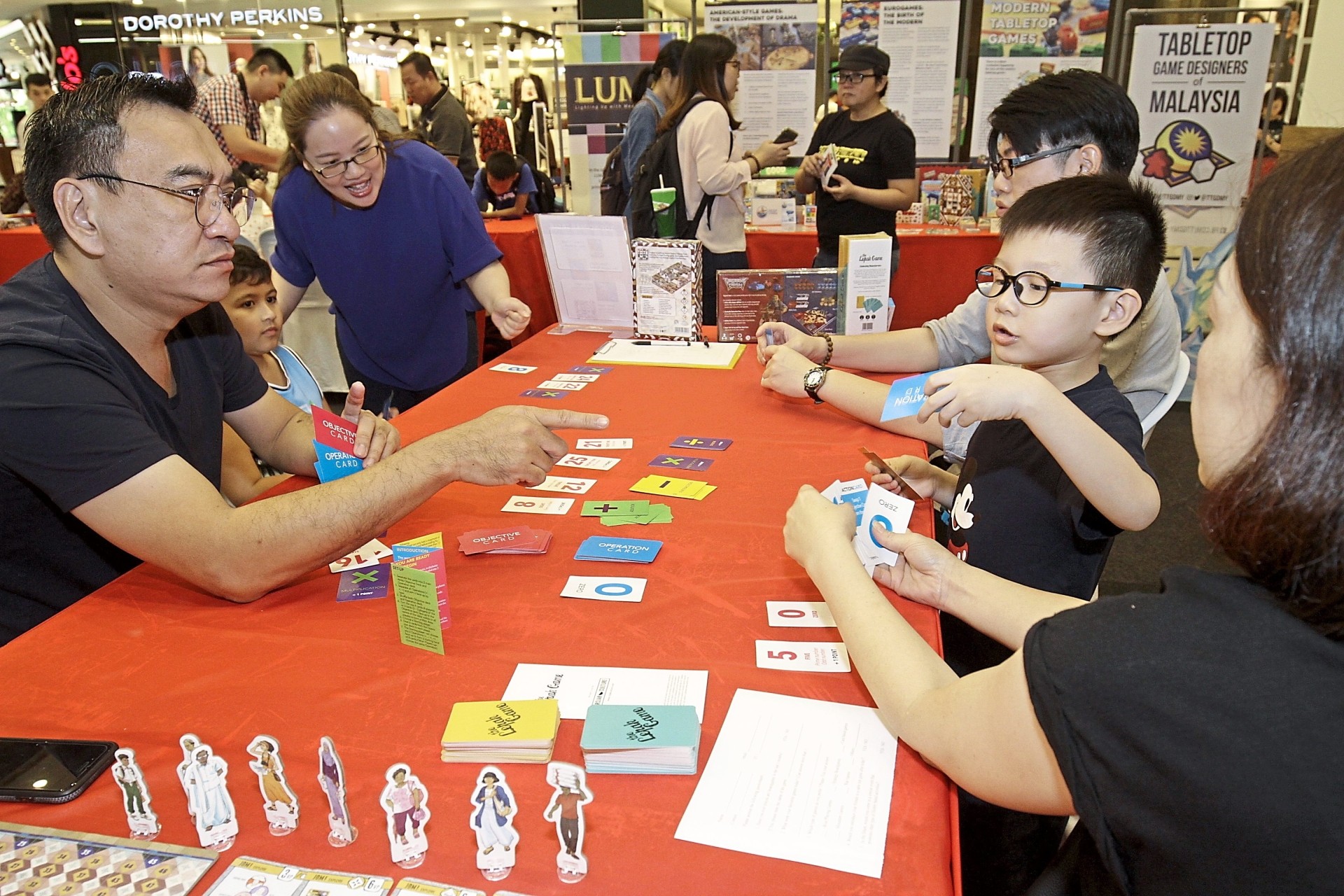 A family engrossed in a game.

“We must create a platform to harness the talent and show what the locals can deliver, ” he said, adding that he hoped for more similar events to be held.