More money for the people 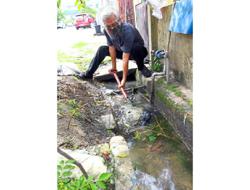 The Budget 2020 announcement includes an allocation of RM100mil for the repair and refurbishment of low and medium-cost strata housing. — Filepics

BUDGET 2020 will boost home ownership, job opportunities, monetary savings and green living, among others in the Federal Territories.

Federal Territories Minister Khalid Samad said the people in Kuala Lumpur, Putrajaya and Labuan had much to look forward to in terms of home ownership measures.

“On the national level, the Government is introducing many schemes to ensure that people can own homes.

“At the ministry level, we are also working on some ideas. For example, to solve the issue of an overhang of about 2,000 affordable housing units, a developer has linked to a bank to work out a rent-to-own scheme, ” he said.

“The four intracity highways are a done deal. The Government is also finalising the deal for the intercity PLUS highways, ” he said, adding that the socioeconomic status was set to improve with the Government’s effort in creating more job opportunities for locals.

Khalid said the ministry would look at ways to capitalise on the allocation after getting a clearer picture.

He stressed that the Government was very serious about renewable energy and offered incentives to those who make use of it, in line with its low carbon cities plan.

On the whole, he said the Budget addressed many pressing issues including education and health, which would benefit all.

He explained that localised issues involving groups such as petty traders and hawkers would fall under the local authorities’ budget.

“The boost in DBKL’s budget for next year is also extra money for the people, ” he said.

“We will adjust our budget based on the additional allocations received from Budget 2020.”

The Budget 2020 announcement included allocations of RM443.9mil for flood mitigation projects and RM150mil for the maintenance of existing flood retention ponds nationwide, besides RM100mil for the repair and refurbishment of low- and medium-cost strata housing.

“It is good that there is some allocation to repair People’s Housing Projects (PPR) and Public Housing (PA).

“We welcome it as the funds will go towards DBKL’s efforts to ensure these housing projects are in good condition, ” said Nor Hisham, adding that there are some 500 PPR and PA schemes in Kuala Lumpur.

The mayor said the issue of flash floods was one that had to be tackled holistically, as it involved related agencies such as Drainage and Irrigation Department and developers.

“There are many factors that contribute to flash floods, such as clogged drains, development projects and sudden increase in water volume because of non-stop rain.

“DBKL has identified the hotspots for flash floods but it is not solely our responsibility to solve the issue, ” he added.

Nor Hisham declined to reveal the exact amount received by DBKL from Budget 2020 but said it would be announced at a later date.

Precinct 11 Pr1ma Residents Association chairman Muzammil Arif Kamaruddin said he bought his first house through the affordable housing scheme and was happy that the Government continued to help everyone to own a home.

“Home financing is the biggest challenge for many who want to buy a house.

“The loan requirements are very strict, as such many fail to meet them although they have the means to make the monthly instalments.

“I am glad that with the various schemes being introduced, the dreams of many to own a home can be realised, ” he said.

“The contractors should be hired via an open tender to ensure there is no misuse of funds by the Joint Management Body or the Management Committee, ” he said.

He urged the Commissioner of Buildings (COB) to make more of an effort to ensure smooth collection of the maintenance fee.

Yee said the urban poor should be given consideration too.

“We can see better economic prosperity when the urban poor are able to save more when their cost of living is reduced, ” he said.

He said many of these lifts were in a poor state.

“The government needs to ensure that the budget can cover the maintenance costs of these lifts, which often run very high, ” he added.