EXPERTS in orchidology and botany are looking into planting more flora species at the Tengku Permaisuri Norashikin Orchid Conservatory in Fraser’s Hill as part of conservation and research efforts.

Prof Dr Rusea Go from Universiti Putra Malaysia, who led a group of 60 researchers in the first Royal Biodiversity Scientific expedition to Fraser’s Hill last month, said there were plans to build a dome-like cover over the existing site.

“Currently, a gardener is taking care of the place and watering the plants and I hope a dome-shaped conservatory like the Palm House in Kew Garden, United Kingdom can be built at the site.

“It can be self-sustaining once auto-watering machines are installed in the conservatory, ” Prof Rusea told StarMetro after the expedition.

“Ultimately, we hope to have all orchid species found in Fraser’s Hill to be planted in the covered conservatory alongside a variety of plants such as ginger, aroids and other herbaceous plants.

“Hopefully by year end, there will be something to show off to the public, ” she added.

The 195sqm conservatory is currently an open-air area where various orchids are planted.

Prof Rusea said Hulu Selangor District Council had allocated 1.74ha of land for a conservation park that would be open to the public.

“We are in the midst of drafting a proposal for the land to be made into a wild orchid conservation public park.

“The plants in the conservatory can be replanted in the park.

“We hope that will enable visitors to learn about conservation and once it is developed, it will be a key tourist attraction in the Selangor part of Fraser’s Hill, ” she said.

“The conservation park is a necessity to avoid people stealing the plants. Vandalism is rampant in Fraser’s Hill.

The recently concluded five-day scientific expedition in Fraser’s Hill aimed to evaluate the diversity of flora and their uses, especially orchids, ornamental plants and medicinal plants.

A total of 60 scientists and researchers gathered for the expedition on short notice to explore four major trails --- two long and two short trails.

The longest trail called the Ulu Semangkuk Trail has three peaks and spans about 2.9km as indicated on the map.

Other trails were the 1.9km Pine Tree trail that crisscrossed Selangor and Pahang borders, Mager Trail (0.3km) and the closed-to-public Pahlawan trail (0.7km) that has deep ravines.

Prof Rusea said there were encouraging findings and new insights into the diversity of plants uncovered during the expedition in Fraser’s Hill.

“The orchid group, led by Dr Farah Alia Nordin and myself, discovered a total of 134 species within the four trails we explored, despite us not completing the Ulu Semangkuk trail due to rain.“We also discovered a new record, Liparis geophylla (widelip orchids or sphinx orchids) as it was flowering, ” she said.

(New record refers to a flower being found for the first time at a site).

“This species was said to be only found in Sumatra. Five years ago, I spotted it in Gunung Jerai, Kedah.

“We anticipated that the Liparis orchid was already growing in Fraser’s Hill but only that it was not spotted earlier.

“The flower in the vegetative state looks like ginger, so if it does not flower, it would be difficult to be identified as an orchid, ” Prof Rusea explained.

Fraser’s Hill is a tourist attraction that sits between the borders of Pahang and Selangor.

So far, 952 original floral species have been recorded in Fraser’s Hill, which covers 10% of the entire flora composition in peninsular Malaysia.

As for orchids, there are about 1,000 species and 146 orchid genres in peninsular Malaysia.

According to Prof Rusea, the team had identified at least 500 species of flowering plants during the expedition, excluding trees.

“Based on the 500 species from 15,000 flowering plants in Malaysia, the concentration of the plants is very high in Fraser’s Hill which is a rich floristic area.

“The diversity is high in the four trails we covered and not all the plants there were collected.

“This is because it is a virgin jungle where trees are huge and the canopy is dense.

“Mountain forest is known to have a high diversity in flora and there are a lot of endemic species in Fraser’s Hill, which makes it unique, ” said the botanist, adding that the area was still intact due to less development in the surroundings.

The preliminary findings of the expedition are expected to be deliberated in a seminar by the end of the year and published in a special issue of Malayan Nature Journal.

Prof Rusea said that in 1911, a research team collected a species of orchid called Macropodantus alatus (Winged Macropodanthus) in Fraser’s Hill but it was never collected again at the hill or any other parts of Malaysia.

“However, I spotted the plant once in Fraser’s Hill although it was thought to be extinct in the wild.

“Two years ago, it was spotted again in Terengganu.

“The orchids were there, just that nobody did a comprehensive study to locate them, ” she said.

It is the same case for Vanilla norashikiniana.

Prof Rusea said she first found it along the Ulu Semangkuk trail in 2011.

“When I revisited in 2014 to collect more samples, the plant was no longer there and I suspect that people might have ripped them out, ” she said.

“Some irresponsible people would pluck the orchids while they were still flowering, but it might have been the last of its species left, ” she said, adding that it was important for researchers to create greater awareness in preserving rare orchid species.

To deter destruction of rare orchid species in the country, Prof Rusea said there should be more community-driven conservation efforts.

“All the dos and don’ts have been written in the regulations by Forestry Department and when you are in a forest reserve, you are not allowed to take anything out.

“Yet people still do it. We need strict enforcement not only by Forestry Department but also by the local community.

“Once we get the local community involved, they will create greater awareness and become the eyes and ears of forest conservation authorities.

“If the community is made aware of the rare orchids in Fraser’s Hill, they will surely not allow people to take anything from the forest, ” she noted.

Citing an example, Prof Rusea said there was an area in Colombia where most of the villagers’ income was derived from the forest produce surrounding their villages.

“This community decided to take care of the forest and they carried out replanting in their forest.

“They also do not allow outsiders to collect any plants or produce from their forest. Visitors’ belongings will be checked when they exit the forest.

“We can emulate what they have done in Colombia, but sad to say, a lot of Malaysians don’t feel compelled to do their part to preserve the flora and fauna in our forests, ” she added.

Currently, Prof Rusea is involved in formulating the policy to include community conservation with representatives from Costa Rica, Colombia, Ecuador and Nepal which had already been submitted for publication.

Each representative gave scenarios in their respective countries on how conservation was implemented in order to retain all the species sustainable in the forest.

As for tourism, Prof Rusea said an elevated boardwalk should be built to prevent visitors from trampling on the plants.

“Certain trails should also have limited access to tourists while only certain parties should be allowed to enter trails which have rare flora species, ” she added. 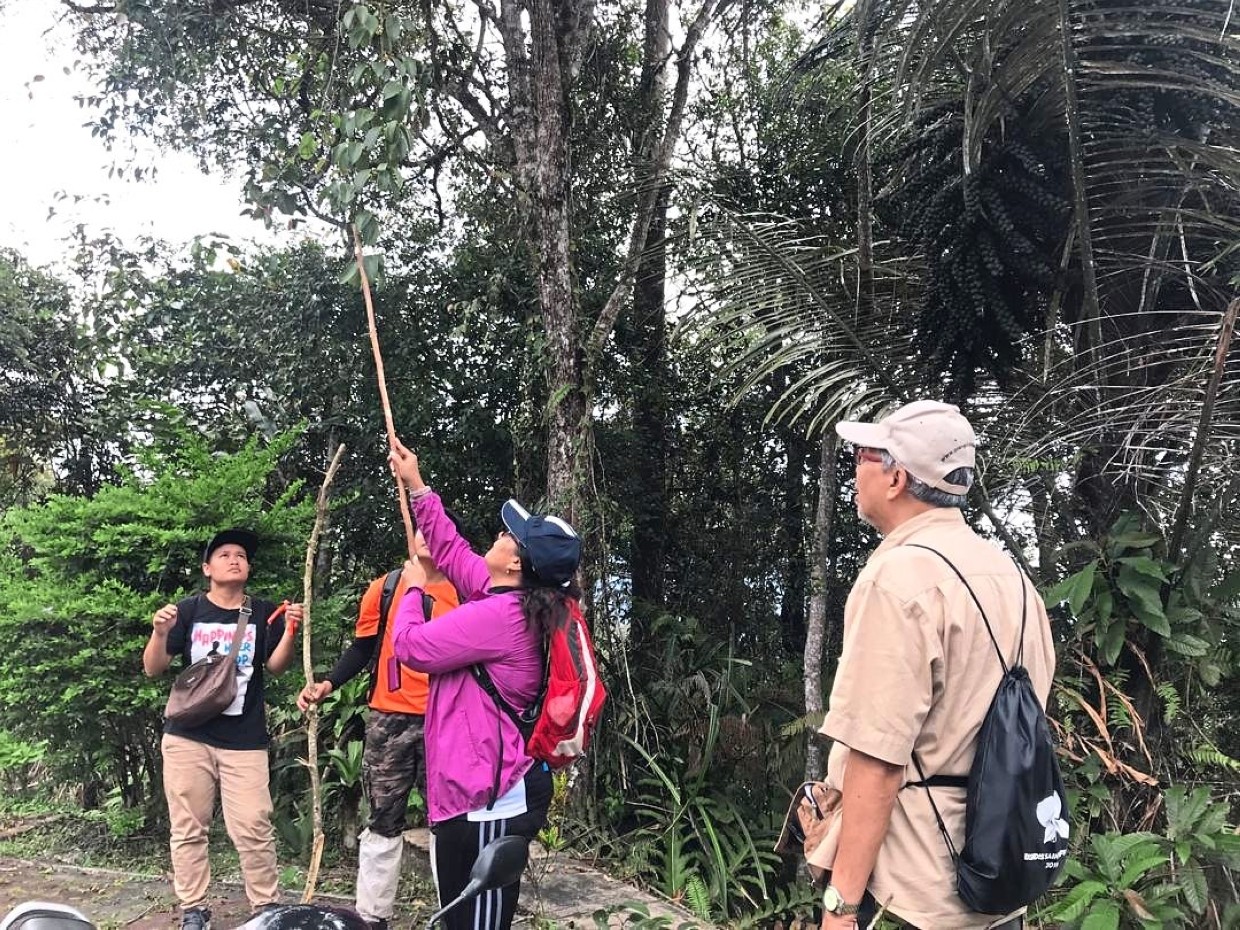 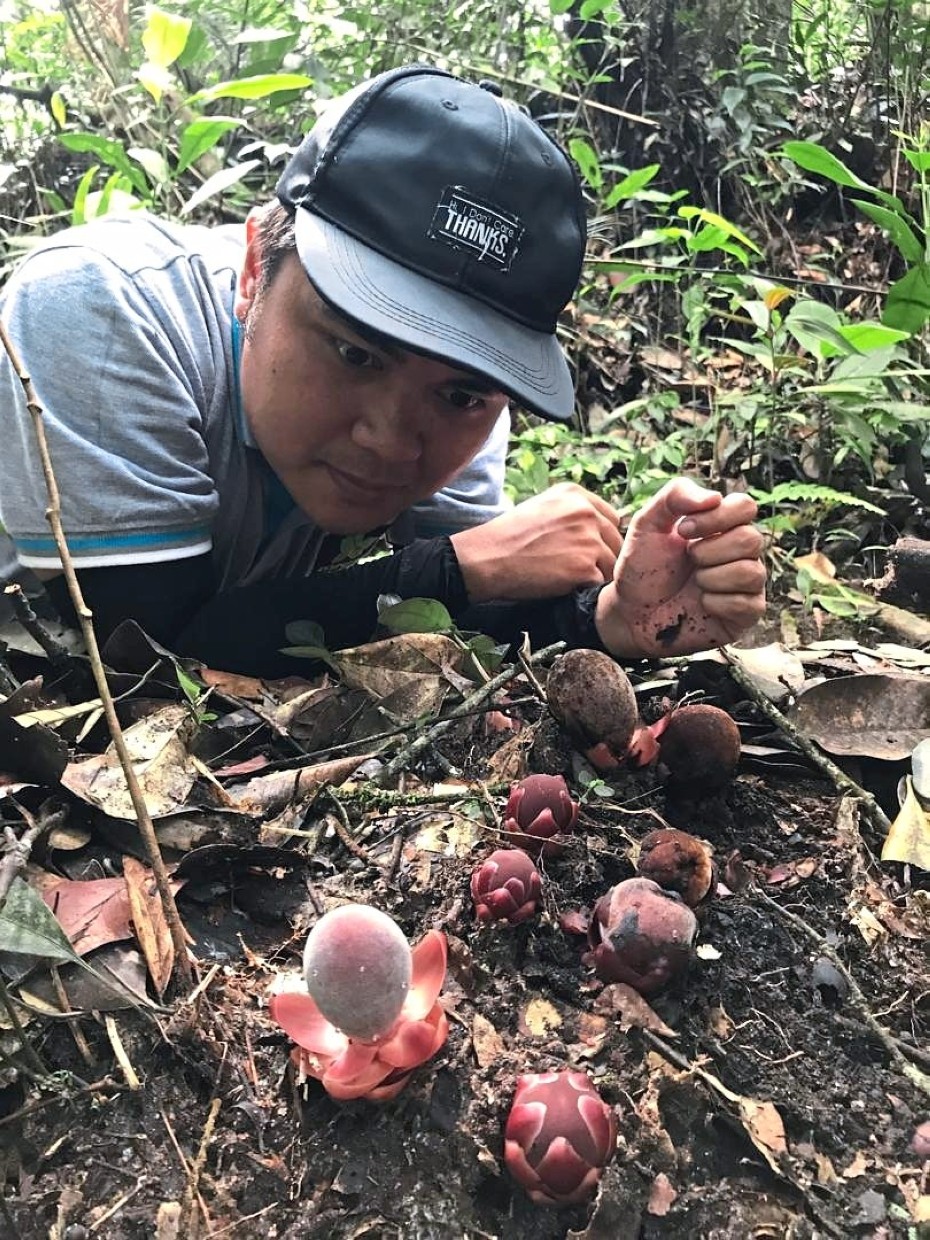 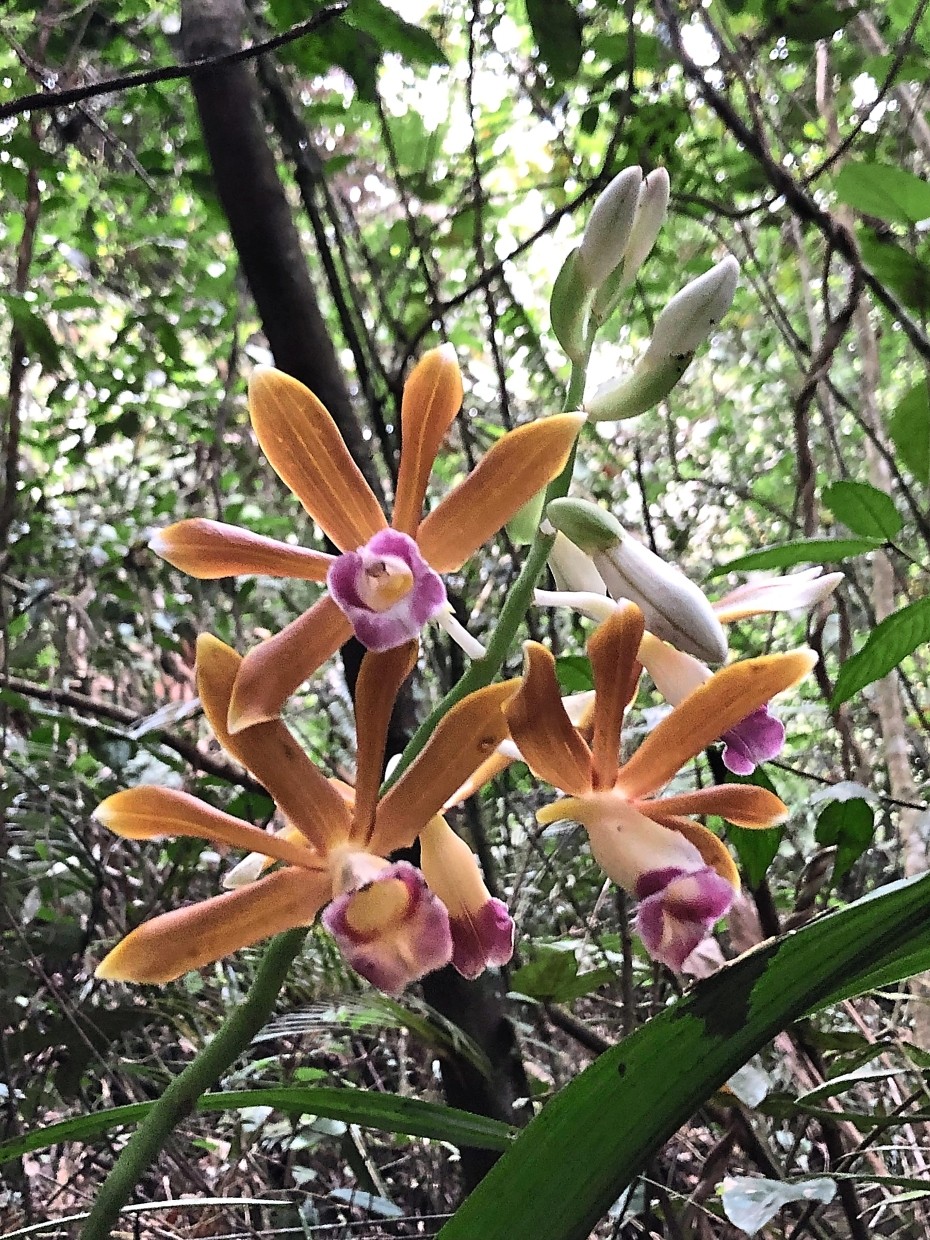 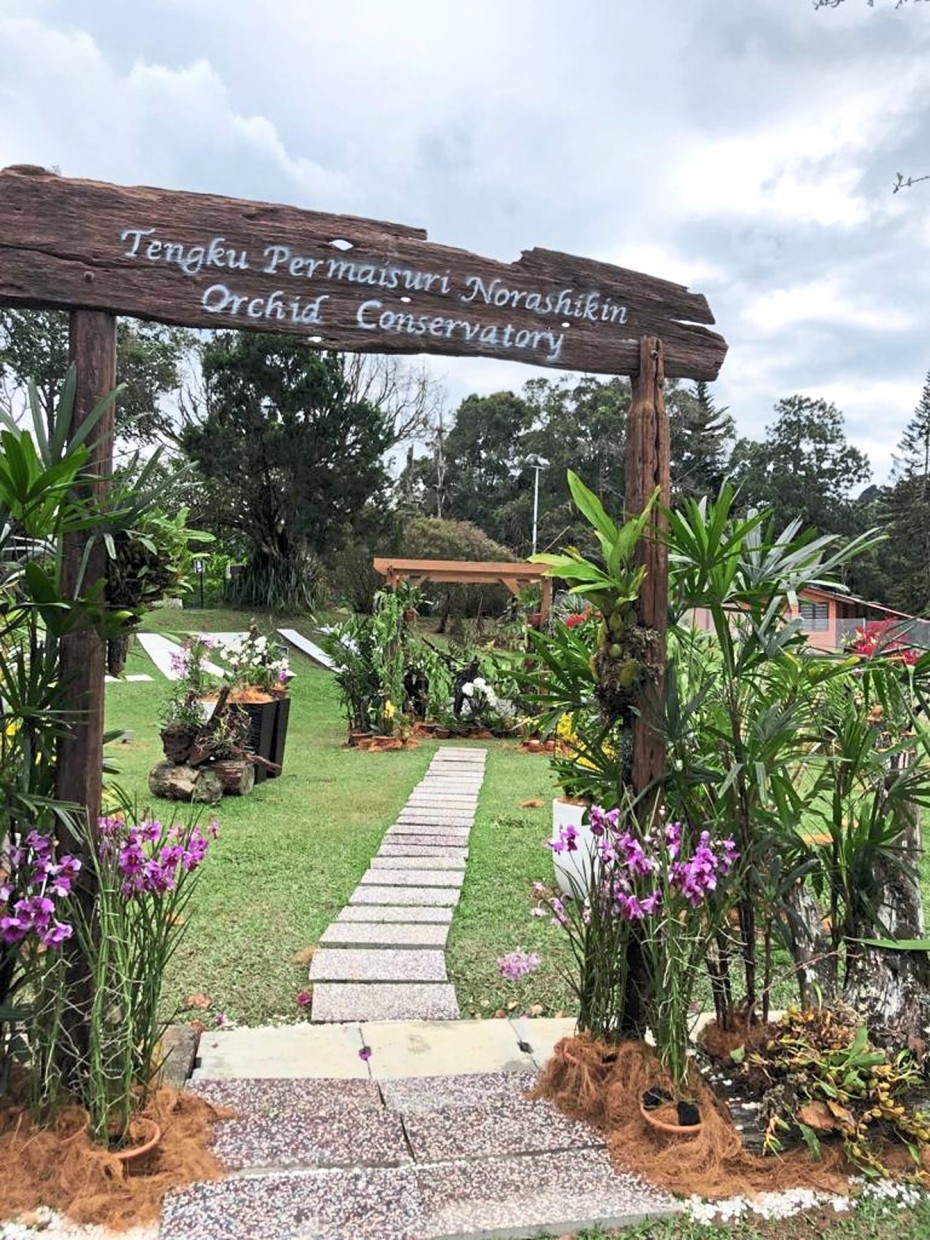 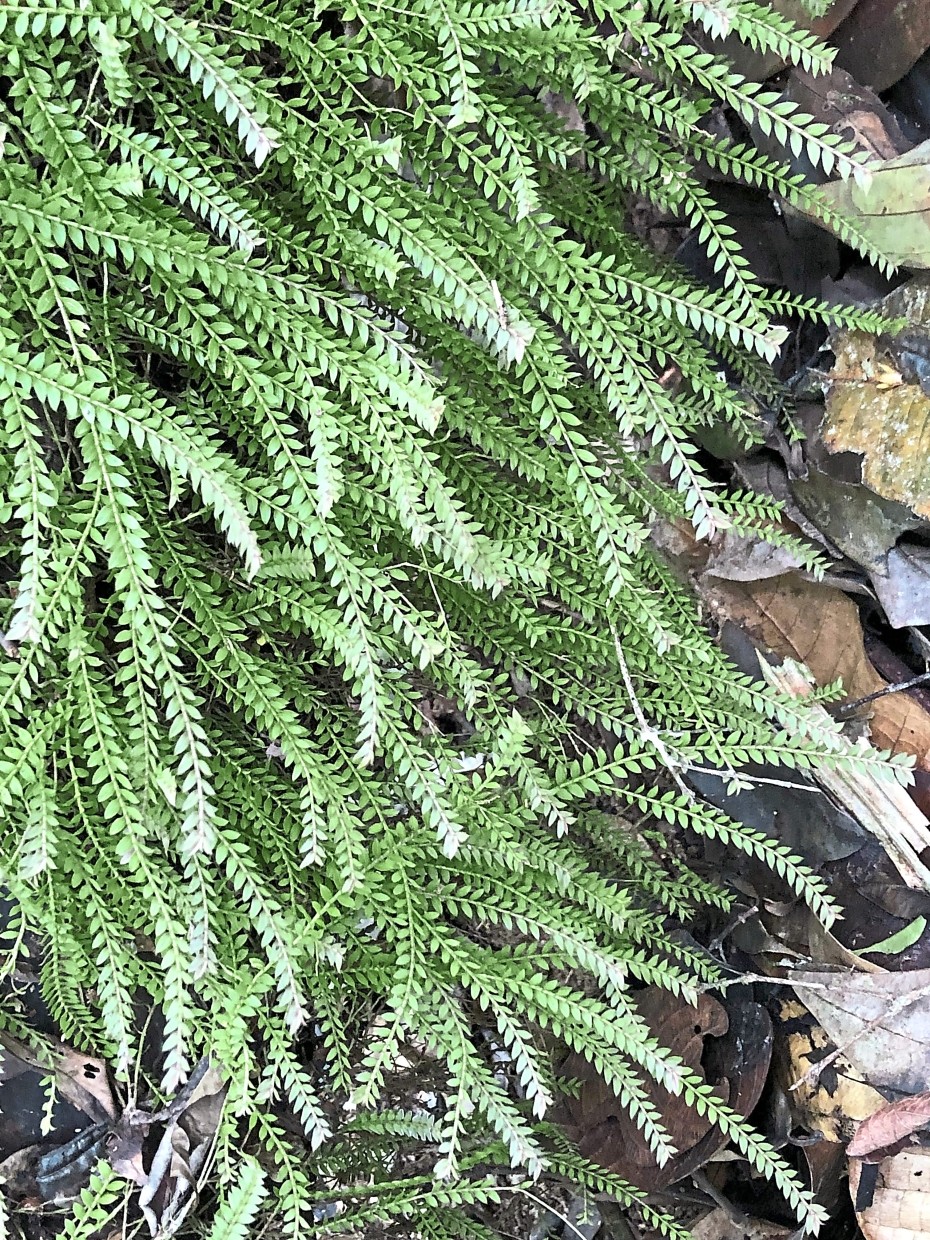 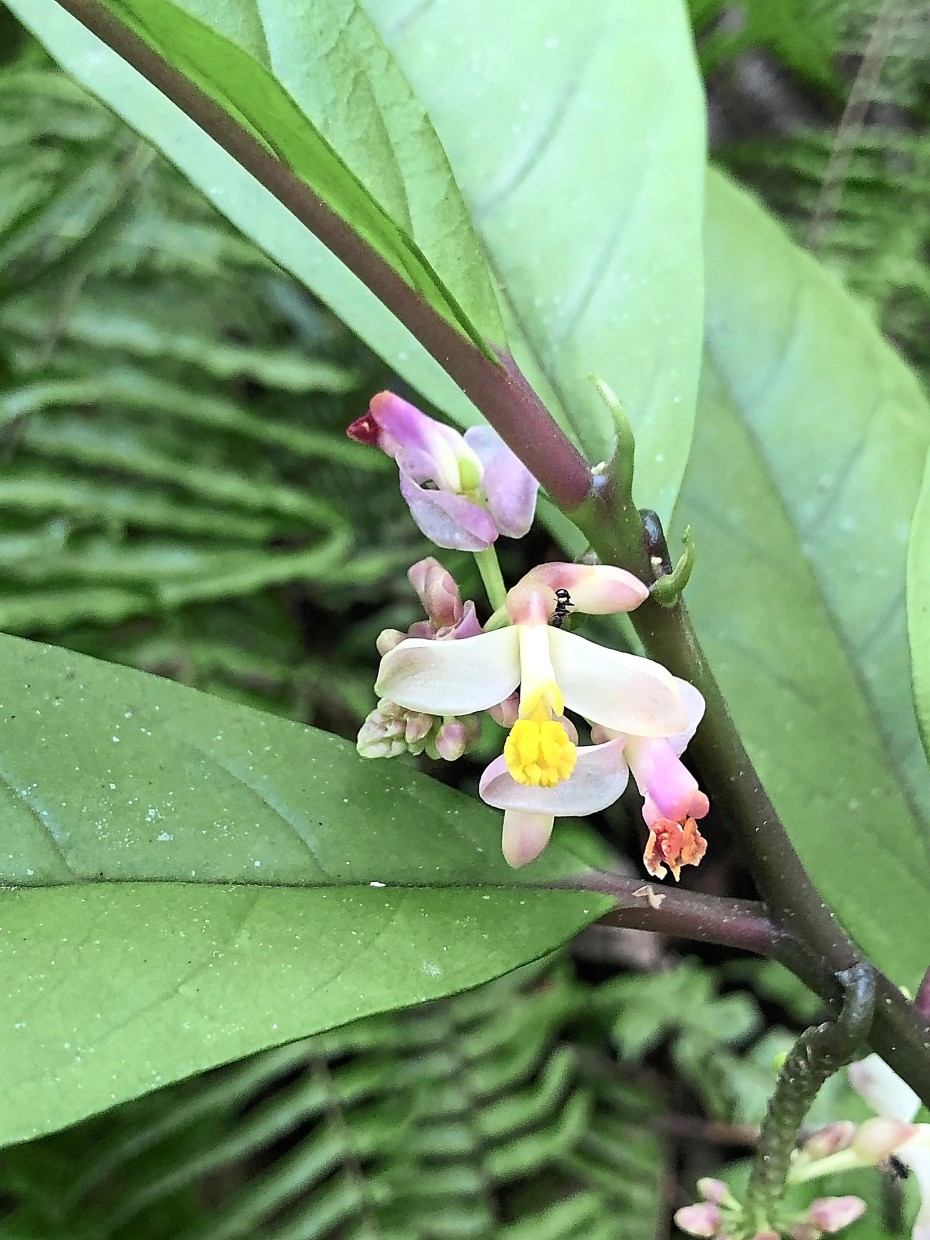 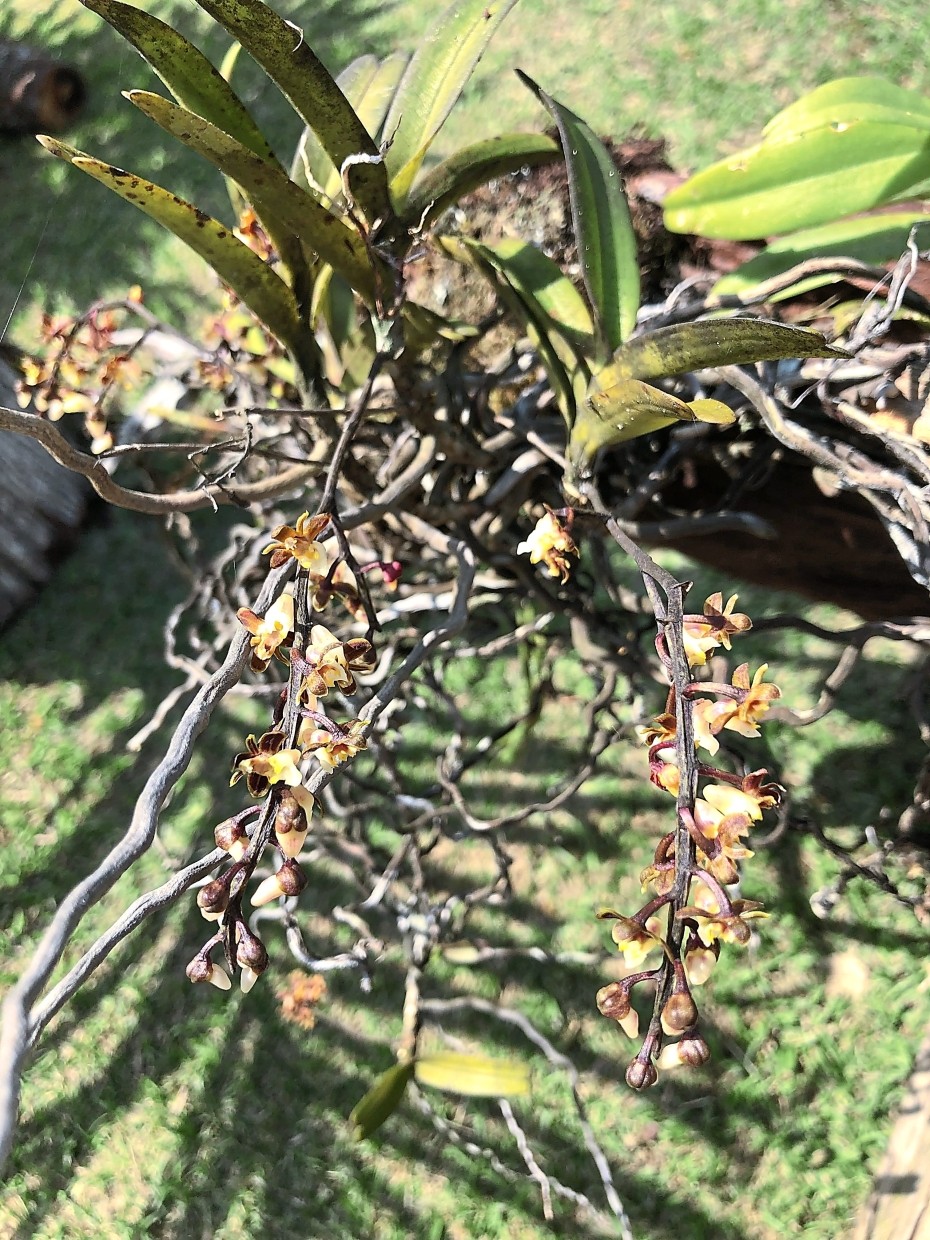 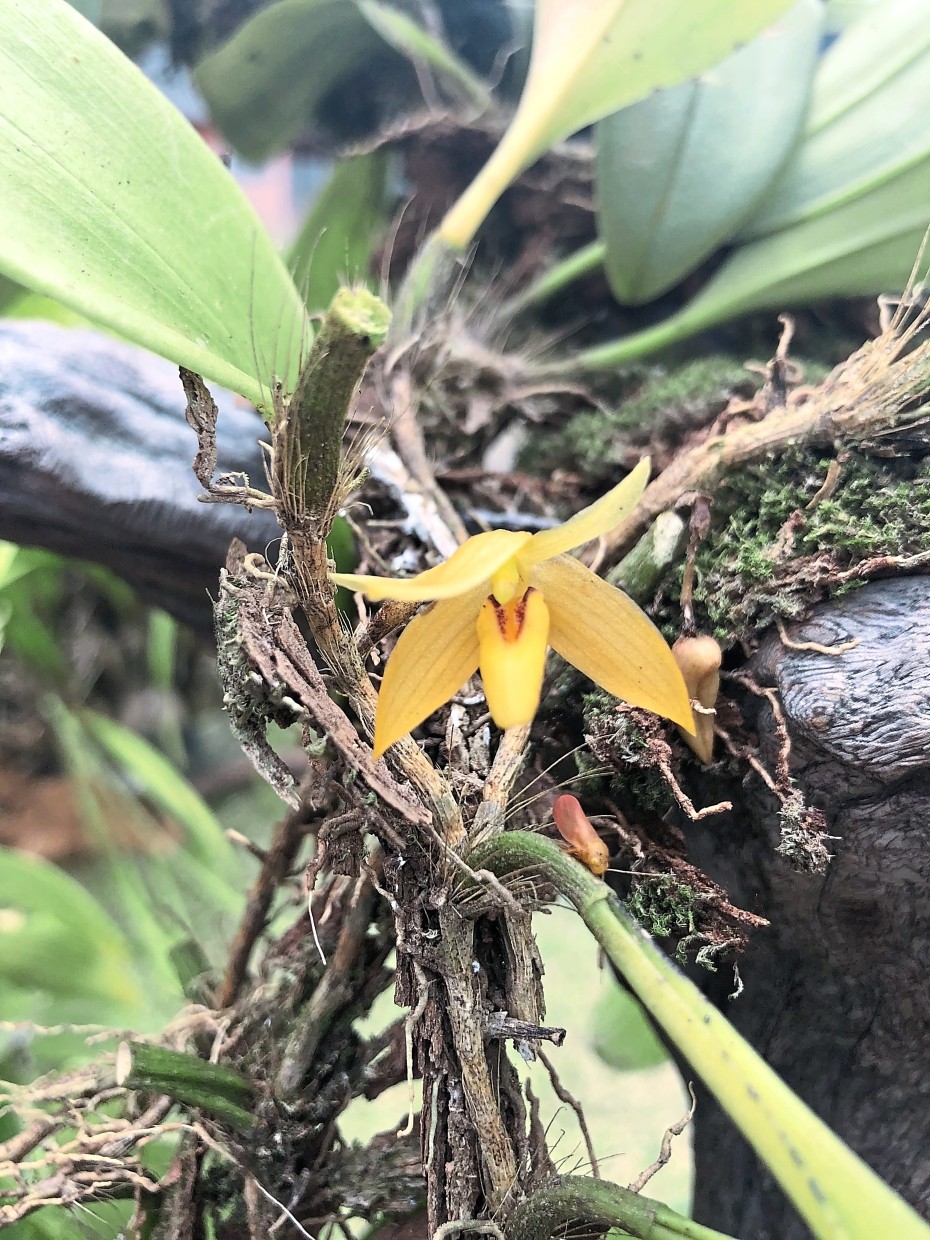 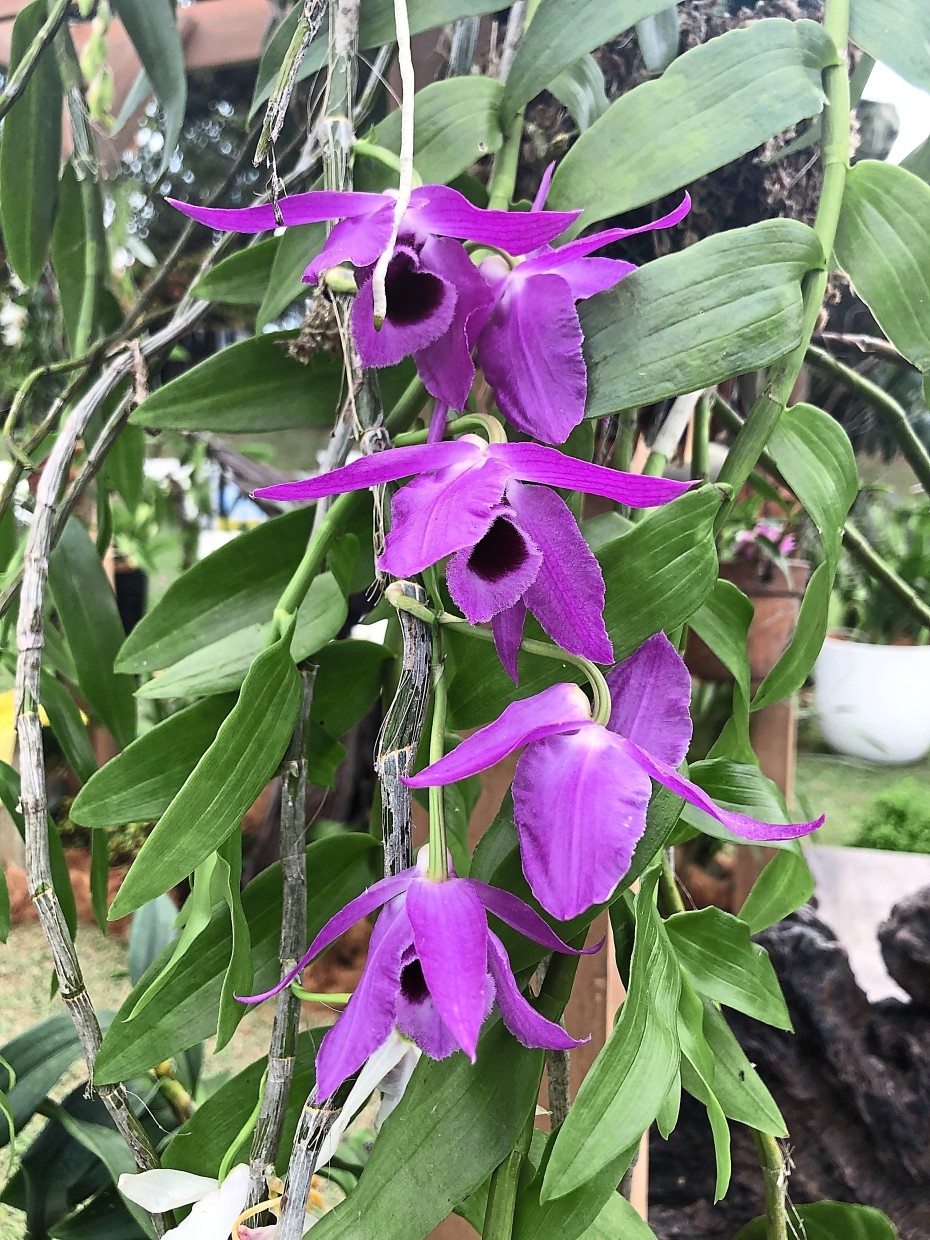 Prof Rusea (in pink) and her team trying to get a plant sample during the biodiversity expedition in Fraser’s Hill.

The Orchid Conservatory is designed to preserve some of the rare orchid species.

Prof Rusea (in purple) and her group taking a break during the expedition in Fraser’s Hill.

Podochilus microphyllus is an orchid species growing in the highlands.

Cleisostoma subulatum is a orchid species found in tropical rainforest.

Alphinia sp are commonly found in hill or montane forest.