KAMPUNG Baru in the heart of Kuala Lumpur is the last bastion against the onslaught of infrastructural modernisation that is sweeping through the capital city.

Years of standing in the sidelines of development has resulted in the area suffering from rubbish pollution, traffic strain, clogged drains and influx of foreigners.

Attempts to take over the land for redevelopment were rebuffed, the latest being a plan by the Federal Territories Ministry to buy lots at RM850 per sq ft.

On Sept 22, The Star reported that the ministry was offering landowners four options as compensation — cash, house at the new project (at the site), a combination of cash and house, or become a shareholder of the new project.

He said about 90% of them agreed with the offer price.

Khalid added that the rate offered by the government was based on the valuation determined by the Valuation and Property Services Department.

“Kampung Baru is open to anyone. Anyone can make an offer, not only the ministry or government. Anyone who feels the land price of RM2,000 per sq ft is affordable and can buy, nobody will stop it,” he said in the interview.

However, StarMetro, when speaking to Kampung Baru residents found a number of them to be divided over the plan.

They raised concerns of land ownership and that many family members would have to share the profits or agree to sell.

Retiree Zulkifli Zaid Yazid, 56, said his seven siblings and he shared ownership of their family land.

The matter could not be resolved as some of them were keen to sell while others preferred remaining on their land.

“If we cannot get everyone onboard, we will not be able to sell it off.

“Some of us are also worried that if the land is sold, the Malays will be displaced from the city.

“Even now, some areas in Kampung Baru are occupied by foreigners. Some of the landowners have built premises and rented them out to foreigners to do business,” he said.

Zulkifli, however, believed that the government would eventually succeed in buying the plots of land.

“They have the power and money. If they are persistent enough, the landowners will eventually relent and sell off their land,” he said.

Badrul Hisham Mohd, 43, whose family owned land in Jalan Hamzah, said although the price offered by the government was relatively high, the money received would be a small sum after the amount was divided among family members.

“Our family land measures about 4,000sq ft which means we will receive about RM3.4mil in total.

“After dividing the amount among us, we will get very little. I doubt that we can even afford low-cost housing.

“We are holding out of the negotiation with hopes that the government will give way and raise the price,” added Badrul.

He, however, saw the redevelopment plan as a positive move.

“I have lived here for decades and I have seen little development here.

“Social ills such as drug addiction has become a problem,” Badrul said.

Parking attendant Muhd Ahmad Asyraf said his family was unable to come to an agreement about the land sale.

“My mother agreed to sell but my uncle was reluctant. My grandfather, who is still alive, is still undecided,” he said.

Meanwhile, cempedak goreng seller Ramlan Latif, 56, welcomed the redevelopment plan and had no qualms about the price.

“The price offered is much higher compared to that offered about eight years ago — which was only RM300 per sq ft.

“Some of us are already old and we just want to cash in on the land value and see this area being developed.

“We only hope the government will pay us a lump sum amount, but a higher price will be good,” he said, adding that a majority of residents would opt for cash.

A check by StarMetro in the area showed that many of the houses were still wooden, while some were arranged very closely together, posing a fire risk.

Illegal roadside stalls were also abundant, while double-parking was a common occurrence.

Khalid earlier said the redevelopment plan, if it went ahead, would see 45,000 units of affordable houses being built at the site, which would cover 70% of the development area.

Another 30% would be allocated for commercial purposes.

Grocer Shah Izham Mohd said he was worried that his income would be disrupted if the area was acquired for development.

“This grocery shop is my livelihood. If the area is acquired for redevelopment, I will have to find another place to do business and that is not easy,” he said.

Iradah Said, 57, a permanent resident (PR) from Indonesia who is renting a unit in the area, said the landowner was adamant to keep the land.

“Many foreigners are renting a unit and the rent we pay is the landowners’ main source of income.

“If they sell the land, landowners will no longer be able to collect rent and that will kill their source of income,” said Iradah who has lived in Kampung Baru for 11 years.

“If the government acquires all the land here, I will return to Indonesia,” she said.

Iradah said her rent was RM200 a month.

Another PR, Abdul Majid Amin, 62, from Acheh, Indonesia who operates a grocery shop, said his landlord advised him to start looking for a new place as he would be selling off his property. 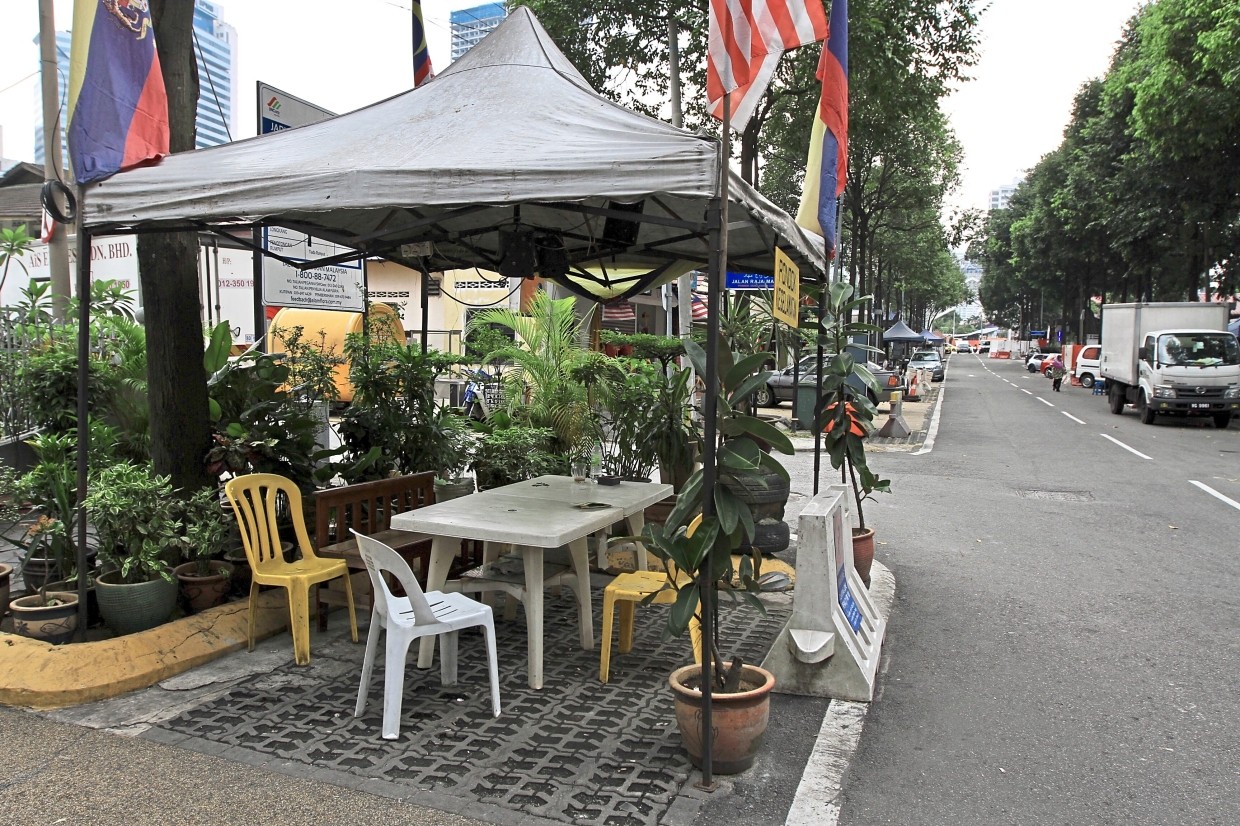 Traffic congestion in Jalan Raja Mahadi is made worse by double-parking, a common occurrence in Kampung Baru.

Children playing on a narrow and congested street in Kampung Baru.

Illegal stalls along Jalan Raja Mahadi in Kampung Baru, Kuala Lumpur in open defiance of the prohibitive sign next to them.

As if frozen in time, many houses in Kampung Baru are still wooden, and arranged very closely to each other, posing a fire risk.

Roadside stalls are a common sight in Kampung Baru.