The view from the 124th floor of the Burj Khalifa shows the beauty of Dubai.

VISITING cities in the Middle East was never in my bucket list of travel destinations. Don’t get me wrong but I blame this on my lack of research and unfounded preconceived ideas of these destinations.

My trip to the United Arab Emirates (UAE), however, has changed my perception.

In the UAE, modern cities such as Dubai and Abu Dhabi are bustling, with skyscrapers and developments dotting the landscape and yet they appeal as tourist attractions.

These cities have a lot to offer to first-time tourists like me. The outdoor experience with nature, the cultural and shopping aspects of these cities provided me with an all-rounded, enriching travel encounter.

My trip was made more memorable, on a personal note, as I was among several journalists from Malaysia who traveled to the city of Sharjah on the inaugural Air Arabia flight from Kuala Lumpur.

The media team’s tour was sponsored by Oscar Holidays Sdn Bhd and we were taken to several places of interest.

UAE has seven cities and Sharjah, located on the Arabian Gulf, is among them.

All of the seven cities, including Dubai and Abu Dhabi, can be easily accessed from Sharjah by public land transportation.

Among the most memorable outdoor adventure for me while in Dubai was the evening Desert Safari tour.

This is a must if you only have a night to spend in the city.

The dune drive was nerve-wracking and it is certainly not for the faint-hearted.

My peers and I, from the media, had no clue what was in store for us when we boarded the 4x4 white land cruisers. We were told to put on the seat belts and were transported to the desert by experienced drivers.

Our dune ride adventure began once we arrived in the desert. The dune drive was like a “roller coaster ride” over the desert sand in a four-wheel vehicle.

It was unfortunate for one of the reporters, who experienced motion sickness after 15 minutes into the ride. Nevertheless, the rest of us found it a thrilling experience.

But the best reward came after the ride.

There we were standing in the middle of the desert, over the sand dunes, soaking in the stunning landscape.

The rays of the sunset over the landscape accentuated the colour of the sand which was in shades of copper and gold.

No doubt the desert was barren, yet, the sand dunes looked like tall sea waves.

I felt like I was standing in a sea of copper and gold grains.

This to me was the most magical experience in Dubai.

After the dune ride, I hopped onto a camel and enjoyed a short ride in the desert.

It was slightly challenging to climb on the camel but I got some tips on how to do it properly. The ride itself was fun as I experienced this ancient mode of transportation.Later that evening, we were treated to a local barbecue dinner and appreciated the cultural entertainment showcased at the Al Jabal Village.

The city of Dubai is a stark contrast to the desert. It houses numerous modern skyscrapers, including the Burj Khalifa – the world’s tallest tower since 2010.

The tower spreads over ui280,000sq m of mixed-use floor space with the highest tip at 829.8m from ground level.

The observatory tower allows visitors great photo opportunities of the city’s modern landscape. Unlike most other observatory towers in the world, visitors here have more room to manoeuvre and perfect their Instagram-worthy shots.

I am not a shopaholic but I gave in to temptation and purchased some unique Middle Eastern perfumes here.

My visit to the Sheikh Zayed Grand Mosque in Abu Dhabi etched another unforgettable memory for me.

The walls, flooring and pillars are mostly made of the world’s finest marble and ceramic. The base colour of this architecture marvel is ivory-white and it looks just as stunning in comparison to the Taj Mahal in India.

We were informed by our tour guides that the carpet at the mosque’s main prayer hall was weaved by about 200 Iranian weavers on-site for two years.

The carpet has floral designs and as for the chandeliers, they were in bright hues such as red and green.

What makes the architecture even more special were the details in the design.

The floral designs on the pillars, walls, ceiling and flooring added colour and vibrancy to the ivory-white mosque.

In any of the UAE cities, tourists are free to dress modestly and there is no dress code imposed. Female visitors do not have to adorn the headscarf or wear Muslimah clothing.

However, just like any places of worship, tourists must follow a strict dress code when visiting mosques.

As the weather in the UAE cities are warm all year round, and without rain, more activities are carried out indoors.

There are numerous world-class indoor amusement parks such as the Ferrari World Abu Dhabi, Warner Bros Abu Dhabi and IMG Worlds of Adventure in Dubai.

In present times, Dubai is fascinating for its modern architecture. The oldest existing building here is the Al Fahidi Fort built in 1787.

This building now houses the Dubai Museum. Being a fan of museums, the visit was worthwhile. It was interesting to learn how life was for the locals before the discovery of oil in this part of the world.

Cruise dinners are also popular among the tourists to these cities. The media group I was with experienced the Al Wasl Dhow dinner buffet cruise in Dubai. Diners can head to the open decks to enjoy the city’s view after their dinner.

Also present during the tour was Oscar Holidays Sdn Bhd director of operations Datuk A. Chandrakumanan. He described Dubai as a city of luxury.

“When people talk about Dubai, the heat comes to mind. No doubt it is warm but the public can enjoy unique experiences such as the desert safari ride. This will certainly provide visitors from Malaysia a memorable experience as they can’t get this elsewhere.

“The river cruise at Marina Bay is fun too. Dubai is known as a luxurious city and places such as Burj Khalifa and Dubai Mall showcases among the world’s best architecture as well as shopping experiences.

“These cities are modern and they even have places of worship such as churches and temples. In case tourists have religious obligations to observe during their trip, they can head to their respective places of worship, ” he said.

As for the Air Arabia low-cost carrier, it comes with generous leg space which made flying comfortable.

The direct flight from Kuala Lumpur International Airport (KLIA) to Sharjah comes with free in-flight entertainment comprising music, talk shows and movies. This certainly took away our boredom from the seven-hour, direct-flight journey.

If you are a Bollywood junkie, there is a list of entertainment to keep you tuned in and lose track of the travelling time. Just bring along your mobile devices as well as headphones and you are all set for pleasant air travel.

Air Arabia Malaysia director Andy Sengiah said now with the direct flight from KLIA to Sharjah, return passengers could save up to 40% in airfare.

“Previously, other flight carriers would price their tickets at over RM3,000.

“With our low-cost carrier, we have no business class seats so this gives an opportunity for Malaysians and those from the Middle Eastern countries to visit with value-for-money flight fare, ” he said. 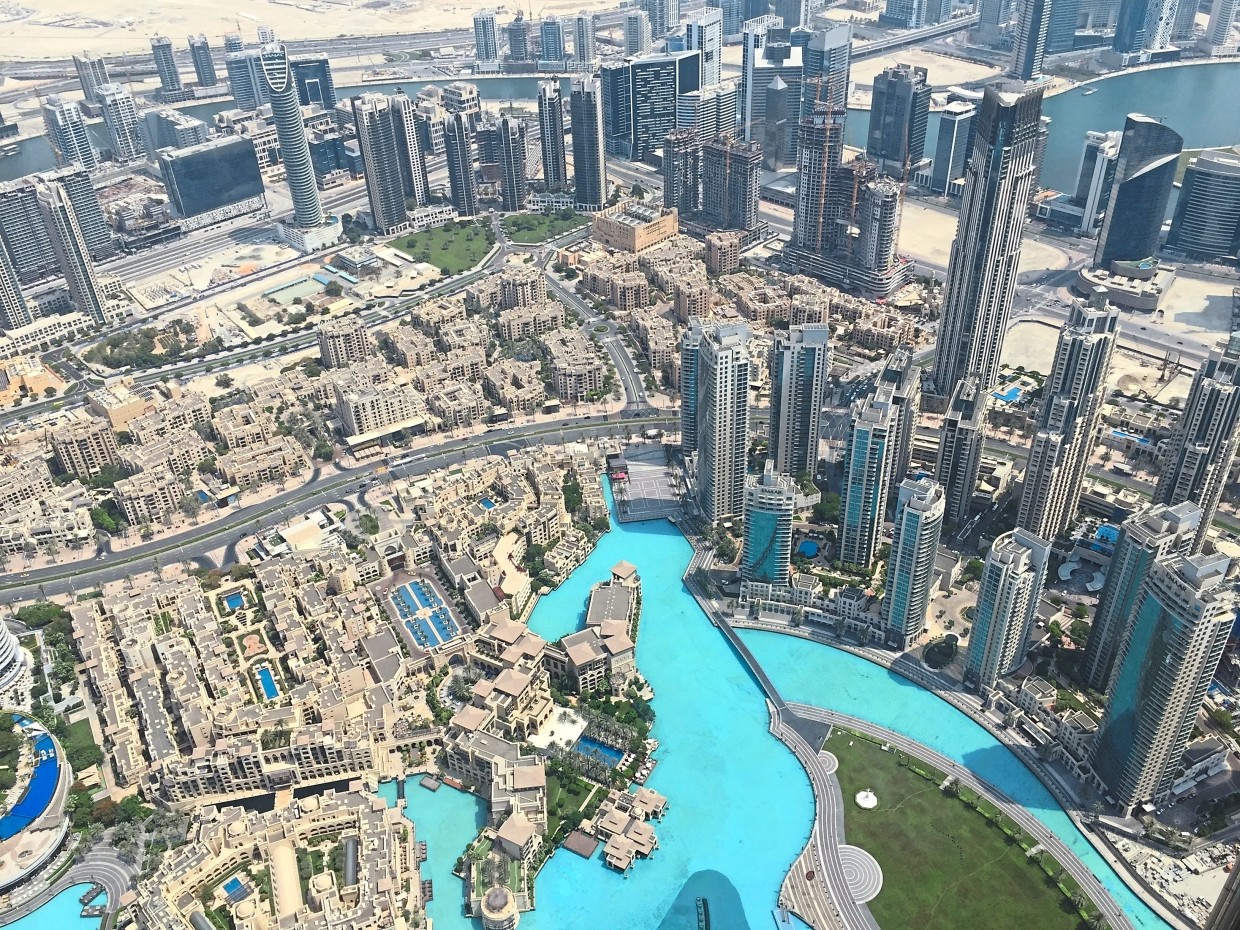 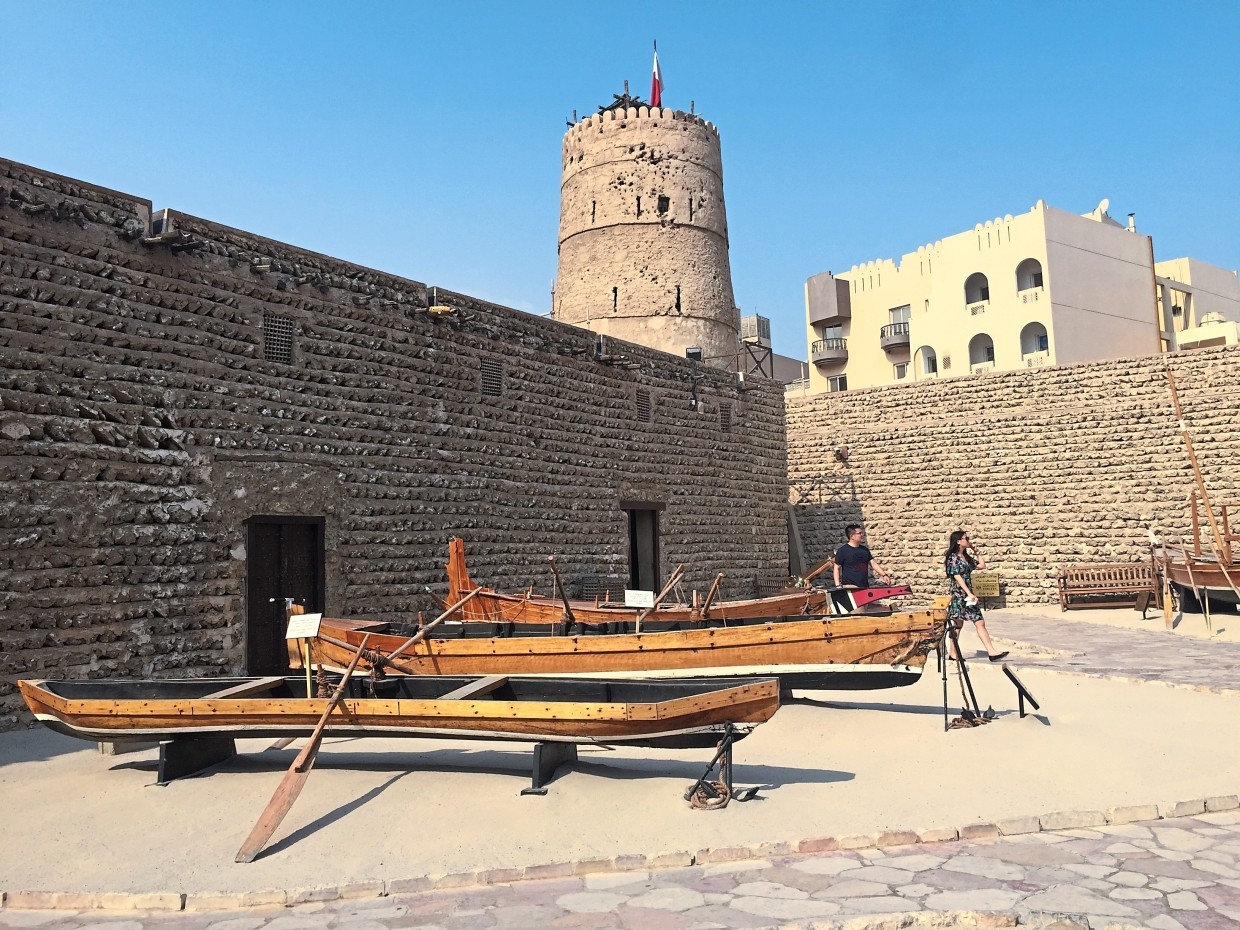 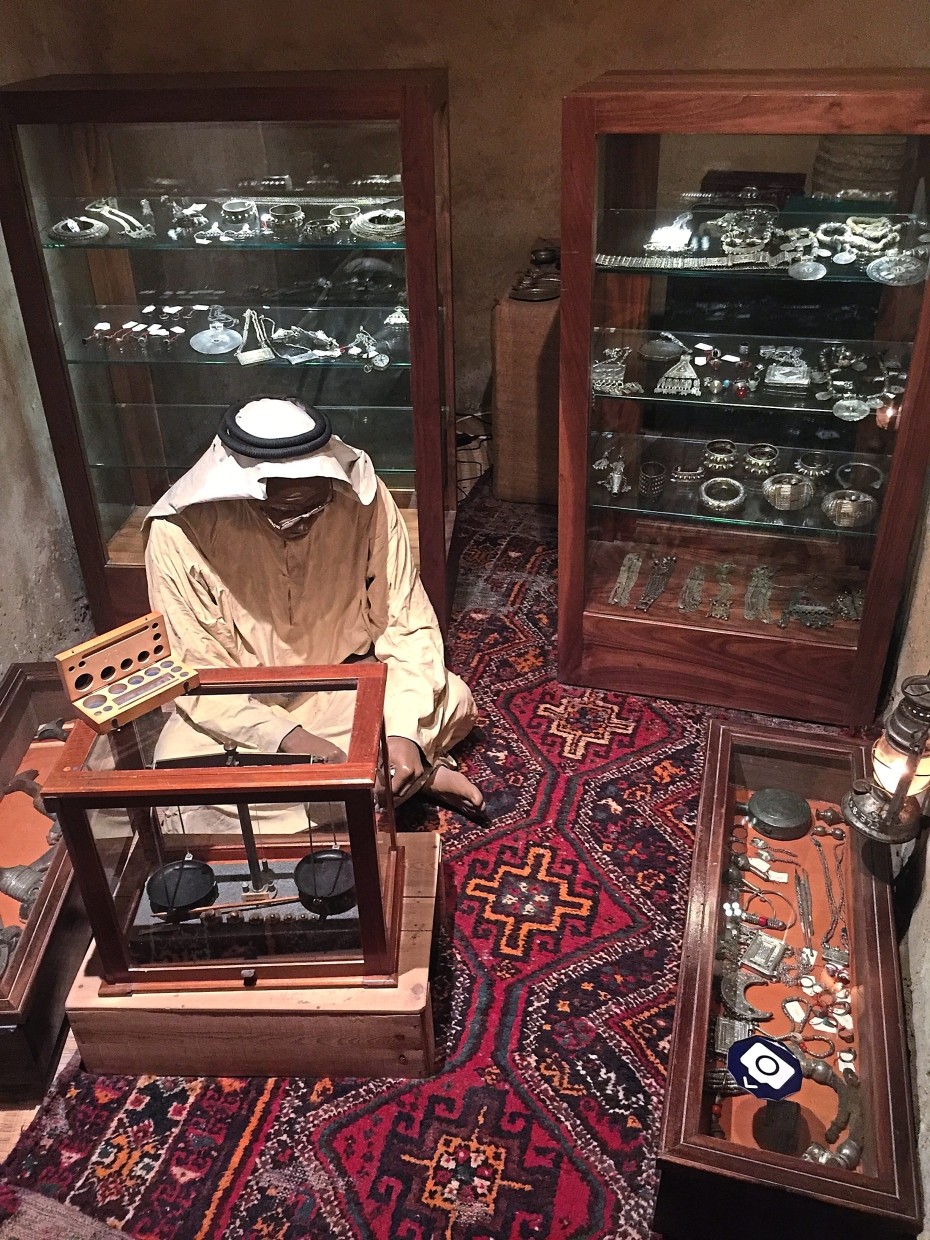 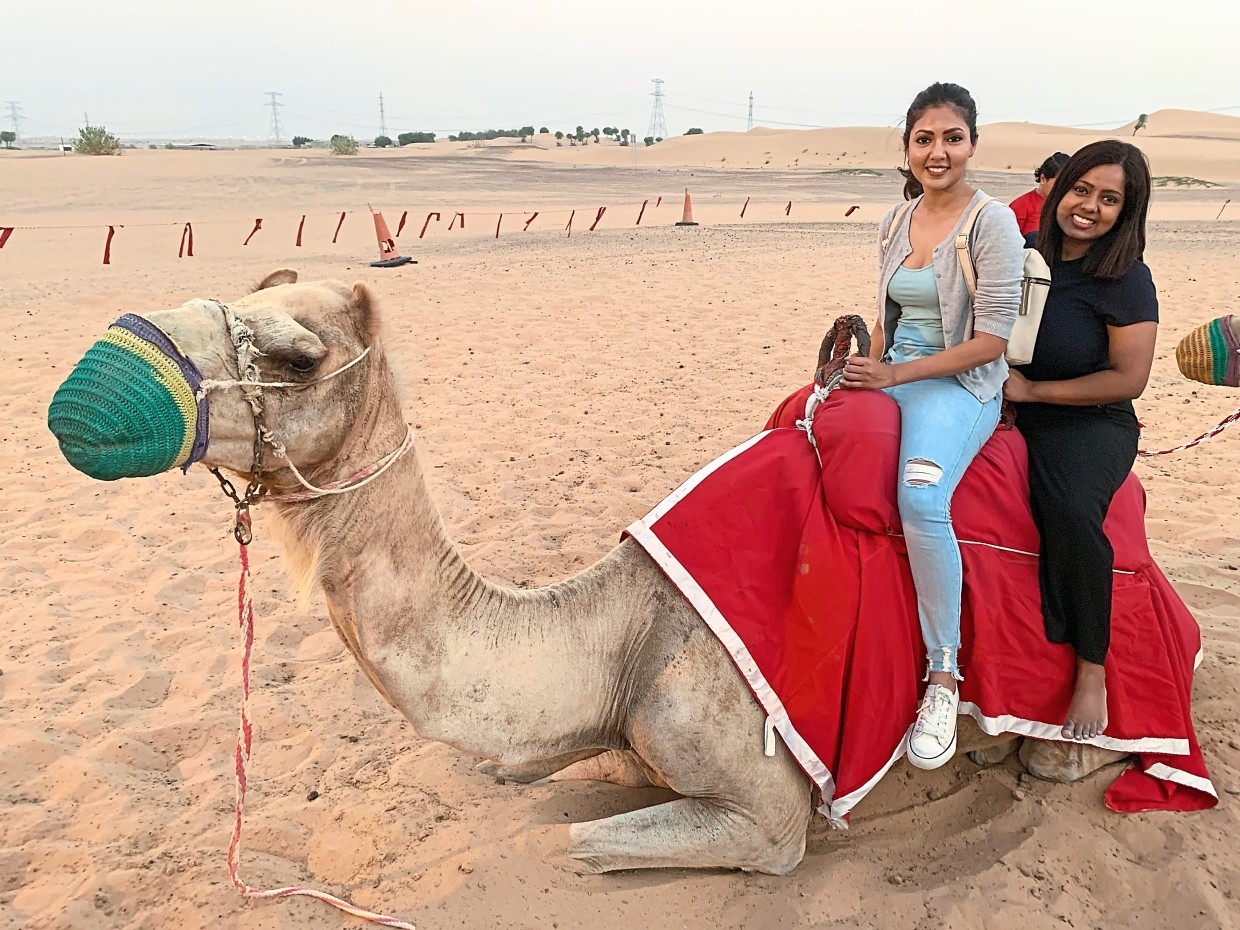 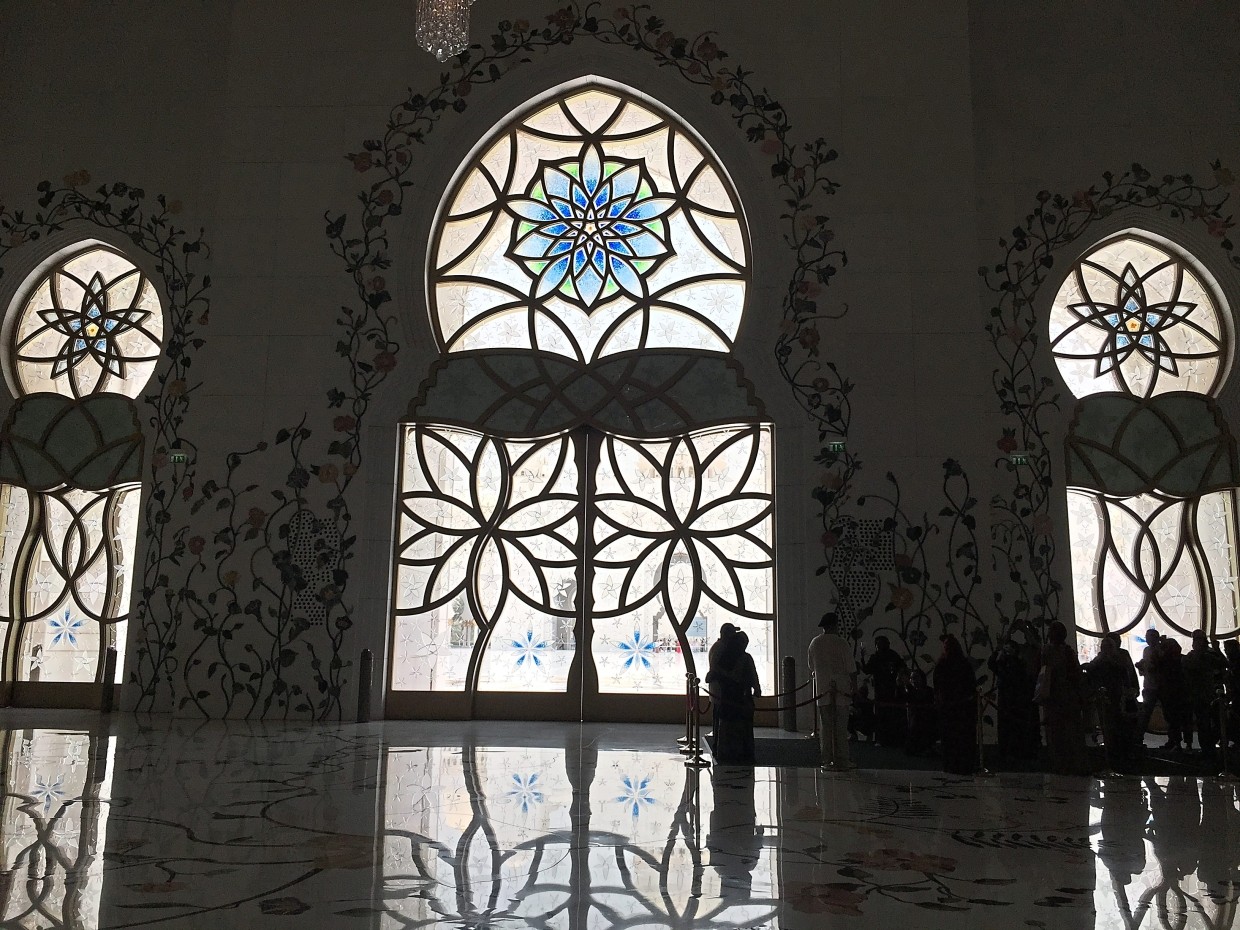 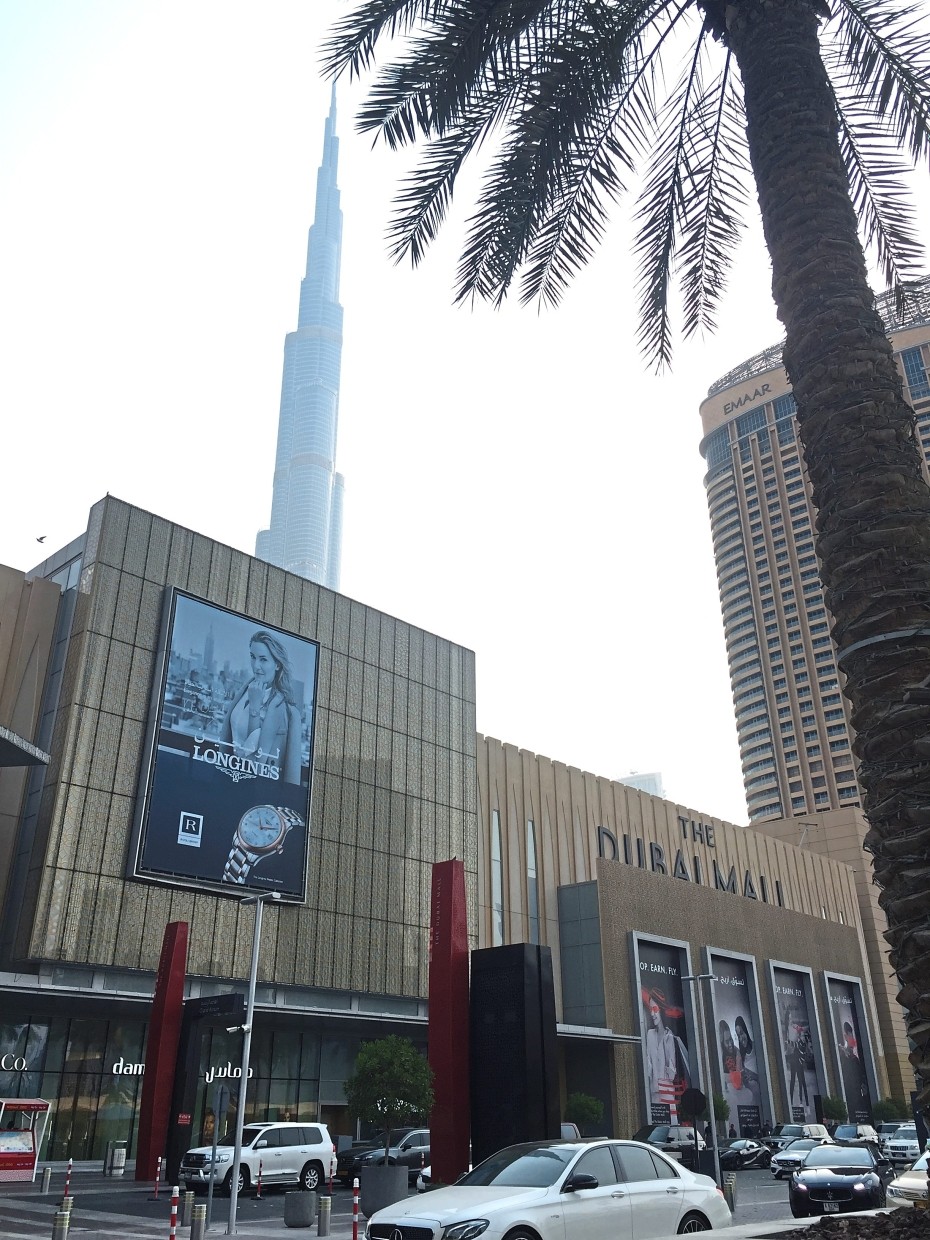 The view from the 124th floor of the Burj Khalifa shows the beauty of Dubai.

The oldest building in Dubai is Al Fahidi Fort, built in 1787. This building now houses the Dubai Museum. A display of the ancient mode of transportation used for fishing is at the entrance to the museum.

A mannequin display of a traditional goldsmith in the olden days at the Dubai Museum.

A display of a herb and spice shop at the Dubai Museum.

Visitors can hop on a camel to experience this ancient mode of transportation.

The Sheikh Zayed Grand Mosque in Abu Dhabi's walls, flooring and pillars are mostly made of the world’s finest marble and ceramic. The base colour of this architecture is ivory white and it looks as stunning or even better as compared to the Taj Mahal in India.

Burj Khalifa (in the background), the world’s tallest tower, is connected to Dubai Mall which has over 1,200 stores spread across 502,000sq m.