Taking the art of mermaiding seriously

Freediving and mermaid instructor Wang (centre) with (from left) Ng, Lu, Acacia and Tan waving the Malaysian flag at the World Mermaid Championship in China.

FITNESS instructor Ng Kah Wen walked away with a gold medal and cash prize of 30,000 renminbi (RM17,621) from the 2019 World Mermaid Championship for his performance as an ocean king poisoned by polluted seas.

Held at the Canton Fair Complex in Guangzhou, China from Aug 30 to Sept 1, Ng beat 69 other contestants in the contest.

The mermaid competition in China is a first for the group of Malaysian participants.

To enter, they submitted a video of their underwater performance in April. Results of their selection were announced in July.

For his effort in helping some of the other contestants settle visa issues and connect with each other despite language barriers, Tan was presented the Friendship Award, a subsidiary title in the championship which came with a certificate and a crown.

The team described mermaiding as a cross between freediving and synchronised swimming.

Three of the participants received their training from freediving and mermaiding instructor Alexander Wang at Scuba G Mermaid and Diving Club.

Beijing native Wang, whose qualifications are accredited by Scuba Schools International (SSI), worked on the team’s choreography using an underwater camera to record their moves.

Meanwhile, Lu trained under Lee Boon Leong, popularly known as Dolphin to his students, at a mermaid school in Klang.

Dolphin has 10 years experience in training mermaids for performances.

Scuba G co-founder Siew Kum Hoong said the onus was finding competitions not akin to beauty pageants but those that judged participants on technical ability.

At the championship in China, participants went through two stages.

The first was a technical drill where participants were required to perform face down, side and face up dolphin kicks — the core foundations of mermaid swimming techniques.

The second was freestyle choreography where participants must choose two songs for their underwater performance.

Buoyancy control, dance moves and knowledge of life saving and rescue techniques must be part and parcel of a mermaid’s skill.

But a pertinent requirement is being able to hold one’s breath underwater. Participants need to be trained for this long before they can take part in a competition.

The current trend in mermaiding mainly focuses on recreation and fitness but should the need arise for suitable candidates, Wang and Dolphin said they were able to field up to 12 names for a performance.

“Holding your breath underwater is a bit like meditation. You have to tell your mind that your body has enough oxygen, ” said Siew whose club also trained Malaysian magician Vikneswaran Allagu, or better known as Vikey, for his water torture escape act.

Ng, who can hold his breath for two-and-a-half minutes in static conditions, began training over a year ago under a freediving instructor. Under dynamic conditions, his longest record is 40 seconds.

Sharing their training experiences, Acacia revealed that she once saw illusions of floating pineapples due to carbon dioxide build-up. That was six months ago and she can now hold her breath

for two minutes in static conditions.

Lu, who has five years experience, said she was once hauled out of the water shivering uncontrollably, a sign of hypoxia. Her current record is three minutes and 30 seconds underwater.

Safety remained a major concern for mermaids during a performance or in competition, said Dolphin.

“It is easy for a mermaid to forget things when he or she is set on doing their best.

“But once you run out of breath, it is not easy to swim to the surface with a tail on, a feat which requires strength. For this reason, mermaids do not train alone or dive without the support of a safety diver, ” he added.

Despite his win in the championship, Ng has no plans to take part in future competitions.

“I intend to become a mermaid instructor after this, ” he said.

Wang said if Malaysia wanted to seriously consider mermaid swimming as a sport, it would need a bigger talent pool.

At the moment, he only knows of three centres teaching the course in Klang Valley.

Having the right facility was a step forward, said Siew.

“There is yet a place with a large aquarium to showcase a mermaid competition.

“At present, most mermaid shows (with Aquaria as an exception) and courses are held in swimming pools where the audience can only see the action from the top, ” he said.

A willing investor who could build such a facility as a competitive and training venue would help the sport progress, added Siew. 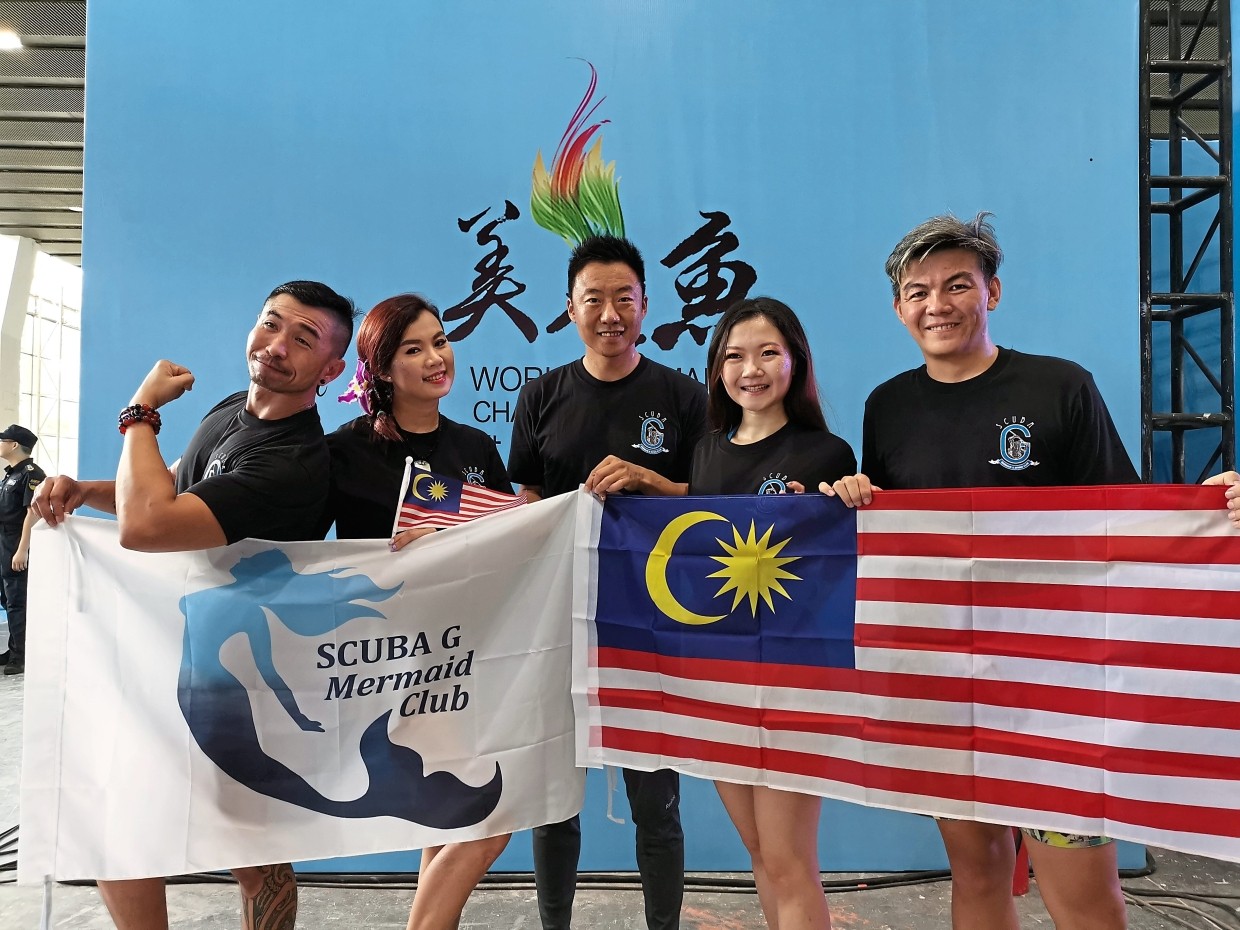 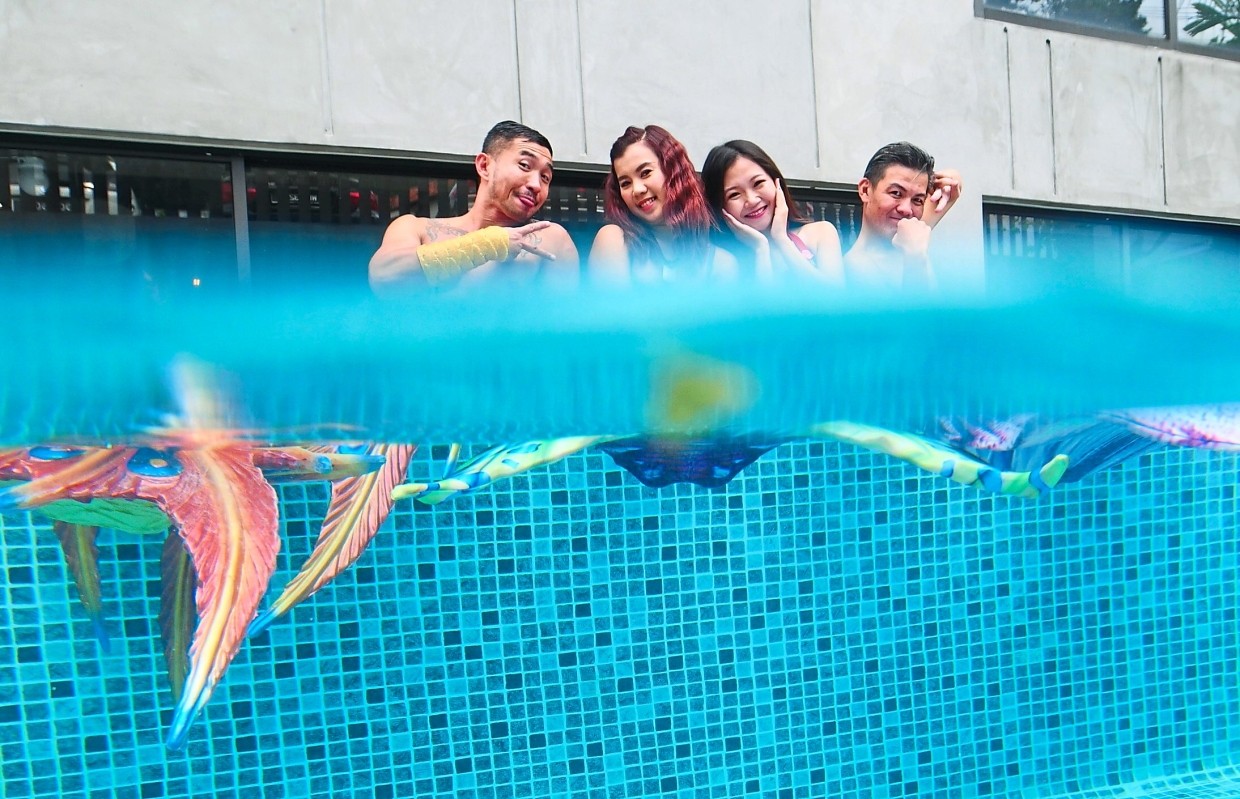 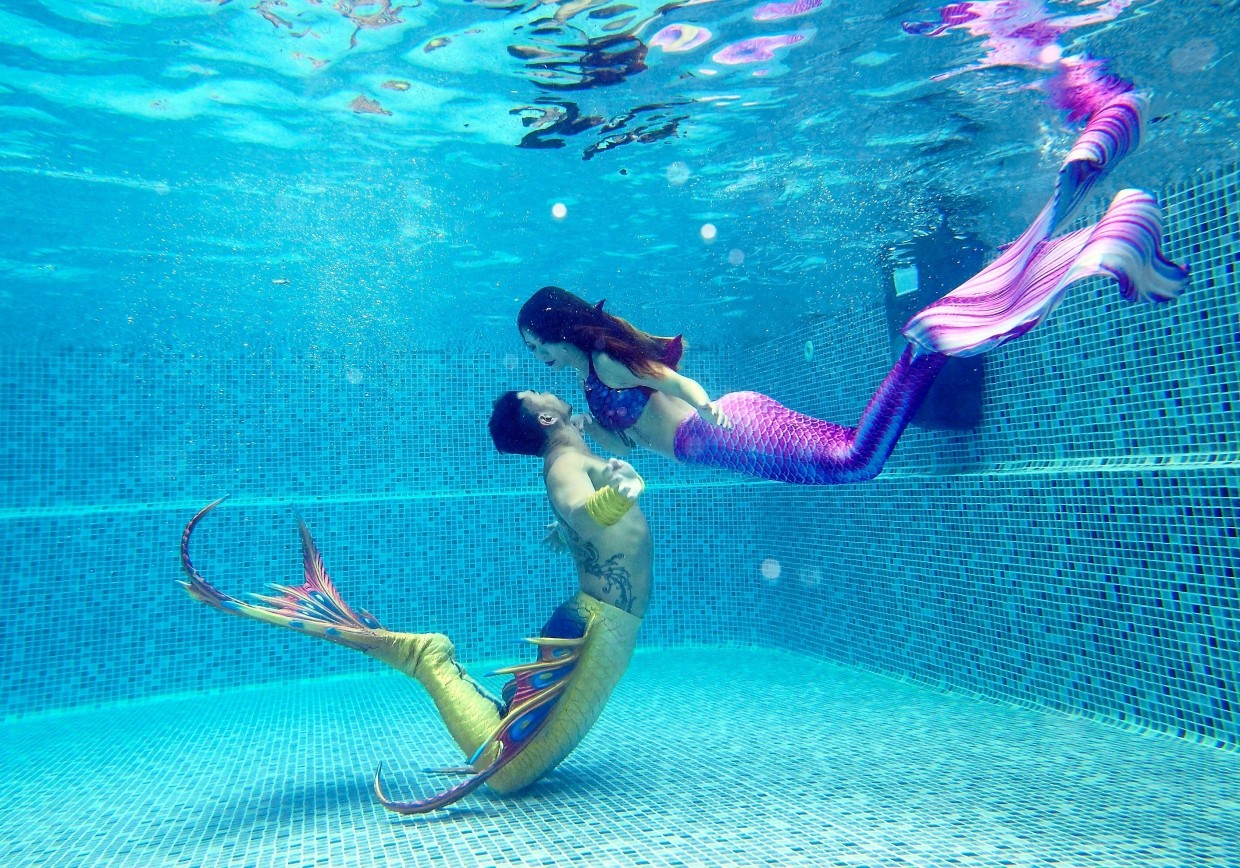 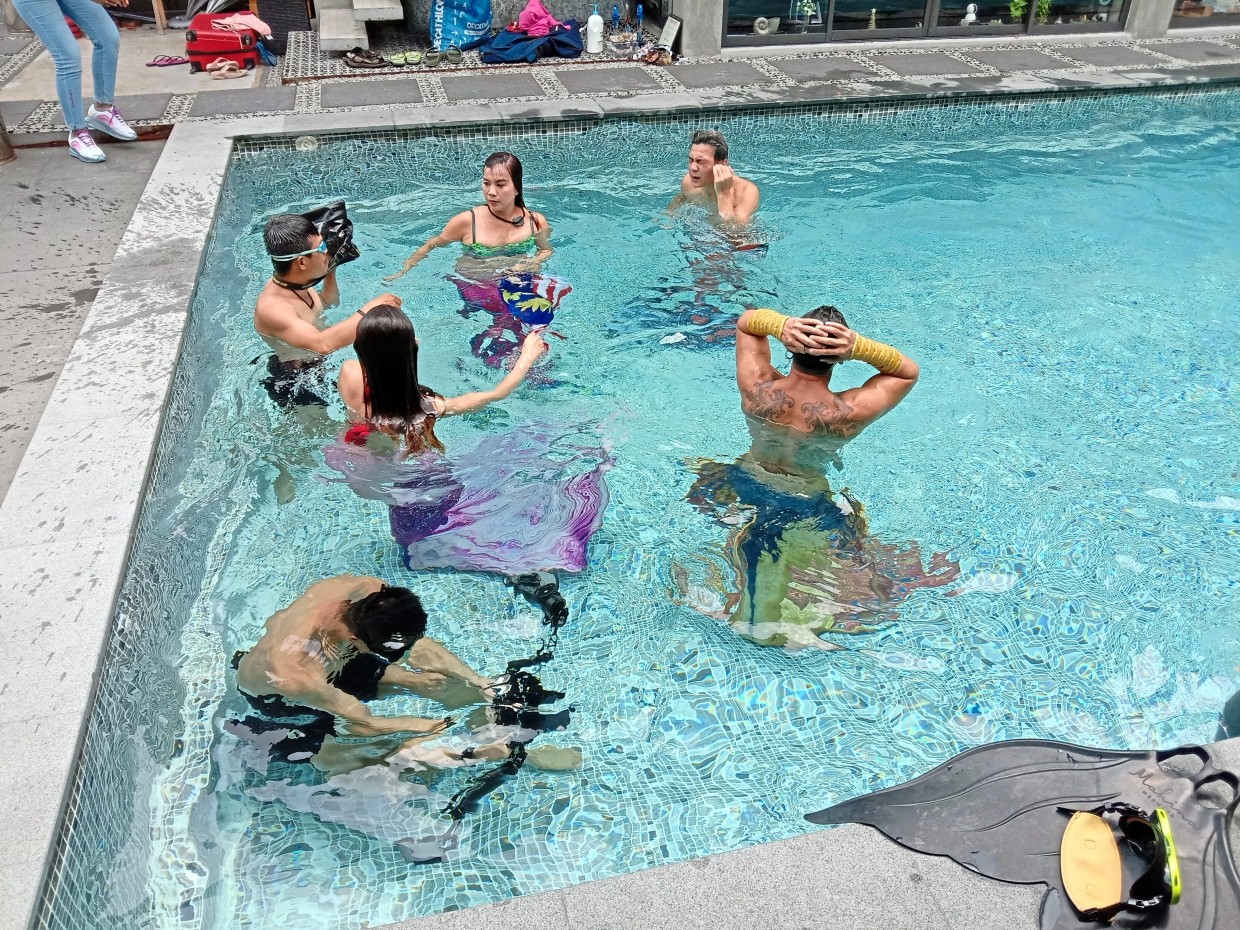 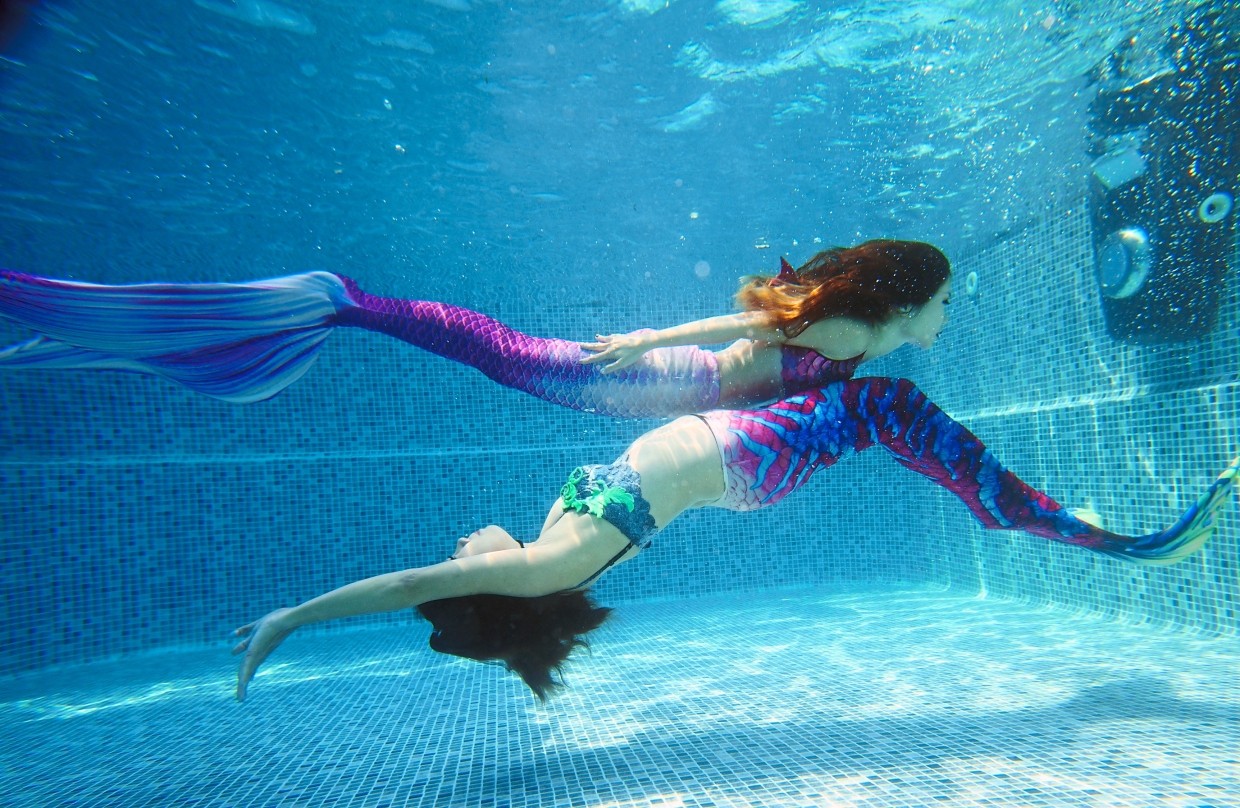 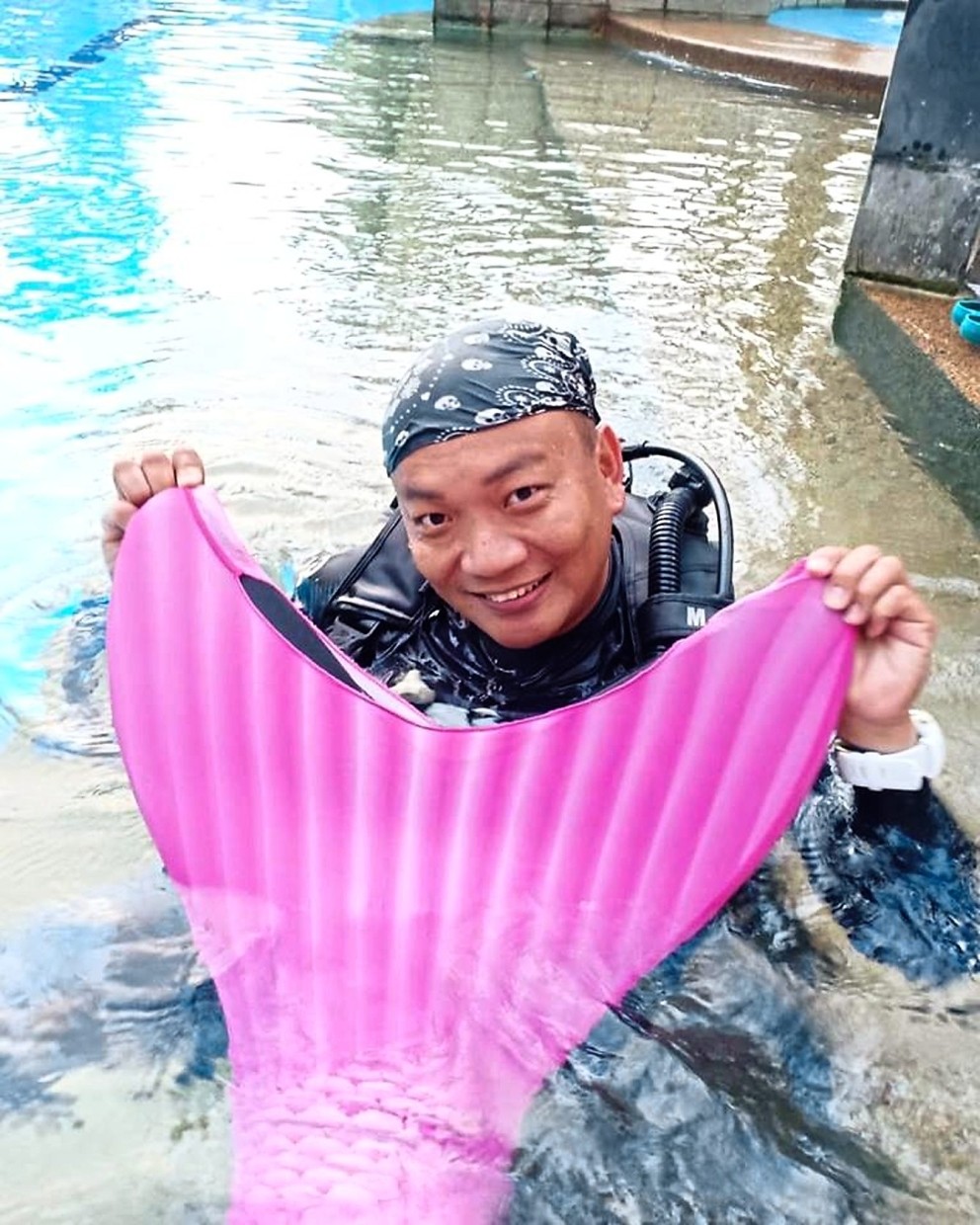 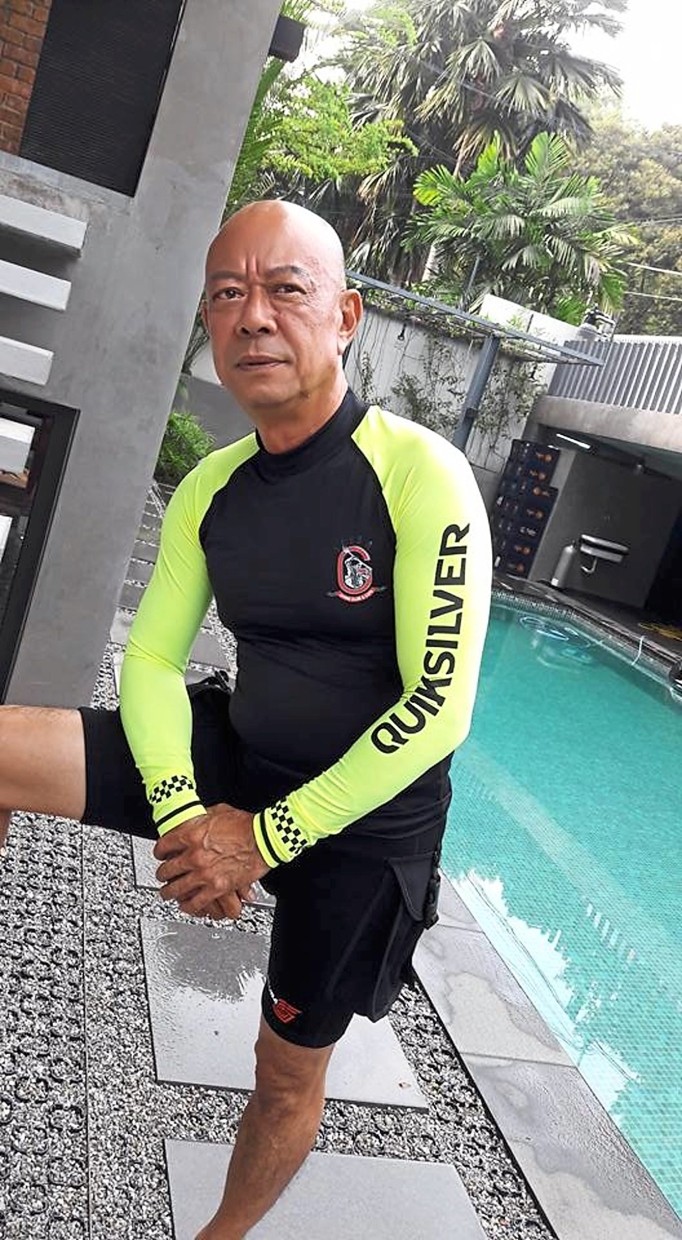 Freediving and mermaid instructor Wang (centre) with (from left) Ng, Lu, Acacia and Tan waving the Malaysian flag at the World Mermaid Championship in China.

(From left) Ng, Lu, Acacia and Tan make up the Malaysian team who competed in the 2019 World Mermaid Championship in Guangzhou, China end of last month. — Photos: ART CHEN/The Star

Ng and Acacia (right) acting out a scene in an underwater storyline. They were part of the Malaysian team at the World Mermaid Championship 2019 in China.

The mermaids and mermen getting ready for practice.

Acacia (top) and Lu, holding their breath underwater as they perform in a synchronised routine.

Group shot of the mermaids and mermen (left to right: Lee, Tan, Ng and Lu) who competed in the World Mermaid Championship 2019 in China.

Dolphin says safety remains a major concern for mermaids and mermen when performing or in a competition.

Ng getting into his silicone merman tail. Winning the championship in China is a stepping stone to him becoming a mermaid course instructor.

Siew says the onus is finding competitions where participants are judged on technical ability.