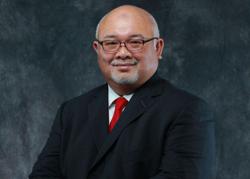 Prior to joining BDB, he worked in various corporate sectors.

He was called to the Malaysian Bar in 1994 and was formerly an advocate and solicitor of the High Court of Malaya.

He started his career as a lawyer with established legal firms, Azman Davidson & Co and later, Zaid Ibrahim & Co, specialising in construction, property development and privatisation before becoming a partner in an investment advisory firm.

In the international arena, Mohamed Sharil was a board member of the Internet Corporation for Assigned Names and Numbers (ICANN), the global internet domain name coordinating body and chairman of ICANN’s Government Advisory Committee, from 2004 to 2007.

In 2017, in recognition of Mohamed Sharil’s contribution to the global internet community, his alma matter Aberystwth University in Wales conferred on him an Honorary Fellowship.

He was recently appointed an advisory board member to the United Nations University Institute for Computing and Society.

Mohamed Sharil is presently senior advisor with Quantephi Sdn Bhd, a boutique investment advisory firm in Malaysia and a senior advisor to Asean Advisory Pte Ltd, a specialist advisory and consulting firm based in Singapore.

His area of expertise is corporate restructurings, turnarounds and mergers.

In July, Mohamed Sharil was appointed to the Board of Directors of OPCOM Holdings Berhad.

Mohamed Sharil in his statement said “I thank BDB for the trust placed in me. I look forward to working together with the team to revitalise the company.”

BDB is an investment holding company, having a diversified business segment in property, engineering and construction, road and quarry, and leisure and hospitality.