Promoting Taiwan tourism at the recent MATTA Fair were (from left) Ye, her husband Steve Lin, Teng and Chiu.

Today is the day the Chinese celebrate the Mid-Autumn Festival.

In Malaysia it is commonly celebrated by eating mooncakes and having lantern parades.

The festival is celebrated yearly on the 15th of the eighth month in the lunar calendar.

In other parts of the world, the festival is celebrated somewhat different.

We will look at how the Taiwanese do it.

Jaden Teng, the owner of the Long Yun Leisure Farm in Yilan County, Taiwan, said with the transition from summer to autumn, the weather is cooler and suitable for people to have outdoor barbecues.

“During Lunar New Year people have the reunion dinner indoors and during mid-autumn, it is time to be outdoors and enjoy the cool autumn air,” he said.

As for its origin, Teng said it started as a commercial gimmick where barbecue sauce manufacturers promoted outdoor barbecue during the festival and it later became customary.

Shinny Chiu said for the Taiwanese, the Mid-Autumn Festival is the second most important festival following the Lunar New Year.

“It is a public holiday and some would take a few days off work.

“The preparation for the Mid-Autumn Festival starts days before the actual day,” she said.

Unlike the new year where the adults, especially housewives, decide the menu for the reunion dinner, for the Mid-Autumn Festival she said the children have a say in the selection of ingredients to be barbecued, be it meat, seafood or vegetables.

“Preparation for the barbecue was a family affair. Housewives and mothers cook all year long, now is the time for others to share the burden.”

They are part of the team from Taiwan that were in town recently to promote tourism at the recent Malaysian Association of Tour and Travel Agents (MATTA) fair.

Just like Malaysians, mooncakes are also consumed during the festival.

Fish Ye, who runs a leisure farm with her husband Steve Lin in Taiwan’s New Taipei City, said there are varieties of mooncakes in Taiwan.

Being a chef, Ye makes her own mooncakes and pastries for the festival.

“It is easy to just buy mooncakes, it is more tedious to make your own but it shows sincerity when you gift home-made mooncakes to your friends and family.

“The traditional mooncakes have pineapple jam or yam filling,” she said, adding that she made curry flavoured mooncakes this year.

Chiu said aside from the Cantonese-style baked mooncakes or snowskin ones commonly found in Malaysia, other popular varieties in Taiwan are those with egg yolk, mung bean, sweet potato and yam pastry.

“The yam and sweet potato pastries are healthier options compared to the Cantonese style ones as it is made using less oil,” she said.

In recent years, she said the trend is to make their own mooncakes.

“It is not just housewives, but young men and women also show their culinary capabilities.

“Young guys would make their own mooncakes to impress their partner; and husbands feel macho when they take over the task from their spouse.”

“Furthermore, with the increased awareness of eating healthy, you can choose the ingredients yourself and go for healthier options and control the amount of ingredients used.”

Just like Malaysians, the Taiwanese also eat pomelo, which are in season during the festival.

“After removing the flesh from the pomelo skin, children tend to wear them as a hat for fun.

“At our leisure farms, families would visit to pick the pomelo themselves,” said Chiu.

Adding to this, Teng said mochi was also eaten during the festival.

“It is one of the items we use as offering during Mid-Autumn Festival prayers,” he said, adding that eating the chewy treat too has become a custom.

“It also symbolises unity as everyone works together to pound the mochi in a mortar,” he said.

Lee Zee Wen, 24, a Malaysian currently working in Taiwan, shares her experience of celebrating the festival there.

“When I was studying in Taipei, I would celebrate the festival with fellow Malaysian students.

“After graduation, most of them returned to Malaysia while I found a job here and stayed on,” she said, adding that she then celebrated the festival with her Taiwanese friends.

“My friends invited me for their barbecue parties with their friends and family.

“I noticed that they do not hang lanterns or have lantern parades or lantern riddles contests like we do in Malaysia.

“They do that only on the 15th day of the first lunar month, which is the day we celebrate Chap Goh Meh,” she said.

How the Taiwanese celebrate Mid-Autumn Festival 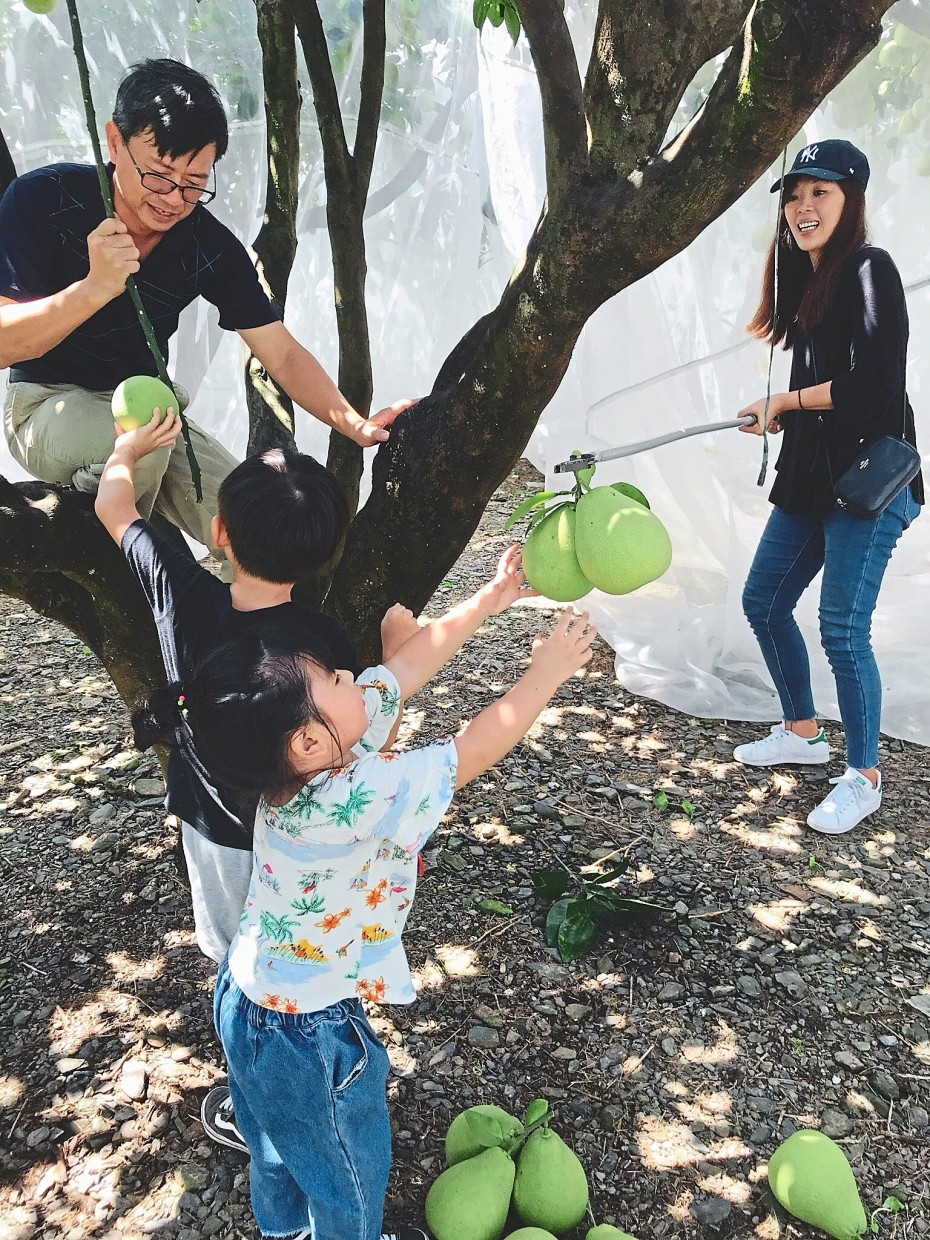 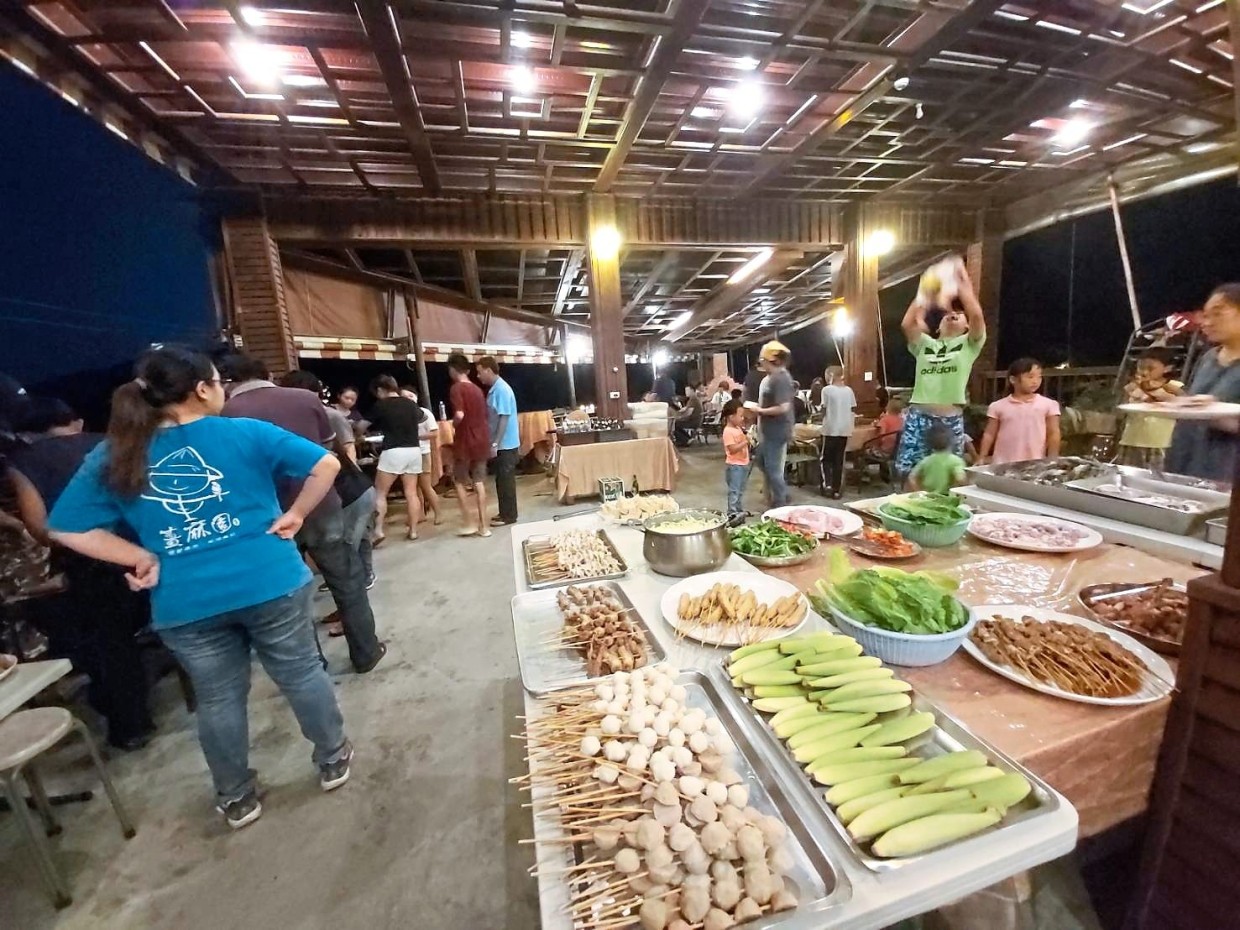 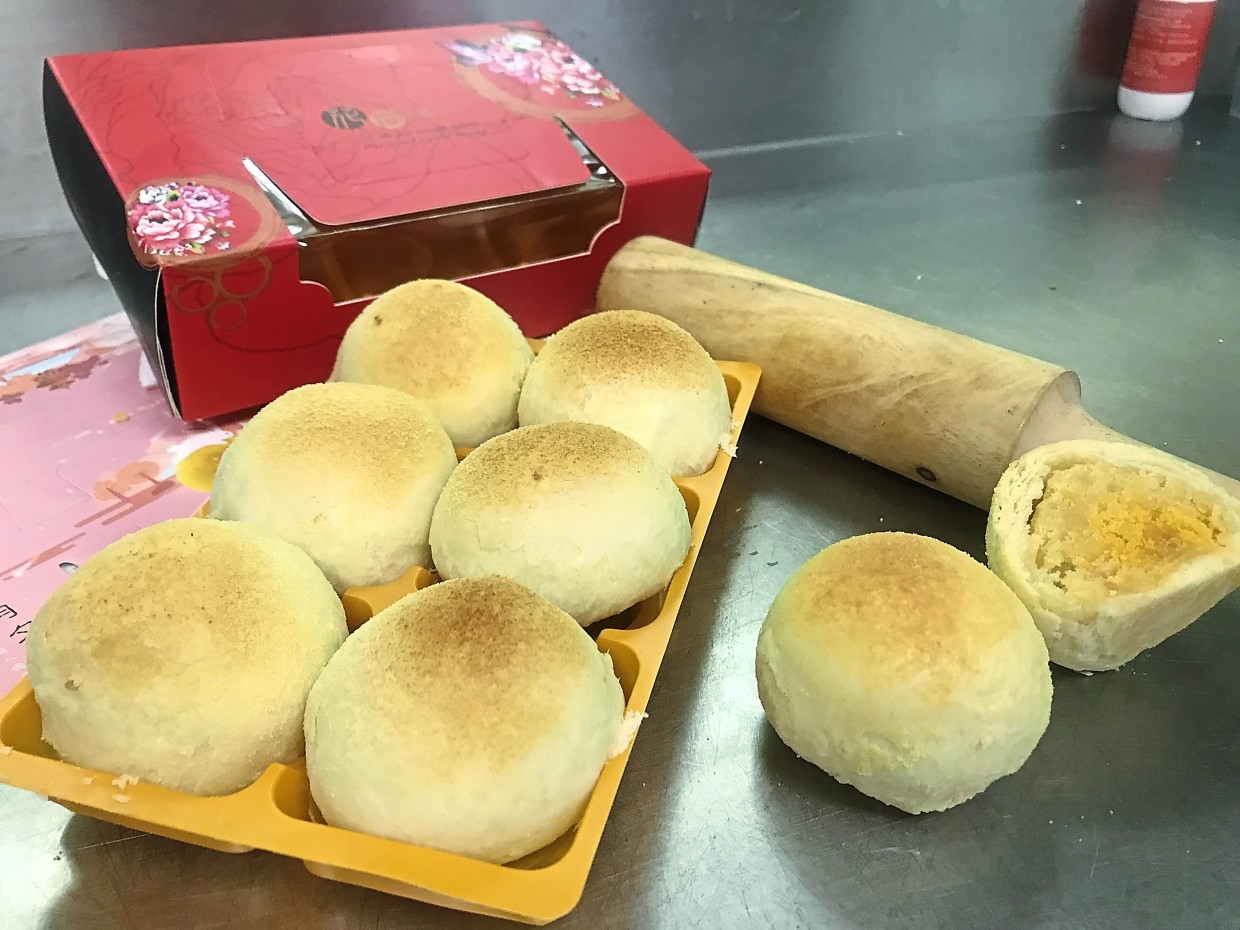 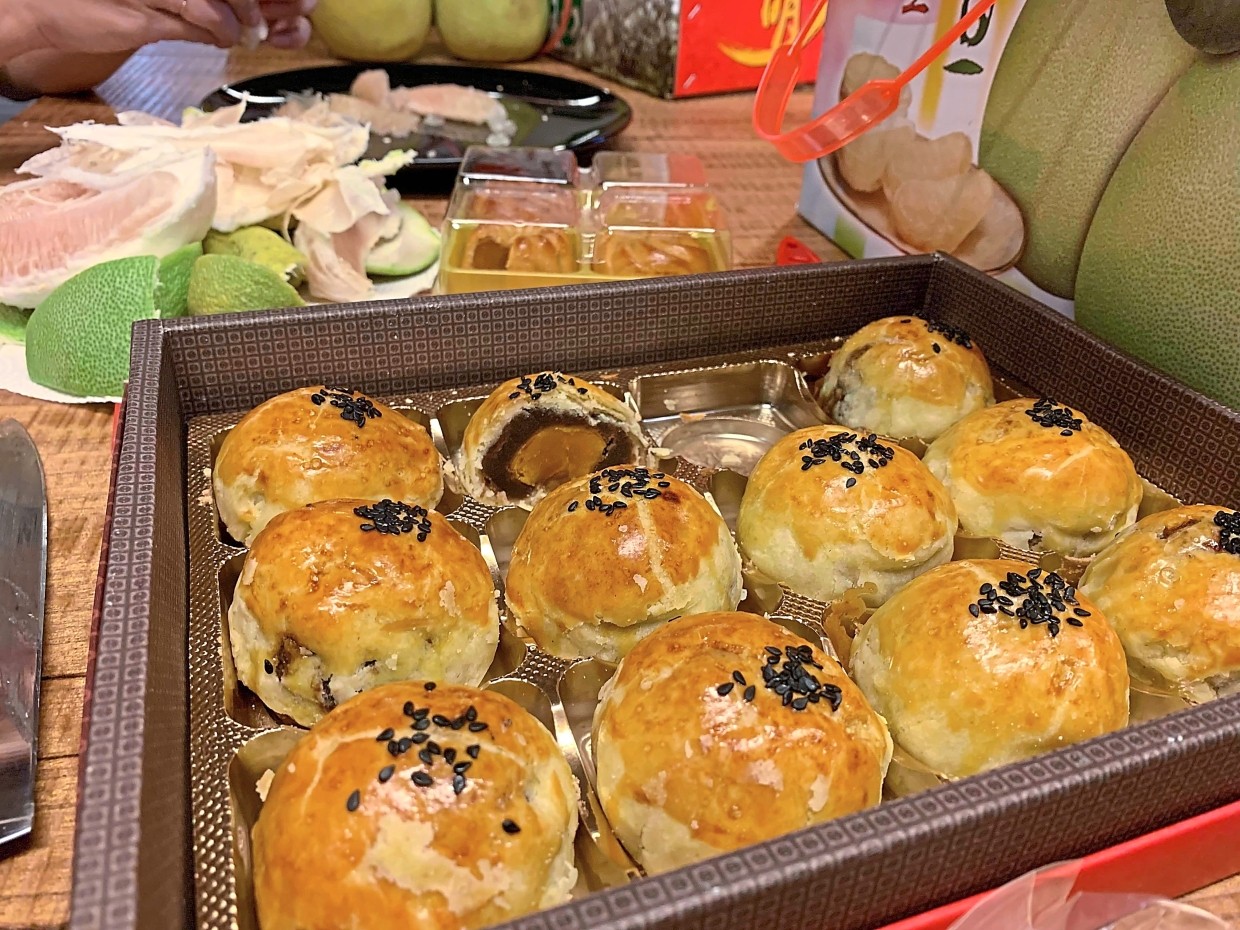 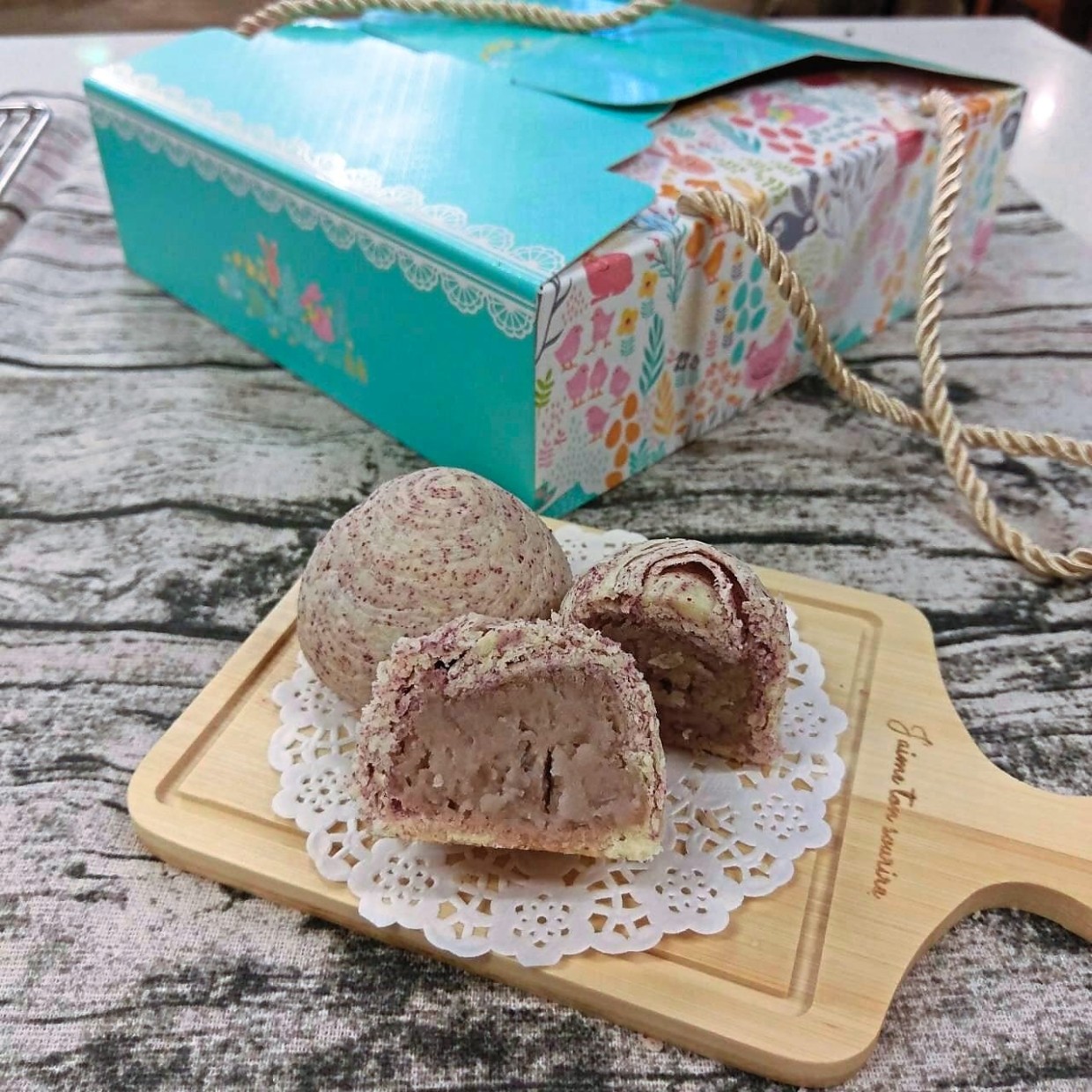 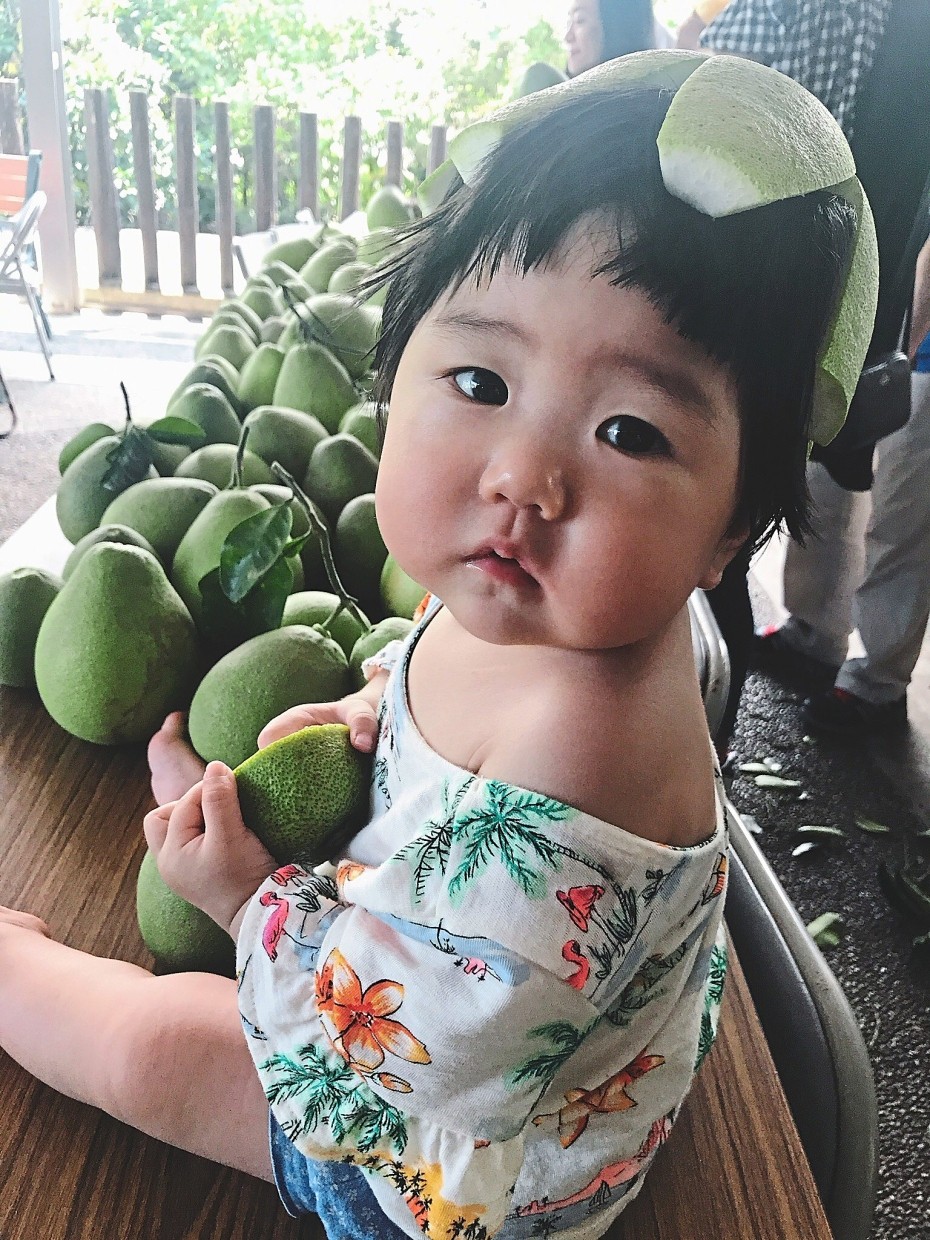 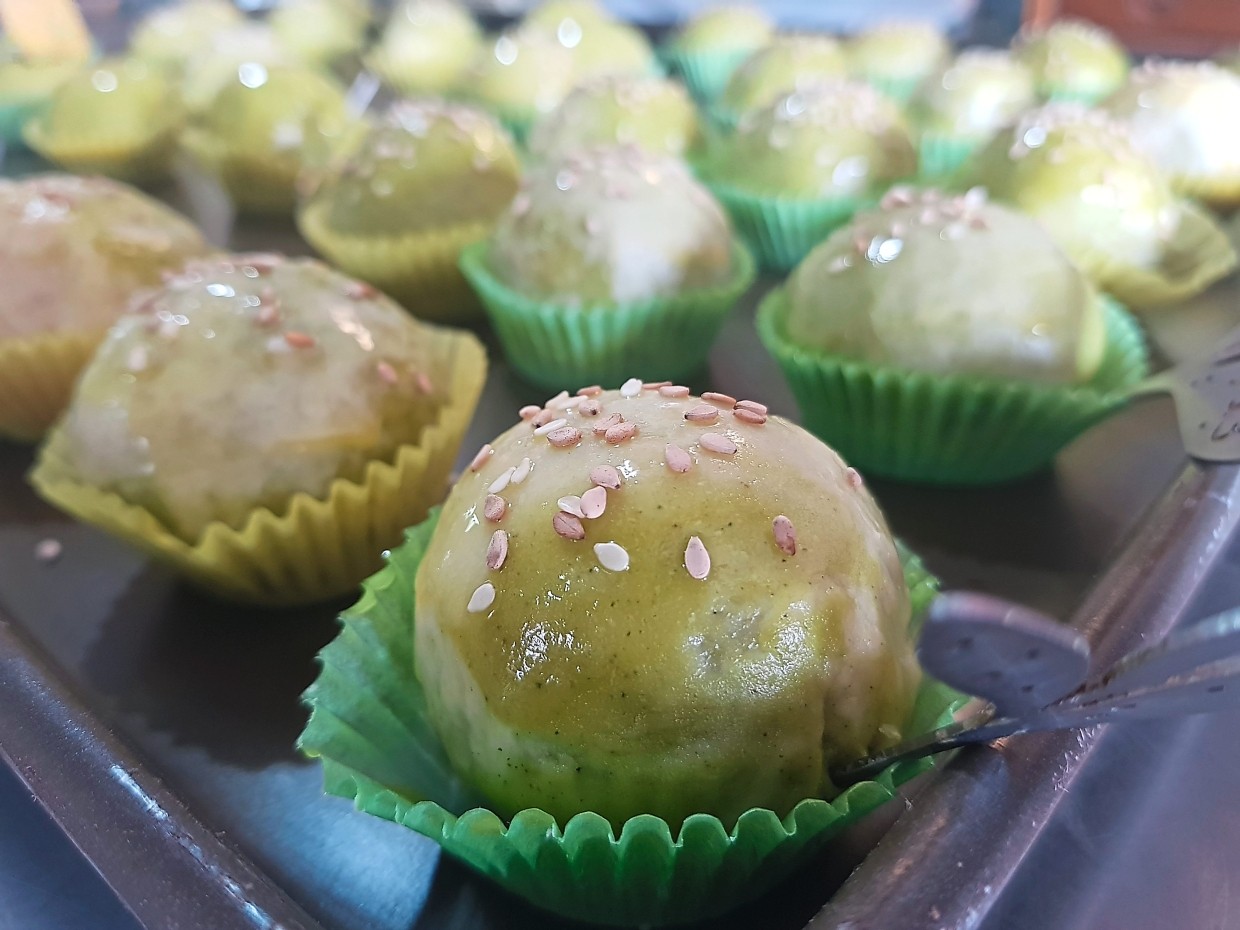 Promoting Taiwan tourism at the recent MATTA Fair were (from left) Ye, her husband Steve Lin, Teng and Chiu.

Families can pick their own pomelos for the Mid-Autumn Festival in Taiwan. The Taiwanese variety is smaller in size than the Malaysian type. — Courtesy photos

Outdoor barbecues are held during the festival as the cool air is most conducive for outdoor celebrations.

Egg yolk pastries are popular among the Taiwanese during the celebration.

Yam pastries are commonly consumed during the festival.

Children in Taiwan, like this child, wear the pomelo skin as a hat to add to the festive fun.

Green Tea mooncakes are also sold during the festivities.