From vision to reality

A picturesque view of Putrajaya at dusk, with the Putra Mosque which has a dome made of rose-tinted granite standing at right.

PUTRAJAYA was built on a dream. And by various accounts, it is a dream place to live in.

Just ask Azahari Ibrahim, 49, who moved from Jerantut, Pahang to Putrajaya in 2001 to carve out a better life for himself.

“I took the leap of faith and moved in with my siblings who worked in Putrajaya, while I looked for work here. I got a job as a clerk.

“When it came time to settle down, I bought a house in Precinct 9 where I live with my wife and daughter, ” said the Putrajaya Disabled Association chairman, who now runs a business selling medical supplies.

“I find Putrajaya to be very disabled-friendly, including the recreational and commercial areas. I can drive but I also use public transport.

“I feel that Putrajaya encourages inclusiveness among its community, ” said the wheelchair-bound Azahari, who is also a member of the Federal Territories Residential Representative Council (MPPWP).

Another MPPWP member, 66-year-old Roslan Hanif said Putrajaya was a good place to raise a family. 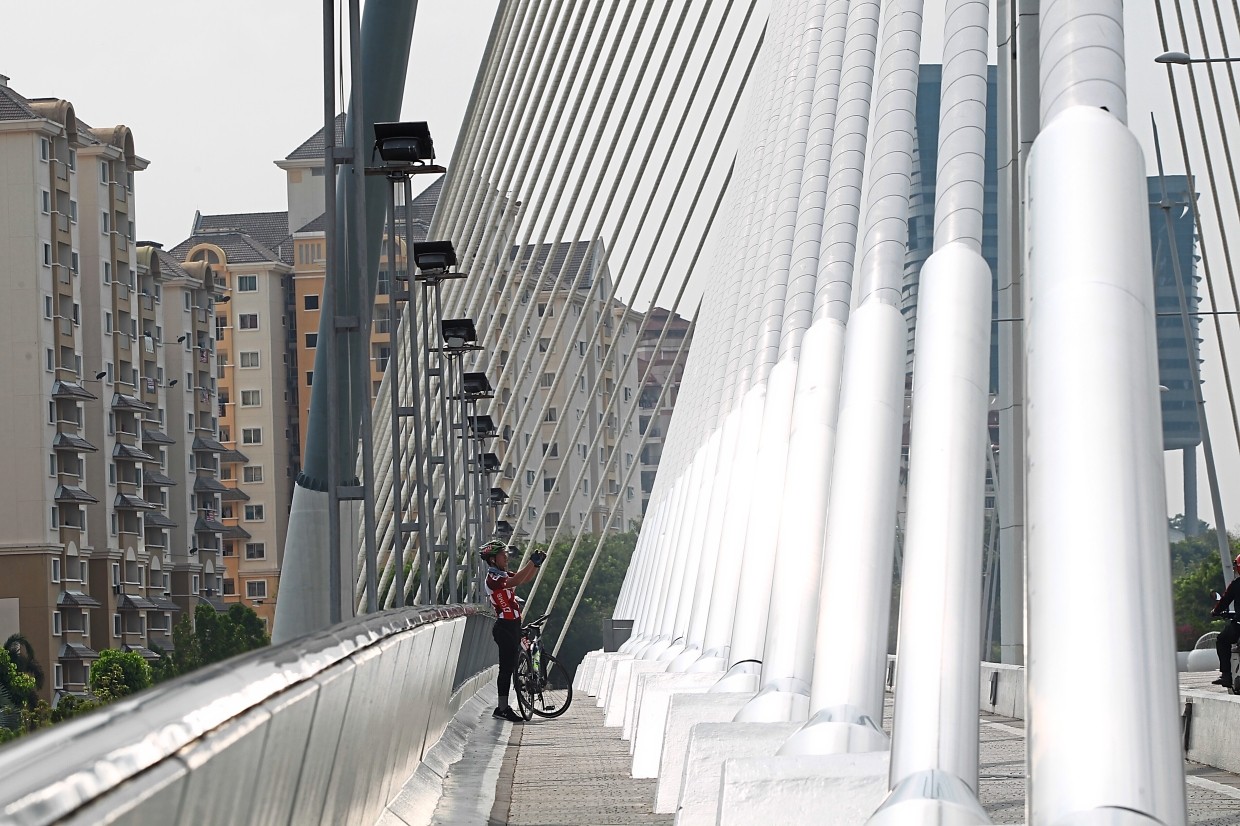 Seri Wawasan Bridge is one of the main bridges in Putrajaya and a popular spot for photography given its futuristic single-span cable-stay design that looks like an open sail.

“I stayed in Kuala Lumpur prior to moving to Putrajaya in 1999. I used to park my car in KL Sentral and take the ERL to my workplace. The total journey would take me about two hours because of the traffic jam in Kuala Lumpur, ” said Roslan, who decided to relocate to Precinct 8 in Putrajaya.

“My wife was a government servant and worked in Putrajaya too. So things worked out well for me and I raised my seven children here.

“Two of my children who are married, have also bought houses in Putrajaya.

“It is also a great place to retire in. Many of the people I know said they wanted to go back to their kampung but have ended up staying here, ” said Roslan.

“We have a peaceful environment in Putrajaya despite it being a capital city.

“There are parks and many choices for recreational activities for the elderly.

“There is also a hospital if we need medical treatment.

Retiree Hong Ling Yean, 60, who moved to Precinct 8 in 2005, said his property had more than doubled in value. “Previously, I lived in a single- storey house in Shah Alam. I worked for a property development company which was involved in a project in Putrajaya. As such, I knew the potential of this new city and so invested in a double-storey corner link unit.

Hong said he recommended to friends to buy properties here as well and they were all happy with their purchases.

“With the Kuala Lumpur-Seremban and MEX highways, it has good accessibility, especially for those working elsewhere.

“I truly appreciate the landscape and greenery here too.

“Everything looks organised and well-maintained. The roads are wide and clean. Plus, there are many parks and places for leisurely walks.

“Those who live here will never want to move out. We can get everything we need and it is also close to towns like Kajang and Bangi, ” he added.

Next year, the federal administrative capital will celebrate its 25th anniversary.

The 90,000 residents and 70,000 working population are testaments to the city’s growth over the years.

Formerly known as Prang Besar, which was primarily populated with oil palm and rubber plantations in Sepang, Putrajaya was created from a vision for a township to be a model for greater innovation, green standards and sustainable practices.

Putrajaya Holdings Sdn Bhd (PJH), the master developer of Putrajaya, was given the task to transform the agricultural estate into an architectural marvel that was an exemplary township with a balance of well-planned residential and commercial components.

PJH development senior general manager Hassan Ramadi said the dream was of a modern Islamic-inspired heritage city envisaged as a paradise with beautiful gardens, animals in their natural habitat and a cool pleasant environment for people to live in.

“Putrajaya is encapsulated by the theme ‘Garden City, Intelligent City’.

“It is a modern, liveable and sustainable city that can meet the demands and challenges of today and tomorrow.

“The future challenges for this city include being socially responsible and sustainable in development, in light of growing environmental and climate change concerns, and transforming itself into a ‘Green City’, ” he said.

“Of the planned 3.9 million sqm of government building, 3.4 million sqm have been built, which translates to about 87% completion.

“However, only 32,758 residential units and 0.4 million sqm of commercial space is completed, which come to only 26% and 12% respectively of what has been planned.

“There is still much room for development in other sectors too, such as sports, recreation, tourism and education, ” he added.

Hassan said PJH’s development aspired to cater to the current needs of property owners, occupants and various other stakeholders, as well as to offer the best long-term investment value for future generations.

“For example, development of neighbourhoods that have better access to services and facilities,

and meet the target market expectations in terms of budget, workmanship, security and universal design.

“Commercial properties will be designed to be ‘smarter’ and flexible, such as conventional large format offices and multi-functional spaces.

“Location will also be strategic for an integrated live-work-play lifestyle and near transportation hubs for better mobility, ” he highlighted.

One of the few people who witnessed the birth and rise of Putrajaya is 61-year-old Norhazifa Mohamed, who was attached to Putrajaya Corporation’s (PPj) corporate communication and tourism department from 1997 until 2007.

Norhazifa, who lives in Subang, said she felt a sense of pride every time she stepped into Putrajaya.

“I saw what it was before, which was nothing like it is now.

“My task back then was to speak to the people, among whom were government servants, politicians, world leaders and visitors, about the Putrajaya master plan. It was not easy to convince people of this idea because it was something new and they were skeptical.

“It was an even more difficult task because there were no proper roads. I had to take visitors around the area and even had to push the car when it got stuck in mud.

“Food was difficult to find nearby; we had to go to neighbouring towns like Kajang, Serdang and Bangi for lunch.

“There was no nightlife. At times when we worked late and wanted to eat after work, there was only one restaurant in the whole of Putrajaya that closed at 10pm.

“There is also plenty of food options.

“But it is sad that former PPj president Tan Sri Azizan Zainul Abidin who worked hard to build Putrajaya, is not here today to see the fruits of his labour, ” added Norhazifa.

PPj senior vice-president Datuk Omairi Hashim, who has worked in this administrative capital for 22 years, is convinced that there is no better city in the country than Putrajaya.

“I lived in the government quarters in Putrajaya from 2001 until 2006. It was lovely.

“As a town planner myself, I can see and appreciate the efforts put into building Putrajaya.

“I love that importance was given to greenery. The quarters were close to my workplace, so I have more time for family and I used to go for walks with my wife in the morning before going to work.

“My children walked or cycled to school as it was nearby. Most of the facilities were within convenient reach.

“My family also enjoyed the peace and quiet in the neighbourhood.

“I have since bought my own house in Kajang, about 32km from my workplace but there is less traffic in Putrajaya compared to other cities, ” Omairi said in explaining that the drive would be a breeze.

Roslan said there were many associations and communities in Putrajaya to keep people active.

“Our association organises programmes such as visits to hospitals to lend a listening ear to the patients who need company.

“I advise all our members to buy a house in Putrajaya because it is a good place to be, ” he reiterated.