All set for explosive cup tie in Shah Alam

AS this year’s Selangor Selection gear up to defend The Sultan of Selangor’s Cup (TSSC) against Singapore, the organisers have also been toiling behind the scenes to ensure that tonight’s programme runs smoothly.

Fans are eager to see if Selangor can hold off the visitors at the Shah Alam Stadium in front of an expected full house to clinch the title for the second year in a row.

Selangor managed to sweep all three trophies last year, with the youth coming out tops in a 2-0 win in the Under-16 Schools Challenge.

The Selangor and Singapore veterans put on a great show during the curtain raiser which saw the match decided on penalties in favour of Selangor (3-2) after a 1-1 draw in regulation time.

Selangor Selection capped off a memorable evening with a triple delight for the Merah Kuning fans when they defeated Singapore’s 5-3 on penalties after a thrilling match that saw both sides tied at 1-1 in normal time. This year’s selection, led by B. Sathianathan, will see the majority of players from Selangor’s Super League squad paired with some from PKNS FC for their clash against Singapore.

Currently sitting third in the Malaysian Super League, the combination of players are expected to put their best foot forward against Singapore’s selection of players, including Christopher James Van Huizen, Syahrul Sazali and Kyoga Nakamura.

Fans wanting to enjoy the oldest rivalry dating back to the formation of Malaya will also be able to catch a glimpse of Datuk Soh Chin Aun, Datuk Santokh Singh, Zainal Abidin Hassan and many others in the veteran’s clash tonight.

Going up against them before the main match are Singapore’s well-known legends which include the likes of Fandi Ahmad, Ho Kwang Hock and Ahmad Sayuti Ali, among many more.

The Schools Challenge featuring Under-15 boys will kick off the festivities with future stars of Selangor and Singapore in action.

Even though they cannot match their elders in experience, the Schools Challenge should not be discounted as shown in last year’s under-16 match. 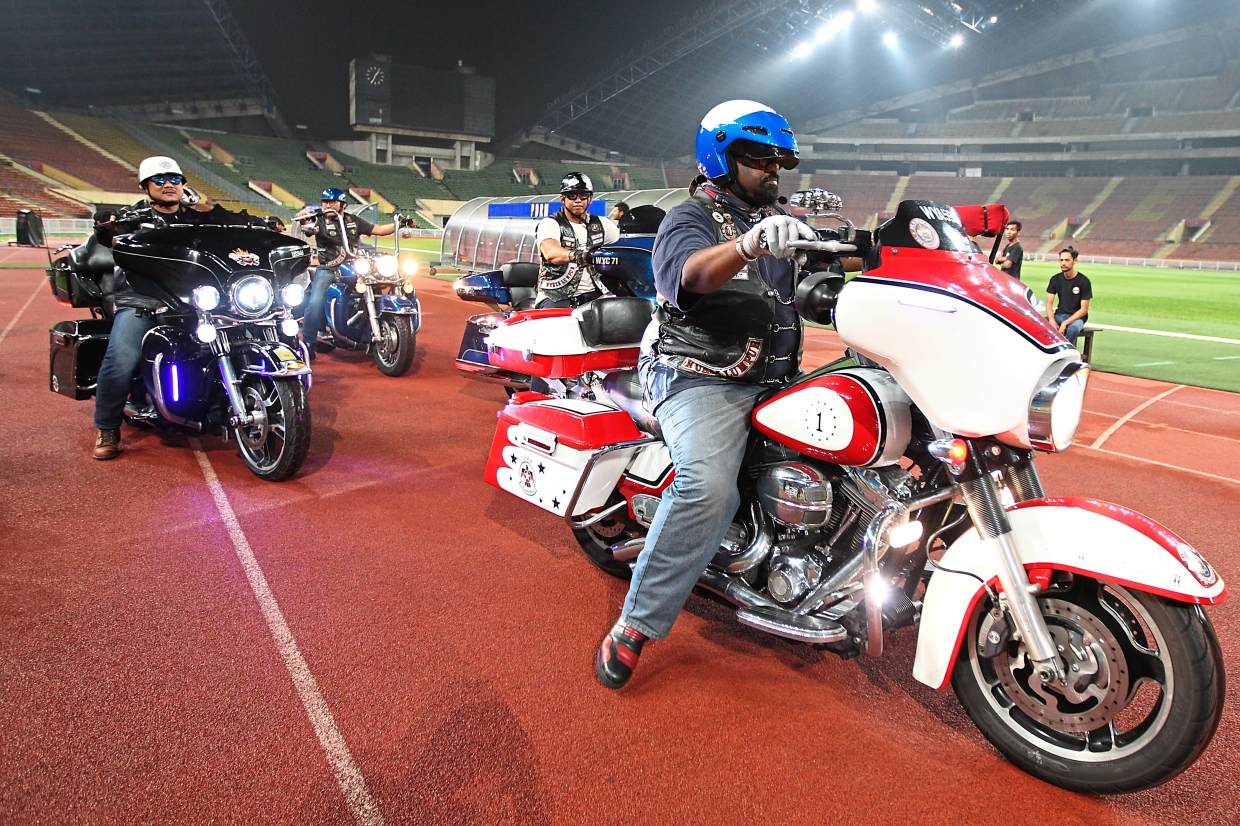 Members of the Kingz Motorcycle Group with their Harley-Davidson motorcycles taking part in the rehearsal for The Sultan of Selangor’s Cup 2019.

TSSC organising committee chairman Tan Sri Abd Karim Munisar, who is also Selangor team manager, said the home side would be going all out to retain the three titles this year.

“The players are in good form and they have been working hard for this year’s competition. We want the three titles and we expect the fans will be thrilled by a great night of football.

“The organising committee has also been working hard to prepare for tonight’s event, which is more than just a football competition.

“We have football lovers from all walks of life coming from all over the state and of course, the passionate Singapore supporters who filled 40 buses will be arriving today, ” Abd Karim said.

As with previous editions of the annual event, tonight’s programme will be packed with football action and a carnival-like atmosphere, promising the 70,000 fans a memorable experience.

Today’s event, which will begin at 5.30pm with the Under-15 Schools Challenge, will give fans plenty to cheer, from the thrilling opening gimmick which will only be revealed during the launch by Sultan of Selangor Sultan Sharafuddin Idris Shah, to the grand fireworks display, as well as attractive lucky draw prizes which include a brand-new Harley-Davidson Iron 883 and Honda City.

The night will also be spiced up with a procession of Harley-Davidsons, choreographed performances by Selangor school students and songs by local artistes Dayang Nurfaizah and Jamal Abdillah.

“Without the effort put in by all parties, this event would not have been possible. We started preparing since the beginning of the year and we hope fans will have a great time, ” said Abd Karim.

“Tickets have almost sold out but there are still some for sale at the Shah Alam Stadium before the match.

“We are all set, ” said Abd Karim during the final rehearsal session at the stadium on Thursday which lasted over five hours.