Some 700 rabbit-shaped lanterns are on display at Cheras Leisure Mall this Mid-Autumn Festival.

MOST people throw away garlic skin in the rubbish bin or compost heap but it can also be used to embellish and beautify a lantern.

Chow Weng Hoong, 45, from Perak, said he was inspired to make something out of garlic skin as his wife discards large amounts when cooking.

He was one of 31 participants in the “Jade Rabbit Creative Lantern-making Contest” at Cheras Leisure Mall who submitted an entry.

“Since the theme was ‘Jade Rabbit’, I thought why not use garlic skin to imitate the rabbit’s white furry body and a little bit of onion skin for its nose and ears.

“So I collected the skin and got more from the supermarket for my lantern project. It was a painstaking process as I had to paste it piece-by-piece.

“My aim was to use what is in nature to mimic the fur. It turned out beautifully as my concept was a combination between a peacock and rabbit.

“So, the white of the garlic skin ‘fur’ contrasted well with the colourful peacock, ” he said. 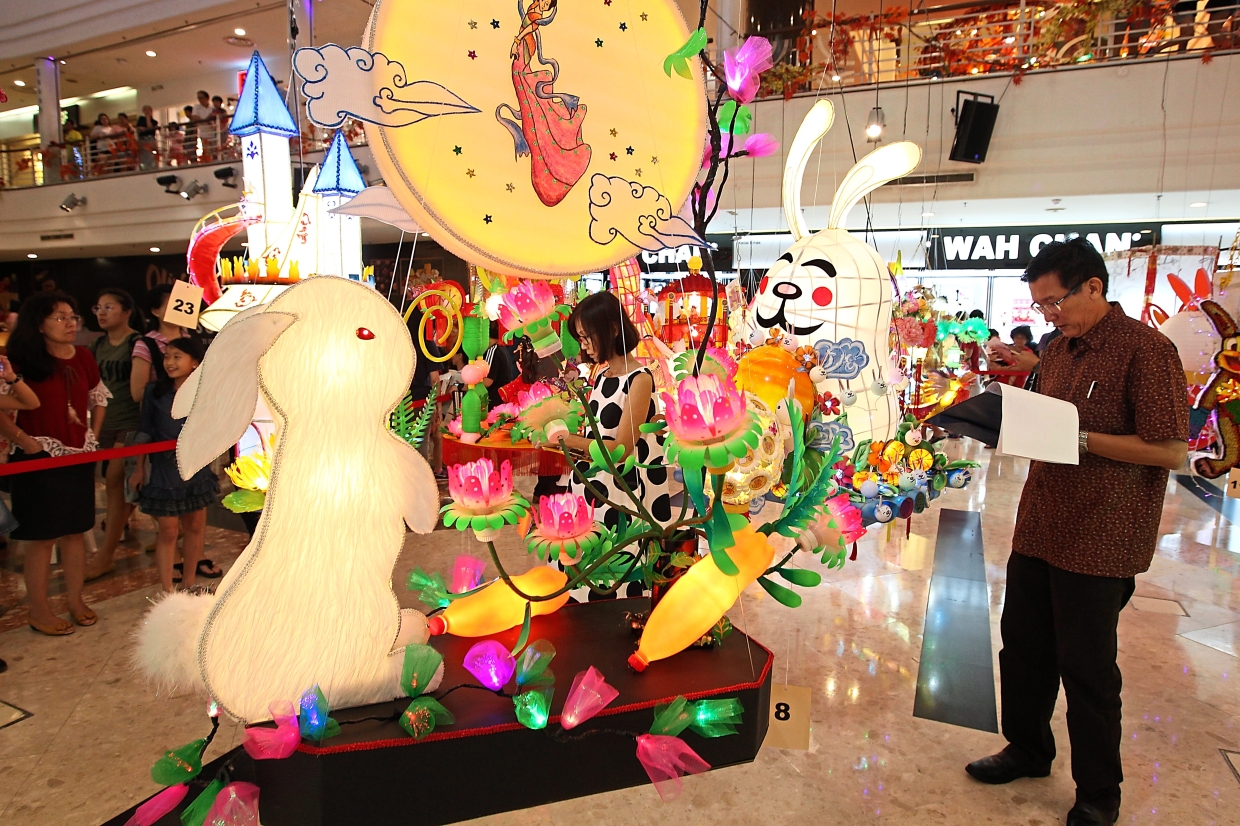 “My lantern was inspired by the Bugs Bunny cartoon character.

“Rabbits are usually depicted as either grey or white but I decided to play with bright colours for my rabbit instead as I love colourful things. For me, the Mid-Autumn Festival is vibrant and colourful.

“This is my second year participating as I love arts and craft-related activities.

“This is a good opportunity for me to showcase my talent and develop new skills.

“My two daughters also share the same interest and participated in the competition this year, ” she said. This lantern entry, ‘Filial Piety’, shows a son serving tea to his mother.

PBB Group Bhd property division senior manager Subramanian Apparow said the Mid-Autumn Festival is one of the key events celebrated at the mall as it encourages family reunions and artistic traditions.

“This resonates with the

the organisation of cultural activities.

“With the aim of preserving traditional heritage, we have been organising lantern-making competitions since the 1990s.

“This is done in an effort to educate and pass on this time-honoured Chinese traditional handicraft to the future generation as lantern-making actually requires great skill and craftsmanship, ” he said.

Concurrently, a creative lantern-making art contest was also open to those aged between six and 18 years, which was held throughout the months of June and July.

Some 700 participants took part in decorating the rabbit-shaped lanterns.

The lanterns are on display at the mall as part of its festive decorations.

The winners for both contests will be announced on Sept 13.

Cash prizes and vouchers worth up to RM96, 000 are up for grabs.