EVERY DAY, Odiah Kuruppiah wakes up with the same hope, to be able to sell more flower garlands than the day before.

The 70-year-old, who lives in Jalan Gasing, travels in his trusted white van to the Thai Buddhist Chetawan Temple daily to set up his flower stall near its main entrance.

The makeshift stall consisting of an umbrella, plastic table and plastic chairs can be seen nearby a tree where Odiah and his wife make their garlands and take shelter.

Odiah and his wife Veeramah Krishnasamy start selling flowers about 8.30am after the temple gates open. Instead of driving to the flower market to collect his stock, Odiah gets his supplier to deliver about 10 packets of chrysanthemum flowers in different colours to the stall.

“Yellow chrysanthemums are still popular but some customers prefer other colours too, so we have to order a variety for them to choose from, ” he said, adding that the red, green, orange, blue and purple ones were artificially dyed and made an interesting contrast to the range of chrysanthemums.

The couple take turns to cut raffia strings according to a measured length that Odiah has marked on the plastic table.

“We do this everyday so we have already created a marking here (on the table).

“It is easier that way, we don’t need to keep measuring the length with a ruler, ” he said, adding that he learned the art of making garlands when he was 12 years old.

Back then, he would spend his after-school hours roaming the grounds of an Indian temple with his parents and coincidentally picked up the art from the flower garland-makers there.

“They taught me how to make the garlands because I had nothing to do after school, ” he said.

After completing secondary school, Odiah took up several cleaning jobs at residential homes, offices and even worked on a ship in Singapore.

Upon retirement, he decided to sell flower garlands to make ends meet. 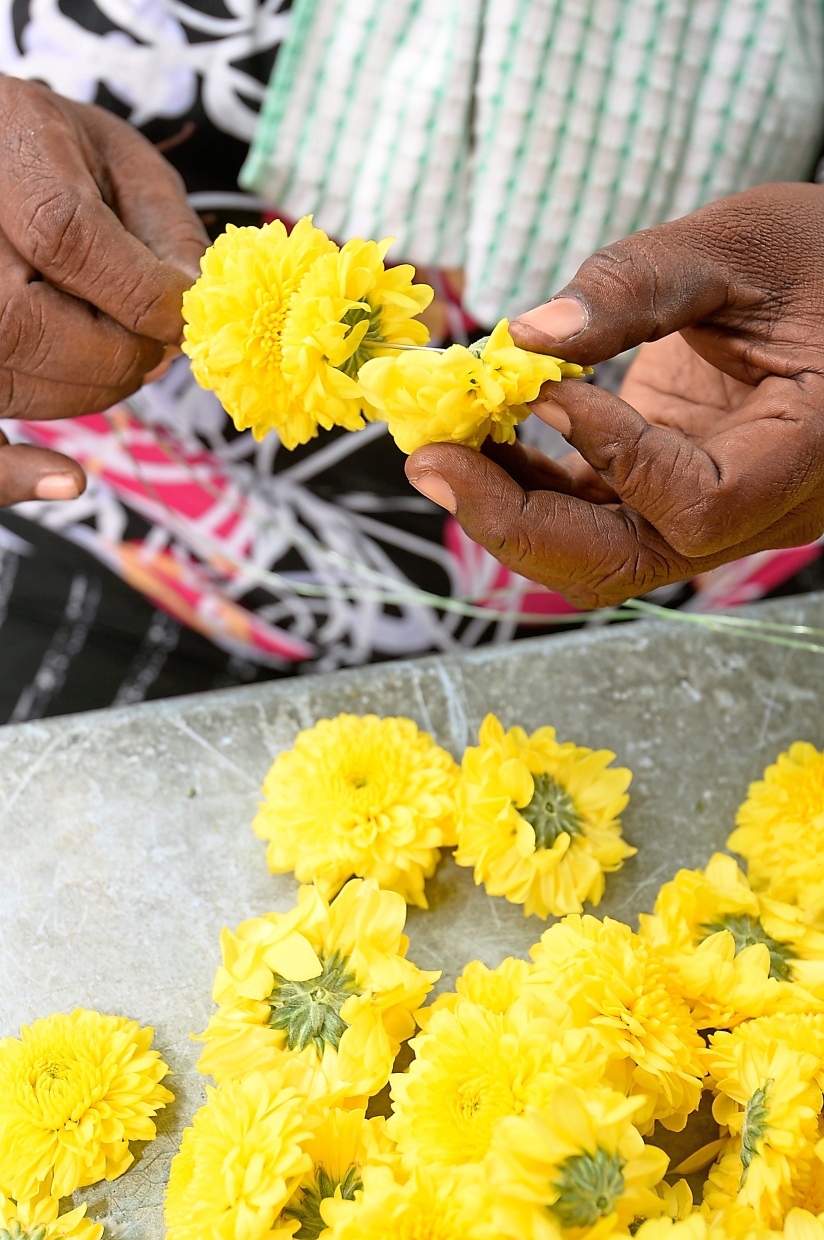 It takes Odiah a little more than a minute to make a small garland of chrysanthemums.

It was also a good way to spend time with his wife as they both could help each other earn a living.

He said his 55-year-old wife underwent two knee operations and was finding it difficult to move around.

“This is the only job which we can do together and I get to watch over her as well, ” he said.

Their two school-going children, aged 16 and 18, occasionally come by to assist their parents.

Odiah said business was slower on weekdays as there were not many visitors to the temple.

“We only get very busy when it is a festive period and there are many devotees but we still manage to meet orders because it does not take very long to make a simple garland, ” he said.

He strings together a small garland with about 11 chrysanthemums after separating the flowers from the stems. A large needle

with raffia is then used to string the flowers together and secures the end with a knot.

“We sell small garlands as they are easy to hang in cars, decorate at home or place at the altar, ” he said, adding that it was also lighter and affordable at just RM5 each.

The garlands, he said, would last up to five days depending on where they were placed.

Several students from a secondary school nearby, who were walking home, greeted the couple as they walked past and Odiah returned the greeting.

“We have been here for so long and we have seen them grow up as the years go by.

“Some have even left after completing their studies but they still remember us, ” he said.

Although the couple enjoy making flower garlands, they have had bad days too. There was a time when they became victims of snatch thieves.

“We lost some money and the jewellery my wife was wearing was taken away, ” he said, adding that he was more careful now and advises customers to be alert all the time.

Asked when his rest days were, Odiah said “We have no off days, we are here everyday unless we have a hospital check-up to go to.”