Shekhinah PR has teamed up with Ohana FC in the #ProjekKasutBolaOhana CSR project to help SK Lemoi’s football team known as The Botaks who are the school district champions.

CAMERON HIGHLANDS: Hanisah Mat Hussin wakes up every morning to the chill and fresh morning air that seeps into her bedroom at her teaching quarters situated deep in the interior of the highlands.

Her daily routine revolves around preparing to teach a group of Orang Asli children in SK Lemoi, the sole school in the Orang Asli settlement, which can only be accessed using 4-wheel drive (4x4) and via a two-hour ride from Ringlet.

For Hanisah, her living conditions can be considered basic but manageable compared to the Orang Asli children

The boys among her pupils shot to social media fame after she featured their exploits on her Twitter and Instagram, and thereafter they became fondly known as The Botaks...for obvious reason.

The Botaks emerged district champions in football despite the incredible odds stacked against them.

They live in the isolated interiors of central Malaysia and walk a distance - or if they are lucky, hitch a ride on motorcycle -- to the river to continue their journey by boat.

According to Hanisah, there are three villages in this settlement --- Kampung Lemoi, Kampung Telimau and at the furthest is Kampung Cenan Cerah. 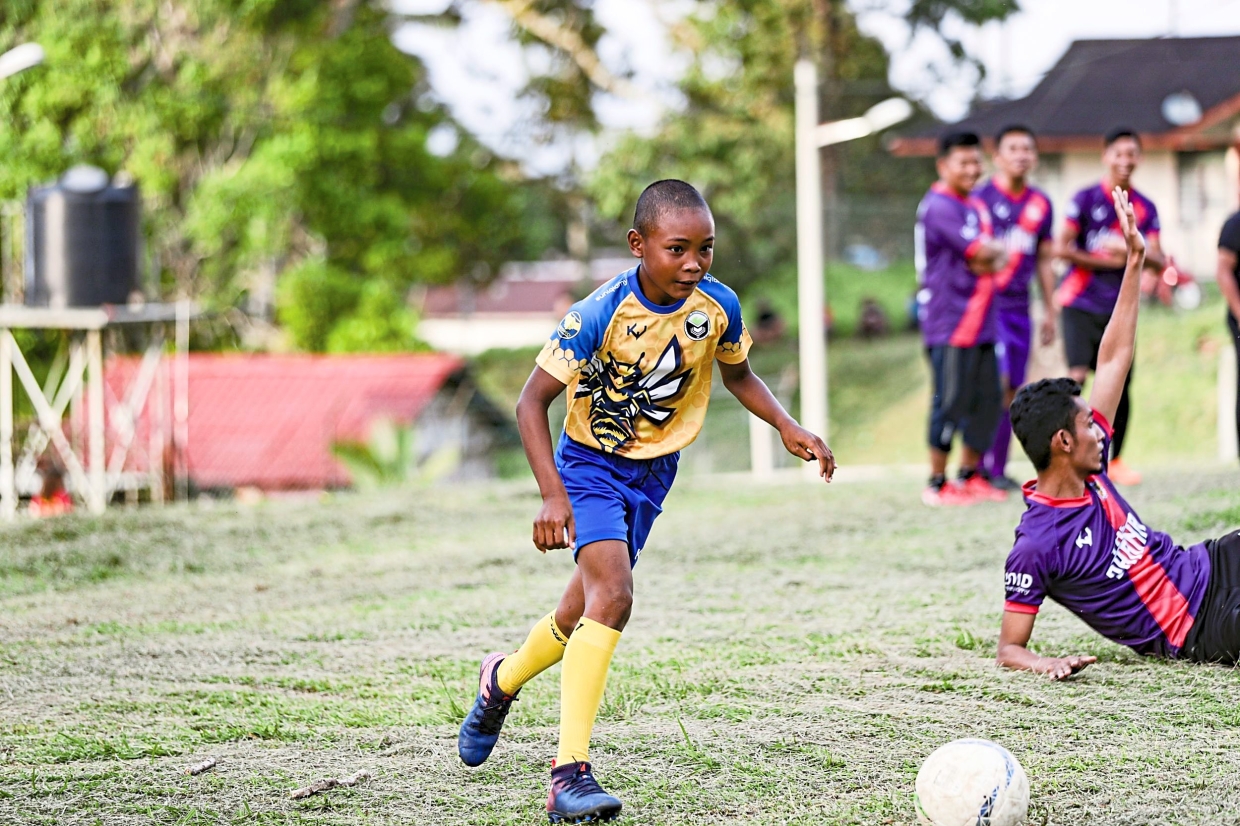 A player from The Botaks displaying his dribbling skills during the friendly match against Ohana FC who visited Kampung Lemoi.

“The players and pupils from Kampung Cenan Cerah have to travel two hours to get to school every day.

“Some pupils stay in the hostel provided and will travel together to school on the first day of the week and walk back to their kampung together on Fridays,” she said.

“After The Botaks emerged district champions, I tweeted about their achievement despite them not having proper footwear (boots) like the other teams,” she added with a sense of pride.

Hanisah, who is active on social media where she goes by the handle @bungolale, has been teaching at SK Lemoi for 10 years.

“To get to Kampung Cenan Cerah is the most difficult. One can only get there on foot or motorcycle but even then we can only go up to halfway, and will have to continue the rest of the journey by boat,” she explained.

The plight of The Botaks caught the attention of TV personality Hanif Miswan, more fondly known as Anip, who read about the pupils’ exploits on social media and immediately got in touch with Hanisah to see how he could contribute.

Hanif, a footballer himself and playing for amateur team Ohana FC in the Klang Valley League, said he got his team together and shared the idea of buying football boots for The Botaks.

His idea was enthusiastically received by his fellow players who later roped in sports public relations consultant Christoper Raj, who helms Shekhinah PR, and #ProjekKasutBolaOhana was born.

“The players in The Botaks play barefooted or make do with cheap boots,” said Hanif.

“’Ohana’ in the Hawaiian language means ‘family’ and The Botaks are a part of the football family. We have to ensure no one in the family gets left behind.” For Charred Cirikwong, a sports executive with Shekhinah PR who was among the group that visited the village, it was an unforgettable and poignant experience to see the sheer joy on the children’s faces despite facing the many obstacles in their young lives.

“It is certainly a humbling experience seeing these children make do with so little and yet never lacking in anything.”

The visitors made the two-hour 18km drive in a 4X4 vehicle deep into the jungles of Cameron Highlands on narrow mountain roads flanked by deep ravines.

On arrival at SK Lemoi, the visitors were greeted by 57 pupils, among them the footballing heroes who took SK Lemoi to the summit of the Cameron Highlands School Sports District Council (MSSD) 2019.

As champions, the team will represent the district in the upcoming Pahang School Sports State Council.

Facing multiple obstacles and challenges has not dampened the spirit of the Orang Asli children from the Semai ethnic group in showcasing their true footballing potential.

Two youngsters, Robin Zali and Lasaros Anuar, both aged 12, have already been called up to join the Pahang Under-12 squad.

But this would not have been possible if not for the efforts and sacrifices of three teachers who also double-up as coaches for SK Lemoi football team. They are Mohd Syafiq Mohd Karim, Mohd Akmal Haffiz A Karim and Zulzaidi Hashim.

“I am in my fifth year with SK Lemoi and this team proves that you can still succeed despite facing numerous adversities. One of the boys had sewn his boots 10 times over after they came apart that many times,” Syafiq related. “The Orang Asli’s attitude is different from the rest of us. They are receptive to instructions and really respect us as teachers. I feel this is something that gives them the edge over other players.

“These children spend their time honing their skills playing football every evening,” he added.

For coach Zulzaidi, The Botaks are a team close to his heart. Zulzaidi himself is an Orang Asli.

“I am not a stranger to them because I myself am an Orang Asli, although not of Semai and I live in a kampung in Maran, Pahang,” he said.

“After receiving this contribution and sponsorship, we hope they (the players) will perform even better.

“We have already started to train students from Year Two and Three for next year because a number of the players will graduate from primary school then.

“We have identified 20 back-up players to move into first team.”

He added: “My sole purpose is to help the children, be it in studies or on the field. What they lack is additional learning materials.”

“Hopefully we will unearth the gems through this Ohana project,” said Christopher.