The ‘ACO Water Filter’ invention that uses activated carbon made up of discarded coconut shells and orange peel.

But the children from Prai, Penang, proved that anything is possible when you put your heart and mind into it.

That was the first international award for their school.

The pupils impressed the judges with their clever invention called ‘ACO Water Filter’ which is activated carbon made of recycled coconut shells and orange peel powder.

Their creation was adjudged the Best Invention in the Environment category, beating entries from schools in Germany, the Philippines, China and Indonesia. 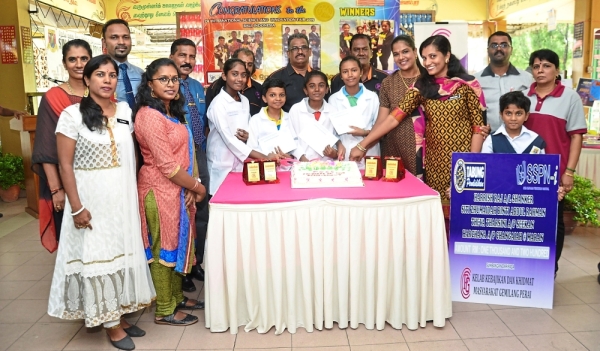 SJK (T) Ladang Prye pupils (in white coats from left) Siti Zhumaidah, Harrish, Theva Tharsini and Harchana being honoured at the reception by their teachers and members of the Prai Gemilang Community Club. With them is club chairman Suresh Chelliah (middle of back row, with glasses).

“Activated carbon eliminates impurities and with the orange peel as an additional absorbent of pollutants, you can have a perfect drink with a better pH and nice taste,” he said.

He was speaking at a reception to honour their success by Prai Gemilang Community Club at the school canteen recently.

Harrish said they were inspired to use the particular organic wastes upon observing the mass disposal of coconut shells during Thaipusam and orange peel during Chinese New Year.

Theva Tharsini said their project focused on the green practice of reduce, reuse and recycle, adding that it helped reduced the need for expensive synthetic chemicals to purify water.

Harchana said their invention had the potential to be considered for greater commercial use in agro-based engineering.

The annual competition, which was organised by the Indonesian Young Scientist Association, is aimed at recognising the knowledge of children today, especially in the field of science.

Science head teacher N. Pugeneswari, 35, who is also the project manager, said the award was well deserved as the team took almost two months to complete the project.

“These four pupils are highly analytical and have great interest in science.

“I know they will go far in life,” she said.

Earlier in April, the same team won gold medals in the Sirim Invention, Innovation & Technology Expo 2019 in Alor Setar, Kedah, for their inventions of odour remover sachets and teeth whitener with activated carbon.

They also generated herbal water by combining sachets of basil, coriander, oregano leaves and moringa seeds as filtering layers for the herbal-based water.

“These are natural products. Moringa is well-known as a ‘miracle tree’ for its many medicinal properties and uses.

“Though the school is small with limited resources, we are proud that they are able to produce award-winning students at international level.

“We wanted to celebrate this success with the rest of the pupils and teachers for their guidance and support,” he said.

More than 160 pupils, teachers and Parent-Teacher Association members were treated to pizza, fried chicken, cakes and other refreshments.