There are a few fountains inside the newly opened Langkawi Garden of Rainbows and Butterflies. When the angle of the sun is just right, rainbows will be seen at most of the fountains like this fountain which sits on top of a giganitc rock.

MILLIONS of flowers in the Langkawi Garden of Rainbows and Butterflies will take your breath away as you stroll along the meandering paths.

Nowhere else on the archipelago can so many flowers be found together, and so visitors — especially nature photographers — will have a field day delighting in the profusion of butterflies, stingless bees and many other insects that feed on nectar and pollen.

Look carefully and you will find tiny Spiderhunter birds that weigh just a few grammes. Cousins of the American Hummingbird, these Spiderhunters hover daintily over flowers and sip nectar with their long and slender beaks. 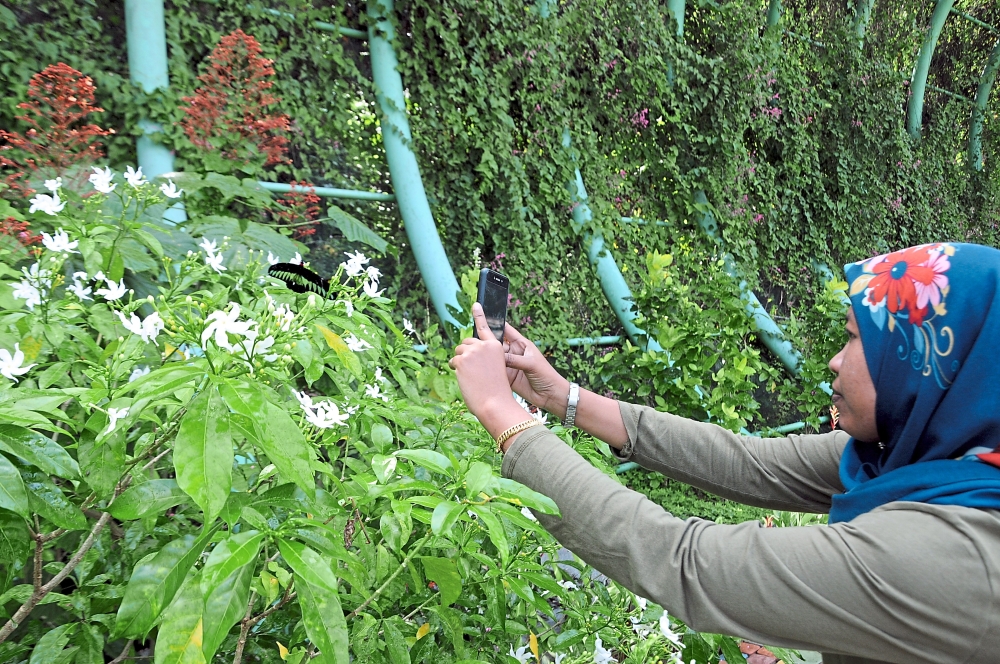 A visitor taking pictures of butterflies fluttering among flowers inside the cocoon-shaped dome at the newly opened Langkawi Garden of Rainbows and Butterflies near Telaga Harbour Park in Langkawi, Kedah.

“We have such a variety of fauna here because the garden has more than 30,000 Ixora plants that produce hundreds of flowers each all year round.

“Ixora flowers give a lot of nectar,” said Charles Fong, the garden’s co-founder.

Fong said in February 2010, Tun Dr Mahathir Mohamad requested him to build the garden at Pantai Kok, near Telaga Harbour on the west side of Langkawi island. A general view of the cocoon-shaped dome in the garden.

An old friend of Dr Mahathir, Fong revealed that he was the one who suggested that Langkawi should have the Brahminy Kite as its mascot, and the archipelago needed a cable car.

The Prime Minister, he said, felt that Langkawi also needed a garden as an attraction and asked him to build one.

“It took us over nine years. Every plant was meticulously placed. Some of the plants died because they were not suitable for the soil or the weather, so we had to change species. 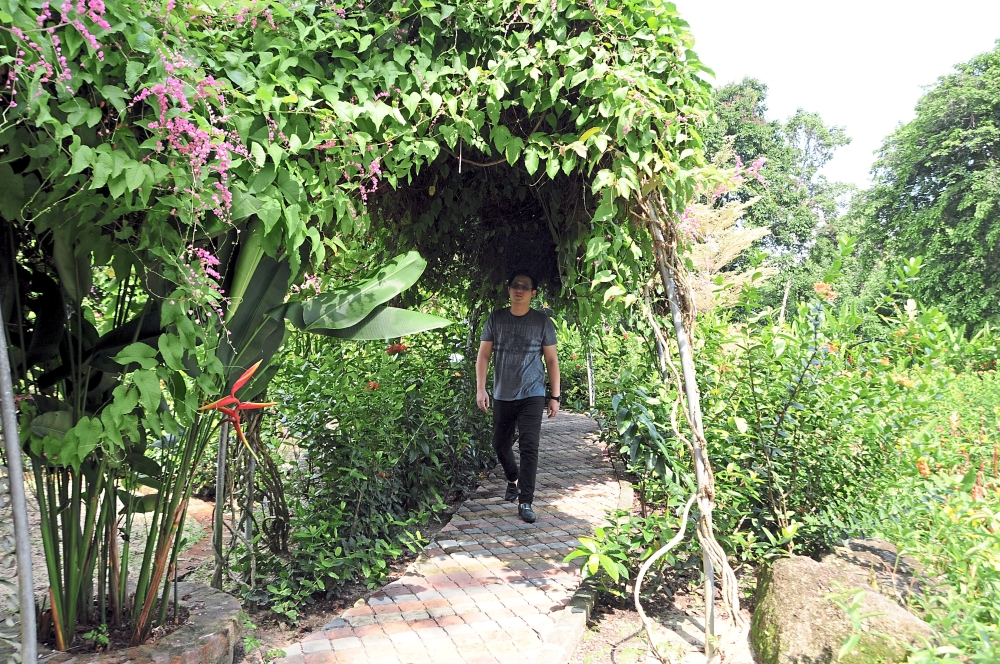 Ng strolling through a sheltered walkway built out of Honolulu Creepers.

Over 300 species of flowering plants are in the garden, including thousands of Heliconia, Balsam, Lantana, Hibiscus, Honolulu Creepers, Queen’s Wreath and Pagoda flowers.

While building the garden, Fong said they found a natural feature of the land which is part of the reason that Langkawi is a Unesco Global Geopark.

It is a single granitic boulder, 550 million years old, 45m across and more than 10m high.

It is a geological treasure because it is part of Earth’s old super-continent called Pangea, which split apart in a massive tectonic movement more than 220 million years ago.

Initially, Fong said it did not look that large because it was covered in earth and overgrowth. At night, the main building of the glows with thousands of LED lights.

“As we jetted water to wash off the soil, we were amazed by how large it is so we kept on washing it till it looks like this now,” he said, adding that the boulder extends far below the ground.

On top of this rock now is what turned rainbows into a part of the garden’s name.

A fountain that sprays mist into the air, far from any obstructions, creates a multitude of rainbows when the angle of the sun is just right. Two butterflies hovering over flowers to drink nectar in the Langkawi Garden of Rainbows and Butterflies.

“The rainbows usually appear around 8.30am to 9.30am on a clear day or around 4pm. It depends on how clear the day is and also the humidity,” he said.

Another spot in the garden where rainbows can be found is at the dome with more fountains not far from the garden’s entrance.

This dome turns blue at night with special lighting, and with mist generators pumping out clouds of vapour, it is indeed a surreal place to be. 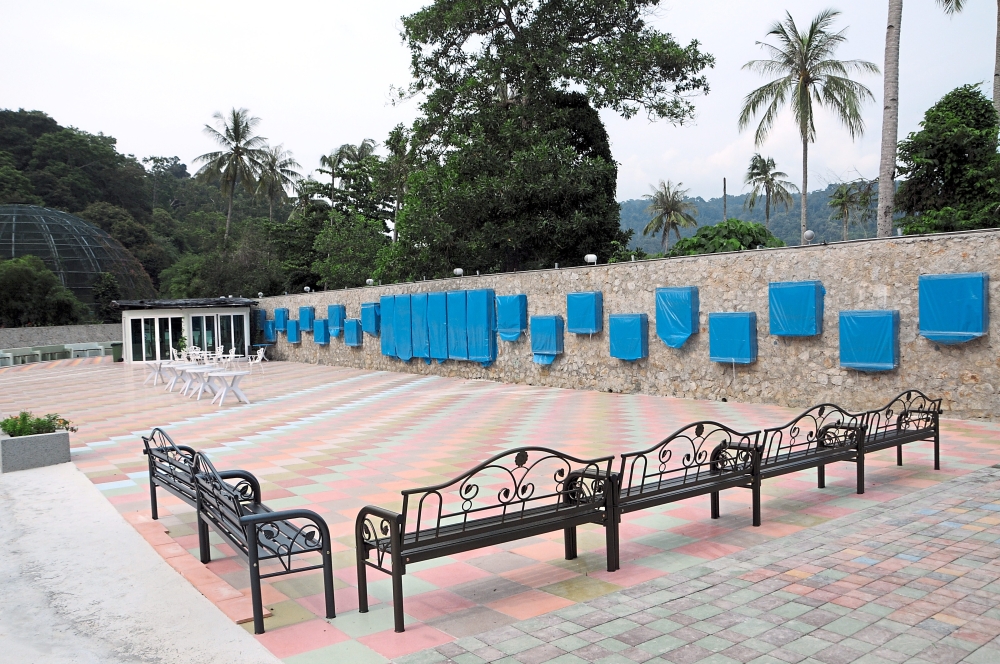 A boulevard wide enough for events to be held for a few hundred people at the Langkawi Garden of Rainbows and Butterflies.

“We are adding technology into it. As you walk in the park after sunset, special lighting systems, projectors and speakers will light up the garden and also the woodland on the fringe.

“There will even be motion detectors along pathways that trigger more special effects when people walk by,” Ng said.

Ng said he had a personal love for evening walks in the garden because on some evenings, the croaking of frogs would dominate and on others, a symphony of cicadas take over.

The garden is open to the public since early July for day visits and Ng said it would soon be open at night too.