A group of girls from La Petite Fox Maid and Butler Cafe in their uniforms.

Yugana dressed up as none other than Star Supa Comic mascot and fictional character Lady Shiori, which she described as an honour.

“It’s been my dream to play a mascot and bring it to life, especially a character I truly love.

“I was also involved with the idea and concept of Lady Shiori and Ryo, the other mascot for Star Supa Comic, and their back stories.

“I wanted them to be portrayed as heroes but with more values of humanity in them. They symbolise light in darkness and inspire people to not give up easily and learn from their weaknesses,” she said.

“I loved to be part of the event because Star Supa Comic has strong principles in line with what the local AGC community wants,” she added. 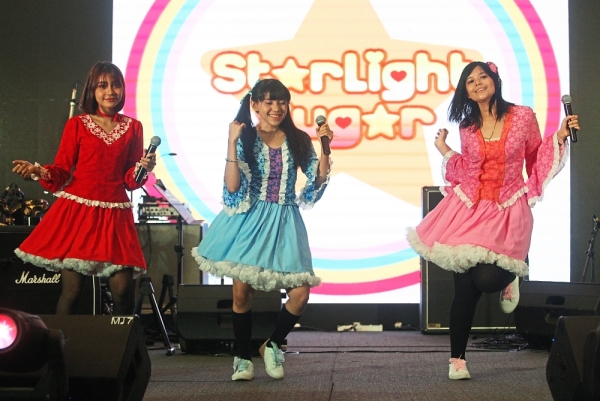 Starlight Sugar treated visitors to an electrifying performance as the opening act at Star Supa Comic.

The mascots were designed by Tan Yau Lim aka Kazeoyuurin from Claz’room College.

Leon Noel, who cosplayed as Ryo, expressed similar excitement about the event.“The costume took me two weeks to complete and the character relates well to my personality. Ryo is mischievous and likes cats, just like me,” he said.

Organiser i.Star Events Sdn Bhd director Jason Yap said putting together the second Star Supa Comic in less than eight months was a testament to the love and support of the AGC community.

“When we organised Star Supa Comic in December 2018, we were nervous about the reaction from AGC fans.

“Thankfully we garnered tremendous support from the community and they loved the show, which paved the way for our second one.

“We have also been recognised by the International Otaku Expo Association (IOEA) in Japan, a body that provides support and guidance to ACG events,” said Yap, adding that this year’s event attracted between 20,000 and 30,000 visitors. Excited fans near the stage area during a game session.

He added that the event provided another platform to the AGC community to mingle with like-minded fans.

“This is something they are passionate about and for some, they can be themselves here by cosplaying as their favourite characters. The community is definitely growing.”

AGC fans thronged the venue to check out the various booths which featured anime merchandise, cosplay props and e-sport competitions.

Some of the cosplayers dressed as their favourite anime, game and movie characters such as Spider-Man, Naruto, Overwatch game’s Genji and Hanzo, Sailormoon as well as Saber from the Fate Grand Order anime.

Guests Coscat Props from Taiwan, Ola Aphrodite from Indonesia, Yuegene Fay and Thames Malerose from Thailand were among some of the well-known cosplayers greeting fans at the event.

Visitor Faiqah Najihah Fuad, 23, waiting with her friends for an autograph from Yuegene, billed Star Supa Comic as a great event. “We have been fans of Yuegene for the past two years and we are finally getting to meet him,” she said.

At the Black Shark booth, visitors indulged in playing Mobile Legends and other games with the Xiaomi Black Shark 2 gaming phones.

“The specifications are similar to Black Shark 2, which aim to provide unparalleled gaming experiences to users,” he said.

“We sell a wide range of products from wigs and make-up imported from Japan, as well as merchandise and clothes as our target market is cosplayers,” he said.

In the Star Supa Comic Runway cosplay competition, Lim May Lee grabbed the champion’s spot as Caitlyn from League of Legends, while Lim Kien Leong took the first runner-up spot as Warrior of Light from Final Fantasy Dissidia, followed by Goh Liang Ming as Isaac Clarke from Dead Space 2.