Well prepared to handle the worst

A ‘victim’ is lifted up to a helicopter during the Disaster Management Exercise at Penang Hill. —Photos: CHAN BOON KAI/The Star

IMAGINE a landslide striking the Penang Hill funicular train as it brings 50 passengers up to the hilltop. Chaos would certainly ensue.

Wishing to be prepared for the worst, 15 agencies held a Disaster Management Exercise at Penang Hill.

They trained to evacuate train passengers to safety.

From the steep railway, the ‘victims’ were brought to the upper station using a four-wheel drive vehicle. An ‘injured train passenger’ receiving treatment from a member of the rescue team.

A helicopter was deployed to bring the injured passengers to Penang Hospital with the Polo Ground across the road used as an emergency landing pad.

“From Penang Hill to the Polo Ground, the flight took four minutes. ‘Passengers’ being guided to safety.

“We used a winching stretcher and Nato strop to hoist the victims up to the helicopter hovering above the ground.

“The day was cloudless and it made the rescue process easier,” he said, describing the successful simulation exercise.

Penang Fire and Rescue Department director Saadon Mokhtar said that through the simulation exercise, different agencies learned to coordinate their efforts and make better decisions to be ready for real-life situations. 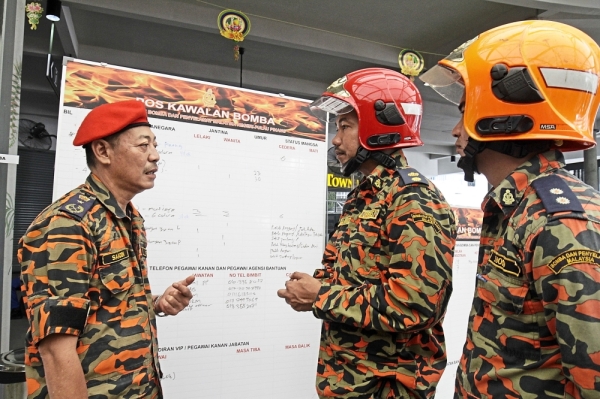 Saadon (left) briefing his men on the rescue mission.

Penang Hill Corporation (PHC) general manager Cheok Lay Leng said fire drills were also carried out twice a year when the funicular train is shut down for its scheduled maintenance.

“This is the first time a large- scale simulation is carried out here.

“We must learn from the major landslide that happened here in 2017 and be ready to face the problem. Two ‘victims’ being prepared to be evacuated during the simulation exercise.

“A post-mortem will be held to identity the mistakes during this exercise so we can improve our coordination further,” he told reporters.

More than 400 personnel from 15 agencies took part in the recent four-hour drill.