The event at the Sri Petaling Community Centre saw visitors indulging in a variety of food and performances.

Some even took the opportunity to take pictures and chat with Kok.

Children also got to enjoy ice cream and popcorn.

Also present were deaf and mute students of SMK Desa Perdana’s special education class, who performed a dance at the open house. 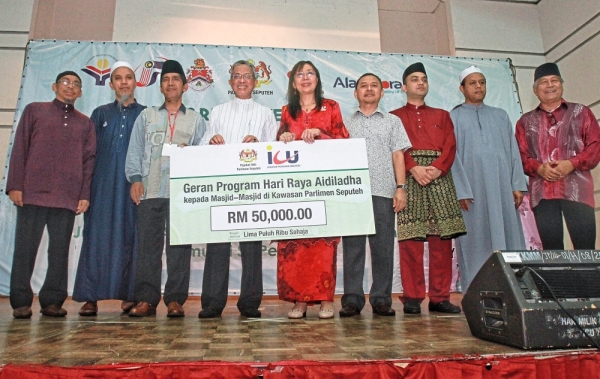 Kok (centre) with mosque representatives during the presentation of RM50,000 to five mosques in the Seputeh area.

Their teacher, Tan Lee Ha, said the event was a good opportunity for the children to join in the celebration and for them to mingle with others outside their comfort zone.

There was also a kompang performance by the boys from Masjid Al Muhsinin, Taman Desa.

“These residents look forward to such events as they stand a chance of getting some contributions that would go a long way towards lessening their financial burden,” she said.

During the event, visitors were given duit raya as well as goodie bags.

“Those who are present consist of diverse races and this is the spirit of goodwill that we need to nurture among our people,” said Kok.