The Ponce twins from argentina wowing the crowd.

THOUSANDS in Berapit Village, Bukit Mertajam on the mainland had a taste of the popular George Town Festival (GTF) 2019 through a colourful cultural show in their area.

The ‘Macam Macam Berapit’ event next to the Berapit market featured outstanding performances including an item called ‘Celebrating the World’ by twin brothers Emilio and Leandro Ponce from Argentina.

They presented a spellbinding combination of circus and dance moves along with live music.

Another notable item was by local group Culture Shot which presented folk songs accompanied by the sounds of the erhu, rebana, gong, gendang and Chinese cymbals. 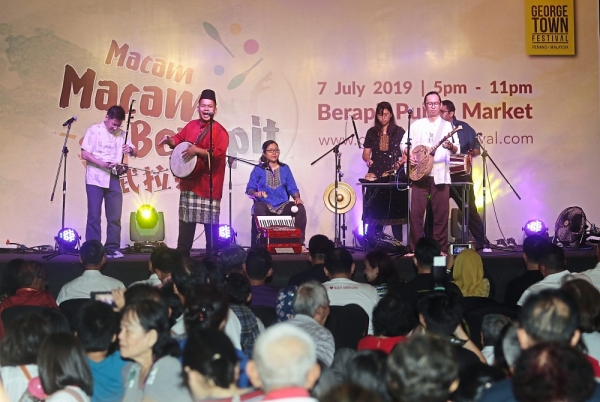 A lively cultural performance by Cultural Shot during the Macam Macam Berapit show in Bukit Mertajam.

There were also ballet performances and a Teochew puppet show at the event held on Sunday.

Bukit Mertajam MP Steven Sim Chee Keong said he was glad that the people of Berapit had the opportunity to enjoy a local-cum-foreign cultural show.

Sim, who is also Deputy Youth and Sports Minister, hoped that Macam Macam Berapit would be organised as an annual event from now on.

“For the past 10 years, GTF has been held in George Town on the island with a sister event called Butterworth Fringe Festival on the mainland in recent years.

“This year, we celebrate the 10th anniversary of GTF.

“I wish to thank the state government for extending it to Berapit,” he said.