Heading towards an ageing society by 2030 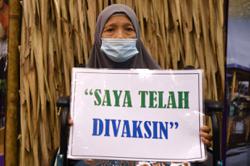 Fatimah giving out financial aid to an elderly man at an event. — Filepic

The total population of the state in 2018 was 2.79 million and this is projected to increase to 3.29 million in 2030, said Welfare, Community Wellbeing, Women, Family and Children Development Minister Datuk Seri Fatimah Abdullah at a gathering for People with Disability (OKU) and senior citizens here.

She said according to the Statistics Department report, the country was expected to become an ageing society by 2030, when its people aged 60 and above will make up 15% of the total population.

“In line with current and future needs, the National Senior Citizen Policy and National Senior Citizen Action Plan were passed in 2011. This has become a commitment for the government to help senior citizens to be independent, dignified and respected,” she added.Fatimah said the state govern­ment had helped them in many ways, like placing qualified senior citizens in old folks home where they were given medical treatment, counselling, physiotherapy and recreational activities.

Others included the setting up of a senior citizens service centre, talent identification and involving them in sports activities.

On financial assistance, she said the state Welfare Department has given out RM67.3mil to 56,096 recipients between January and April this year.