Meor Razak says the projects can affect the ecosystem.

TWO more areas in the Kenderong Forest Reserve in Gerik, measuring some 700ha in total, have been earmarked for forest plantation projects.

“The two projects were approved on April 16 and 18 this year, respectively.

“The projects were registered under two separate companies and involve different EIA consultants, but both proposed deforestation in the area to make way for rubber plantations,” he told StarMetro.

“We check the website often, as it shows the updated list of all approved EIA reports,” he said.

“This is an environmentally sensitive area.

“According to one of the reports, no large fauna was found in the area except for birds and insects and the site was filled with secondary type of plants and trees because of previous land clearing and road construction,” he said.

It was reported earlier that the Perak government had approved forest plantation projects involving some 400ha of land in Kledang Saiong Forest Reserve in Ipoh and Bukit Kinta Forest Reserve near Gopeng.

In March, Perak Mentri Besar Datuk Seri Ahmad Faizal Azumu said the land was not part of a forest reserve but in a secondary forest.

Meor Razak said one of the EIA reports for the latest projects stated that the project would consist of 12 months of logging and another 14 months to plant the rubber trees.

“Such projects will require wide roads for lorries to enter and leave the area.

“This may disturb animals’ roaming areas, especially the tigers. Tigers need at least a few hundred square kilometres to roam and hunt,” he said.

He thinks the project will most likely be using an entry point along the Gerik-Baling road.

“We also received a call from a stall owner in that area, who claimed that several individuals had asked him to move his stall to make way for the project,” he added.

Meor Razak said SAM and other environmental non-governmental organisations had been calling on Perak government to stop these forest plantation projects as it could affect the ecosystem.

“The projects will affect the flora and fauna of the forest.

“We have said many times that we are not against modernisation and development,” he said.

“What we are against is deforestation and encroachment into forest reserves that will destroy the ecosystem and eventually affect humans,” he added.

Comments from the Perak Mentri Besar’s office were unavailable at press time. 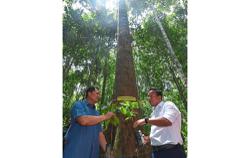