Saving them from the street

State Welfare officers talking to some of the vagrants during the operation to identify the homeless in Jalan Masjid Kapitan Keling.

TWENTY-FOUR vagrants were rounded up from the street in a special integrated operation in Jalan Masjid Kapitan Keling and the Komtar area in George Town.

Among those detained during the operation carried out on Friday night were five persons with drug-related cases while 19 others were referred to the state’s Welfare Services Department.

“Of the 19 persons handled by the department, five of them will be put under the government’s rented homes’ programme.

“Three of the vagrants were given warnings and told to return to their families while two more have been sent to the Penang Hospital to receive treatment. 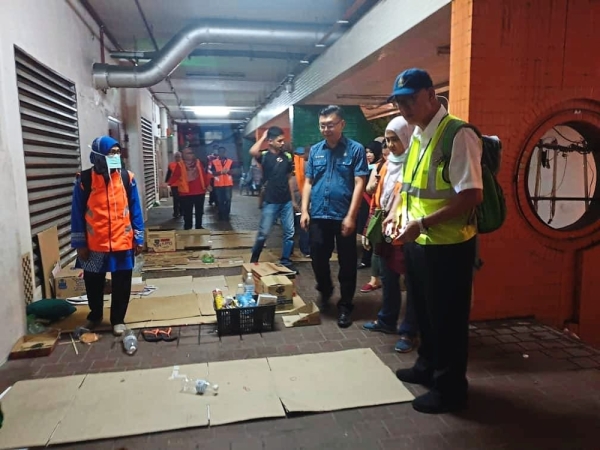 Phee (in reflective vest) and Komtar assemblyman Teh Lai Heng (in blue shirt) looking at the cardboard sheets used by the vagrants.

“There is another case involving a foreigner which we will refer to the United Nations High Commissioner for Refugees.

“Some of the beggars and homeless were given warnings as they actually have a place to stay and a job,” he said in a phone interview.

The operation was headed by the department and involved several other state agencies.

Meanwhile, Phee has urged NGOs, associations, food outlets and restaurants to work out a plan to distribute food for the homeless on specific days.

“Do not throw the leftovers everywhere. Let’s come out with a solution, so that the cleanliness and health of the people can be maintained,” he said.