Thy grows different types of plants despite staying in a condominium.

GREEN living requires personal commitment but having incentives certainly helps create greater interest among the public to embark on a sustainable lifestyle.

Petaling Jaya City Council (MBPJ) is said to be the first council not just in the country but also Asia to offer assessment tax rebates since 2011 to ratepayers who practise green living.

Homeowners will be given a one-time rebate if they implement environmentally-friendly practices in their house and adopt a low-carbon lifestyle.

After the closing date, MBPJ will send experts to houses which owners have applied for a rebate under the scheme, to evaluate their practices.

The city council will provide an assessment rebate of up to 100% or a maximum of RM500 – whichever is lower – that will be reflected in their 2020 bill.

StarMetro spoke to residents who received 100% or the RM500 maximum rebate for previous years’ assessment based on their eco initiatives.

Yew and Hoe have incorporated green features in their home such as solar panels and LED lights.

Mother of two, Thy Wuey Ping, lives in a condominium but despite that, strives to adopt a green lifestyle.

She qualified for the maximum RM500 rebate in her 2018 assessment bill.

“I changed all the bulbs in the house to LED lights. I kept the receipts as proof to show to MBPJ when they came to inspect my condo.

“As a family, we also strive to consume less water even though the first 20cu m is free in Selangor.

“This carries points too when it comes to qualifying for the assessment rebate.

“I separate my household waste and drop the recyclables at my condominium’s recycling bins,” said Thy who learns new eco living ideas through online support groups.

She has also taught herself to weave baskets using food packaging such as 3-in-1 drink sachets.

Thy hopes to teach senior citizens in old folk’s homes how to weave baskets using these materials in the future, as this will keep their minds active while giving them an opportunity to play a role in saving the environment. “My mother gives me all her cleaned food packages to be weaved into baskets.

“There are many videos online on ways to upcycle plastics,” said Thy who cultivates many plants in her house.

She has also learned to make eco-bricks using plastic bags which are cleaned then stuffed into 1.5l drink bottles.

The bottles can later be used to make furniture and construct walls. This helps to prolong the usefulness of plastic and ensure it is used more than once.

“I came to know of the Malaysia Eco Brickers community recently and I plan to donate my eco-bricks to those who need them,” she added.

In addition, Thy shops for clothes at second-hand stores and patronises Bring Your Own Bottle shops.

She has embarked on waste composting too, using the Bokashi fermentation technique.

Thy said those interested in practising a green lifestyle should start by separating their household waste and make more conscious decisions while shopping.

“Among the main challenges in going green are time constraints and having to put in extra effort. However it needs to be done for the sake of the environment.” Thy has started weaving baskets with 3-in-1 drink sachets.

Couple Chatwin Hoe and Maggie Yew incorporated energy-saving features when they renovated their double-storey house and received a 100% assessment tax rebate for their efforts.

“We installed a solar panel that is connected to our water heater and LED lights in places such as the living room and kitchen.

“We also installed water-saving flush boxes in the toilets.

“Our rooms have energy-saving air-conditioners too,” said Hoe.

He acknowledged that though energy-saving appliances cost more, they translate into savings in the long run.

“I do a lot of online shopping and buy and keep LED lights when they are on offer,” said Hoe who occasionally cycles to the Forest Research Institute Malaysia in Kepong with his wife. Cycling qualifies for points under the tax rebate programme. 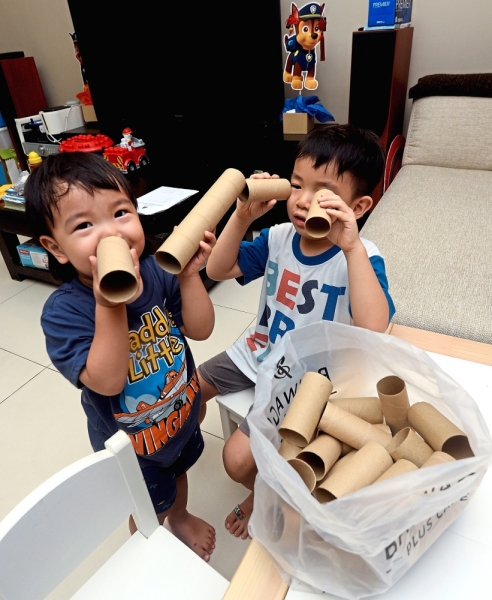 Yew is collecting used toilet paper rolls to turn into toys for her sons.

“Energy-saving appliances cost more. I hope manufacturers would be able to reduce the price.

“The government should support manufacturers that make these eco-friendly items by offering them a tax rebate too. Hopefully this will encourage more people to purchase such items,” said Yew.

She has also started collecting used toilet paper rolls to turn them into toys for her sons.

The couple plan to embark on hydroponic gardening and composting in the future.

On how to popularise green living, the couple said strict enforcement should be carried out, especially for waste separation at source.

“A notice was sent to households to separate waste and we are doing it. But many don’t.

“When there is no enforcement, people will not follow the rules,” said Yew.

Senior citizen Syed Mohd Taufik has created his own rainwater harvesting system, which earned him points for the assessment tax rebate.

He uses the collected water to water his plants and takes great pride in his invention.

Syed earned a 100% tax assessment rebate for the green initiatives he implemented in his home.

An avid birdwatcher, he noticed more birds of different species have been visiting his house and the neighbourhood due to the increase in the number of plants and trees.

He once rescued a tree that his neighbour had discarded. Syed has created his own rainwater harvesting system.

“He did not want the plant so I planted it in a corner of my garden and now it has grown to 10m and attracts various birds.

“I have spotted green pigeons, coppersmith barbet and black-naped orioles,” he noted.

In his garden, he collects mowed grass and discarded leaves to turn into fertiliser.

“I hope people will discard bad habits such as littering.

“Dispose your rubbish properly and be considerate to trash collectors.”

For details on the assessment rebate, visit www.mbpj.gov.my