‘Colon cancer can be prevented’

Participants at the StarLIVE talk on ‘Digestive Health and U’ at Menara Star, Petaling Jaya. — Photos: RAJA FAISAL HISHAN/ The Star

COLON cancer can be avoided when detected early as a polyp (tissue growth), participants at a StarLIVE talk on colon cancer by Ramsay Sime Darby learnt.

The talk was held on Saturday at Menara Star’s Cybertorium to a packed room.

“We want to try and pick it up before it becomes a cancer and prevent it from happening,” said speaker and consultant gastroenterologist Dr Chen Harn Chin from Subang Jaya Medical Centre (SJMC) during the talk entitled “Digestive Health and U”.

He said Malaysian cancer registry data between 2007 and 2011 showed colorectal cancer was the second most common after breast cancer, adding that the former was prevalent among men and the second most common cancer in women. The age distribution among patients is usually above 50 years.The majority of colon cancer starts as a benign polyp but can mutate and form a cancer over 10 to 15 years. 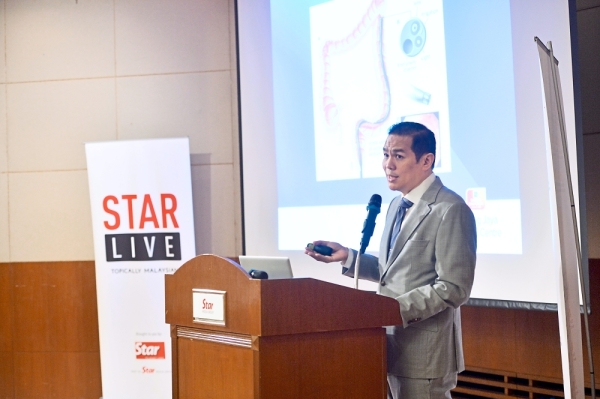 Dr Chen detailing the process of screening for colon cancer.

The most common symptom of colon cancer is a change in bowel habits, he said, like prolonged constipation or diarrhoea or both, or blood in the stools.

He said when symptoms appear, the cancer would have likely advanced to stage three or four.

Those whose family members or first-degree relatives with colon cancer are almost twice at risk of contracting the disease. Other risk factors include hereditary or genetic conditions, those with inflammatory bowel disease, and those with lifestyle risks involving smoking and excessive consumption of alcohol and red meat.

“Colon cancer screening saves lives,” Dr Chen stressed. “Among all the cancers, colon cancer is the most preventable.” Participants listening to the talk presented by Ramsay Sime Darby.

The most common test is an annual stool test for blood in stools using the faecal immunochemical test (FIT), which is about 70% accurate.

Patients unfit for a colonoscopy or who do not want to undergo such a test can have a CT colonography or capsule colonoscopy done. An endoscopy is also a common screening method that can remove the polyps as well.

One type of endoscopy is called flexible sigmoidoscopy, which only scans the left side of the colon and can be done without a bowel prep or involve sedation.

A colonoscopy is more thorough as it scans the whole colon and includes finding polyps and removing them immediately. The procedure is said to be comfortable as patients are sedated throughout the process.

Dr Chen said if a patient was diagnosed with colon cancer, a sample would be first taken for a biopsy. If confirmed, CT scans and MRIs are done to determine the depth of the cancer. The treatment depends on the stage of the cancer. Dr Cha talking about the surgeries available to treat colon cancer, and the pros and cons of each procedure.

Early-stage tumours in the colon can be removed using a scope if they have not permeated the muscle tissues. However, he stressed that only surgeries could remove advanced stage growths.Dr Cha said a reason to remove a tumour was for doctors to know how it behaved after the surgery and to gauge the patient’s survival rate.

“It also allows us to decide if additional treatments are needed, such as chemotherapy, to complement the surgery. For the patient, surgery removes intestinal blockage, pain or bleeding caused by the cancer,” he said.

“Minimally invasive laparoscopy is as effective as open surgery, except procedures are done through holes instead of cutting open the abdomen.

“The patient will have a better surgical experience and experience less pain. He can also recover faster and leave the hospital earlier,” he said, adding that patients could also have solid foods sooner, experience bowel motions earlier and return to their normal activities faster.

“While open surgery provides doctors hands-on contact and is a faster operation, the procedure is more traumatic and painful with slower healing and patients staying in bed longer.

“Studies have also shown that keyhole surgeries are as good as open surgeries.”

He added that robotic surgery could be performed remotely through 3D images that provide better insight, but the issue was its exorbitant cost.

A question-and-answer session was held after the talk, followed by free body composition assessments for the participants. A dietitian and nutritionist was also available to advise the guests based on their results.

Participant Mohamad Ariff, 65, described the talk as helpful. “Health should be a priority. We are all at a stage where we are all going after materialistic things in the world that we forget about our health,” he said.

Kong Mun Yee, 62, said the talk was insightful and suggested a future talk on nutrition. “Like what the doctors said in the talk, it is important to eat well and maintain our muscle mass.”