RAMADAN bazaar traders vying for Sepang Municipal Council’s (MPSepang) “Best Trader” title will know on June 21 if they have won.

The results will be announced and award presented at the council’s Hari Raya Aidilfitri event.

Samsudin Sulaiman, who operates a fried chicken stall at the bazaar in Dengkil Jaya, said it would be a tough fight.

Out of some 500 traders last year, only 15 made it to the list of exemplary traders.

One of last year’s winners, Fazli Remat, said there was no way of knowing when the council officers would be coming to conduct spot checks.

To score points, he makes sure to keep his stall countertop as well as trading area dry and spotlessly clean throughout trading hours.

The drinks seller will be contending with 60 other traders in Kota Warisan. 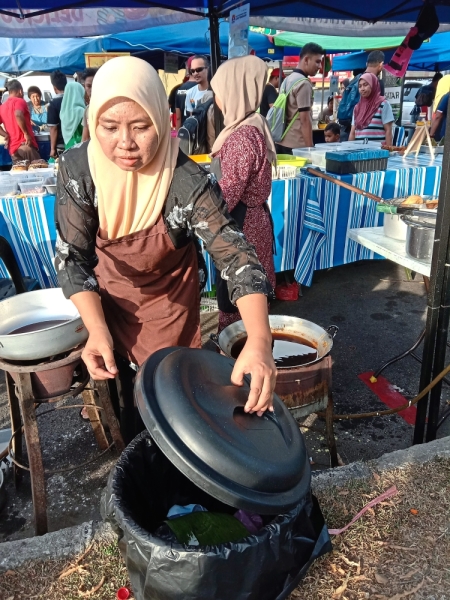 At the Dengkil Jaya Ramadan bazaar, lidded dustbins are a norm.

She said it definitely helped her stall garner a regular following.

Being able to choose the bazaar location and trading lot were the main motivating factors to win the contest, she confessed.

“We wanted to be in Cyberjaya and to have a bay at either the front end of the bazaar or middle section. Making it to the winners’ list enabled us to secure these choice spots.

“The stall location matters greatly as it means a 30% increase in daily earnings,” said Nurul Faizzah.

“Our objective is to educate and motivate traders to follow the council’s rules, especially on hygiene,” he said.

It is effective as a visit to the Kota Warisan and Dengkil Jaya Ramadan bazaars found the streets devoid of rubbish and indiscriminate littering.

There were no food scraps or spilt gravy on stall countertops.

Rubbish was neatly packed away in tied-up plastic bags. There were lidded dustbins behind most stalls.

The level of hygiene awareness has visibly improved.

One Dengkil Jaya trader who was grilling satar (a Kelantanese delicacy), said he doubted he would make it to the winners’ list because ash from his grill was flying all over the place.

A cendol seller at the same location was apologetic when an opened ice box revealed that a scoop was still lying inside.

She explained that this was frowned upon as the scoop handle, harbouring bacteria from the handler’s hands, would contaminate the ice.

Traders are also not allowed to wear accessories like rings, watches and bracelets as these can harbour bacteria.

Stall assistants must be registered during the licence application stage and their photographs clearly displayed on the licence. This is to ensure all food handlers have received typhoid vaccination.

“We are also using the contest as a vehicle to drive home the state government’s ‘no plastic’ and cashless payment campaigns,” said Arif.

MPSepang Licensing Department director Noor Halif Noorzan said the competition was a start for traders to upgrade their business environment.

He said the council would still conduct regular enforcement to ensure traders continue to obey rules and regulations.