RENTAL rates for facilities in Bukit Damansara Community Centre have been reduced by between 28% and 86% now that Kuala Lumpur City Hall (DBKL) has taken over the management.

Segambut MP Hannah Yeoh said the football field’s rate of RM70 is reduced to RM50 while the badminton court’s rental was down to RM8 per hour from RM24 previously.

She said the reduced rates, especially for the rental of the event hall, would greatly benefit young couples looking to host their wedding in a hall.

“Hall rental is expensive, so any savings from the reduced rental here can be used to pay for food and other expenses,” she added.

Yeoh said DBKL had outsourced the management of the community centre in 2015, which resulted in the increase of its rental from RM1,700 to RM3,500 for the whole complex.

“The contract, which would have ended on Dec 31, was terminated in March and the rental for the facilities is now managed by DBKL,” she said.

Yeohs aid DBKL is in the process of reviewing and stopping outsourced contracts that are not beneficial.

“I am grateful for the effort taken to return facilities built with taxpayers’ money, back to the public as it should be,” she said at a press conference after visiting the community centre in Bukit Damansara.

“There were two ping-pong tables in the past that were available for people to use, but now they are nowhere to be seen.

“It will be good to have the ping-pong tables again as table-tennis is a popular sport,” he said.

“There is a private gym operating in the community centre which has a strong membership.

“We have given them until July 31 to vacate. DBKL plans to open its own gym as a replacement,” said Mohd Nazam.

He added that booking of the facilities could be done online starting June 11 via http://appsys.dbkl.gov.my/kl-spef 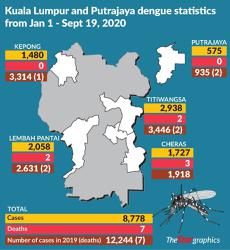