THANKS to the generosity of Malaysians, beggars are making their presence felt again at the popular Kapitan Keling Mosque in George Town, Penang.

A check by The Star showed that some of the beggars would time their arrival at the mosque when the place is most crowded to seek alms.

“The seasonal beggars are usually from out-of-town and would come over to Penang with family and friends.

“They do this once a year during Ramadan, especially every Friday, Saturday and Sunday. 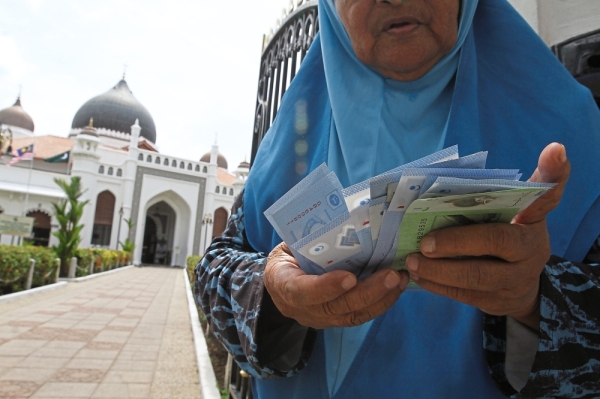 An eldery beggar showing the money she collected after spending some time waiting outside Kapitan Keling Mosque. 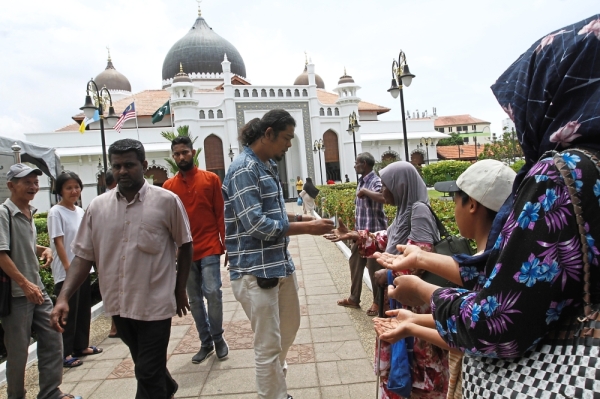 A mosque-goer giving cash to beggars after Friday prayers.

“If the Welfare Department personnel carry out their operation, these individuals would usually hide in their vehicles,” he said.

Mohamed Rizwan said the emergence of many charity groups that come with food and financial aid was another contributing factor to the rise in the number of beggars.

A mosque-goer, who declined to be named, said he would usually donate to the mosque after Friday prayers.

“I want to donate to the beggars but you can’t be sure if they are poor and needy.

“It’s better to donate through an organisation which will do a background check on its intended recipients before giving out the aid,” he said.

He said a good number of them could also be seen begging at the many Ramadan bazaars in the state, including the one in Queen Street near the Kapitan Keling Mosque.

George Town OCPD Asst Comm Che Zaimani Che Awang said it was not against the law for the public to give alms to the less fortunate.

“Enforcement is usually carried out by the state Welfare Department but the police will take part if we are invited for a joint operation,” he said.

“During Ramadan, it is a known fact that Muslims are encouraged to do charity and pay zakat fitrah or zakat fidhiah.

“In Penang, mosques are popular locations to find zakat recipients,” she said.

Chitarthany added that the department would continue to monitor and carry out operations at mosques during Ramadan.

“We have carried out operations at Kapitan Keling Mosque and nearby areas.

“For the northeast district, 56 operations were carried out from a total of 162 operations statewide.

“We have rescued 258 homeless and beggars from among locals and foreigners,” she said.