The entrance to the double-storey market complex in Jalan Sungai Satu in Batu Ferringhi, Penang.

THE RM9mil double-storey market complex in Batu Ferringhi, Penang, is set to open in July after several delays.

It will have 16 food and beverage stalls, 28 dry and wet market stalls, a multipurpose hall, three badminton courts, a surau and a recycling centre.

There are also 74 parking lots for cars, 44 for motorcycles and 29 for bicycles at the complex which has a built-up area of 2,972sq m in Jalan Sungai Satu. Zairil (grey shirt), Yew (third left) and other officials checking out the badminton courts at the complex.

He said an operator would be appointed to manage the complex via an open tender, adding that the Penang Island City Council (MBPP) would handle details of the Request For Proposal (RFP).

“There will be a site visit and the tendering process will close on June 3,” he said after visiting the complex recently.

The project which started in June 2014 was initially slated for completion in July 2015.

However, the contractor was granted three extensions for clearing works after rocks were found underneath the project site. The spacious complex has 16 food and beverage stalls.

In July 2017, Finance Minister Lim Guan Eng, who was then Chief Minister, was upset with the project after spotting several defects at the complex during a site visit.

Irked by the shortcomings and calling it unacceptable, he asked his officers to collect copies of his text speech given earlier to reporters.

MBPP mayor Datuk Yew Tung Seang, who was also present, hoped the public would maximise the facilities at the complex and see it as a community centre.

“There are many facilities here, and we wish to see them utilised throughout the day.

“The operator will be responsible for managing all the facilities and ensuring the place is safe and lively,” said Yew. 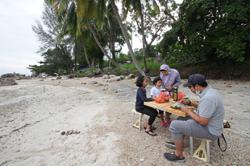