TAMAN Palm Grove residents in Klang want the developer of a stalled mega project to clean up the abandoned site that is filled with weeds, creepers and fallen metal hoardings.

The six-hectare site was where the Gateway Klang (formerly known as One Gateway Klang) mixed development project was supposed to be built.

Instead, the area is now filled with debris and rusted steel rods protruding from concrete piles. The site has been abandoned for more than six years. 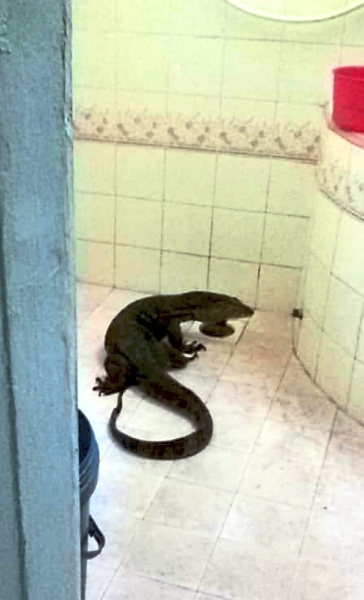 Residents have found monitor lizards in their homes.

Pandamaran assemblyman Tony Leong Tuck Chee said he had received complaints about the unkempt area of the abandoned project.

“Under the Street, Drainage and Building Act 1974, the landowner or in this case the developer must keep the land of the stalled project clean and not allow it to become a nuisance to the surrounding neighbourhood.

“I will inform Klang Municipal Council (MPK) to act on this immediately,” said Leong. Suleka pointing out the abandoned project site overgrown with wild vegetation across from her house.

“MPK must issue an immediate notice to the developer to rectify the situation. Firemen have been called to Taman Palm Grove many times to remove snakes that slithered into houses from the stalled project site.

“Our neighbours are stressed out because huge monitor lizards and pythons have appeared in this residential area.

“It has turned into a breeding ground for reptiles,” he said.

Suleka Madhvan, 69, whose house faces the project site, said her neighbours spotted green iguanas in the drains and even a Malayan weasel in people’s backyards. Lakshmi Samy Nair, 69, said the dilapidated metal hoardings around the project site had attracted scrap metal thieves who had been ripping out loose hoardings.

“Creepers are growing over the hoardings, and we want the developer to clean up the place,” she said.