IN RETURN for paying RM80 in participation fees and landing a Sagor sea catfish that weighed in at slightly over a kilogramme, lorry driver Mat Yasin Arbaaim was richer by RM70,000.

Having caught his prize catch at first cast with a Shimano rod and reel, a 13.6kg line and sea worms as bait, Mat Yasin attributed his win entirely to luck.

Mat Yasin was competing at the Tourism Malaysia Surfcasting Tour fishing competition in Pantai Remis, Jeram, Selangor, which drew 1,578 participants from as far as Singapore, Thailand and Indonesia.

Describing conditions within the four-hour time frame given to participants, organiser Wakjali Event Management manager Md Zali Kasran said the competition had taken place in a cloudy and windy atmosphere. It was low tide and the surf had receded some 300m from shore.

At the event, the Sagor sea catfish was the catch of the day, as some 50 entries submitted for weighing were from that species.

The only other variant was the sona sea catfish, which was landed by two other participants.

Regular anglers who fish here said this was also a good spot for the whitelipped eel catfish, sand croaker and stingray, provided that the season and water conditions are right. 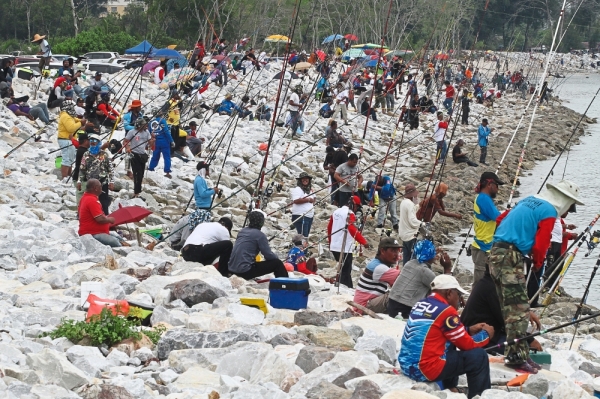 Tourism Malaysia Domestic and Events Division senior deputy director Mohd Nasir Kushairi said the fishing competition which will travel to Dungun, Terengganu, in June, was held in Melaka and Kelantan before coming to Pantai Remis.

”It is a good way to encourage domestic tourism and generate income for the local community. I was told that some 1,000 rooms were booked at holiday chalets here for this event,” said Mohd Nasir.

He said though beach activities at Pantai Remis were limited as

the water quality discourages swimming, there are other plus points such as its beautiful sunset, picnic spots and nearby seafood offerings.

“Pantai Remis may not be Bondi Beach but we must start somewhere. The more people come here, the more awareness we can raise for this beach. When it becomes a tourism site, better facilities will follow,” said Mohd Nasir.

He said promotion efforts for Pantai Remis in Selangor began as early as 10 years ago.

It complements the state’s other tourism products like Sky Mirror and Kampung Kuantan Fireflies Park.

Jeram assemblyman Mohd Shaid Rosli, who presented the prizes, said he hoped that a theme park and four star hotel would be built here soon.

“We have investors who are ready to pump in RM100mil into these projects.

“The next step is for Kuala Selangor District Council and the state government to give approval for the land.

We are waiting for the outcome,” said Mohd Shaid.