“It feels like a dream. It did not sink in until some time after I got the call from the Institute of Landscape Architects Malaysia (Ilam) about the award,” said the Malik Lip & Associates co-founder and director.

Nik Malik is still active in landscape architecture and lectures at several universities.

Many in the field cite him as a mentor, having trained under Nik Malik early in their career.

“Lecturing, practising and giving advice is part of my responsibility,” said the 70-year-old.

“As a pioneer in the field, it was very challenging to break the barrier back then and even now. 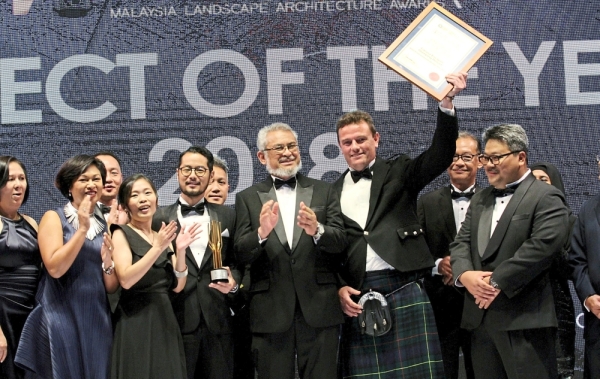 WHZ Environmental Design Sdn Bhd director Antony Hastings (in kilt) and his team celebrating after receiving the Project of the Year 2018 Award at MLAA from Khalid (centre).

“Every step we take is to convince people that landscape architecture is not just planting trees and shrubs, that we are not glorified gardeners.

“Over the years, things have changed. Now people are more convinced that landscape architects have a lot more to do, although the responsibilities are evolving.”

Besides designing landscapes and spaces to strike a balance between the built and natural environment, Nik Malik said landscape architects are also champions of the environment.

“Many claim to use ‘sustainable’ practices but they do not understand what it actually means. The rainforest represents sustainability; you do not have to take care of it, it can take care of itself.

“I still practise and teach because I believe in training and bringing forth the next generation of landscape architects. 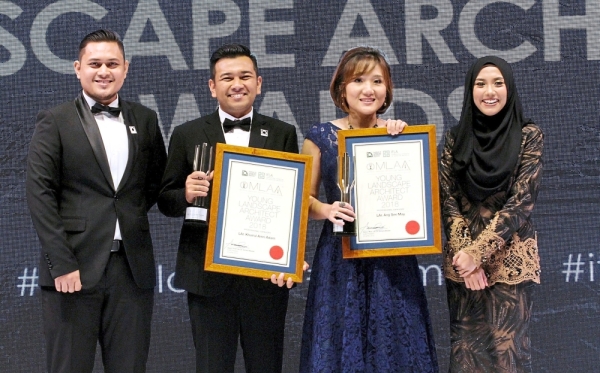 “It is important to share with the next generation because they will have to take care of the industry and environment, and ensure everything is sustainable.”

Some of Nik Malik’s notable projects include KL International Airport in Sepang, Prime Minister’s Office and Wetlands Park in Putrajaya, The Datai Resort in Langkawi, Albukhary International University in Kedah, Raja Tun Uda Library in Selangor and The Verve Suites in Kuala Lumpur.

MLAA, which marked its 11th edition this year, aims to inspire the creation and implementation of new design trends and lead the direction of landscape development in Malaysia and beyond.

StarMetro was presented one of the Media Awards for the story entitled “Shaping New Trends to Keep with Times”.

A total of 62 awards were presented across nine categories. MLAA received 141 submissions. 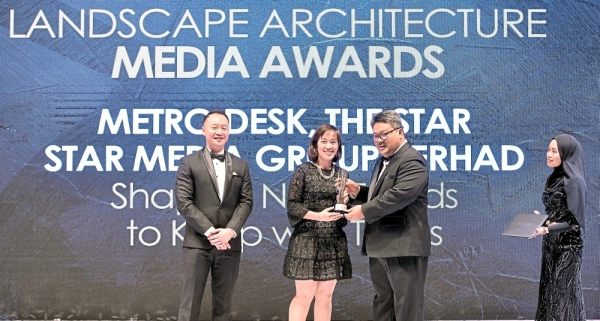 MLAA, which was created when Malaysia was selected to host the International Federation of Landscape Architects (Ifla) World Congress 2007, serves as a means for local professionals to benchmark themselves against the global community.

MLAA is one of Ilam’s many programmes leading up to the Ifla World Landscape Architects Summit 2020 to be held in George Town, Penang, in August next year.

“These include using new infrastructure to create landscape spaces that have an economic, environmental and social value that cater to local communities as more infill development takes place, as well as looking at old or abandoned infrastructure as valuable assets that can be reused, re-appropriated and transformed to provide spaces for people.”

Be it climate change, urbanisation, population growth or densification, Khalid said landscape architects have ideas to make future cities liveable, workable and beautiful.“We might all be familiar with older forms of ‘grey infrastructure’ such as roads, railways and power grids.

“But landscape architects are challenging traditional ways of dealing with water, waste, energy and transport, which are the circulatory systems of the city.

“For instance, instead of channelling rainwater runoff into a sewer system, they look into capturing and reusing rainwater for green roofs.

“A city that has a network of interlinked open spaces that are pleasant to walk in encourages ‘active transport’ and reduces the need for car and public transport infrastructure,” said Khalid.

Ilam president Assoc Prof Dr Suhardi Maulan said the jury for MLAA included planners and architects to ensure the projects were accepted by professions related to the built environment.

“The jury looked into the way landscape architects could showcase their abilities and deal with the landscape or allocated space in order to come up with a very interesting and good concept that could become an iconic project for Malaysia,” he said.

“Tiarasa Escapes stood out for several reasons; the way the landscape architects designed the resort by respecting nature, how they turned integration of nature in the built environment into something that people could relate to, and how the resort offered a lot of economic and tourism potential in a very sustainable way.”

Suhardi said the jury would showcase what Malaysia had to offer on a global stage for next year’s MLAA.