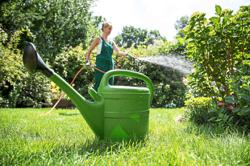 Young adults from the Puchong Beautiful Gate Centre are clearly very proud of their chilli garden.

SOCIAL horticulture has the ability to bring communities together and is therapeutic to some, as it brings people close to nature.

With local councils stepping in to give residents a helping hand, a group of residents in Bandar Utama and an intellectually-disabled team have shown that tending to plants has been fruitful in creating exemplary community gardens in the Klang Valley.

StarMetro spoke to the Kebun Kita Club from Bandar Utama 12 in Petaling Jaya and Puchong Beautiful Gate Centre in Puchong to learn more of their garden projects. The Bandar Utama 12 Residents Association won RM10,000 under the Petaling Jaya Sustainability Award 2017 and RM5,000 grant from the Selangor government for their community garden initiative.

A group of seniors citizens in Bandar Utama have successfully converted an abandoned land into an award-winning community garden without having to fork out a sen.

What was once an acre of bush-filled land, infested with mosquitoes and pests in the Bandar Utama 12 neighbourhood is now a garden lush with organic flowers, vegetables and fruiting plants.

Three years ago, resident S. Nadarajah, 83, and two other residents started the effort by planting fruit trees at the land.

After getting the necessary approvals from local authorities, the Bandar Utama 12 Residents Association converted the land into a garden and subsequently formed Kebun Kita Club two years ago. Kebun Kita Club chairman Pua Hua Keong said the beauty behind the project was its ability to unite residents of the 21-year-old neighbourhood, and instil the spirit of camaraderie among them.

“The vacant land was a dumping ground for construction waste. It was overgrown and infested with pests.

“In the past, no one wanted to walk past the area.

“Now it has become a place for the community to bond,” he said, adding that children and adults alike could be seen taking a stroll or helping to do a spot of gardening.

“The garden gives the children the opportunity to learn about nature and plants.” Intellectually disabled youths busy tending to chillies at their garden in Puchong.

Pua, who was also overwhelmed by residents’ positive attitude towards the project, said many donated unwanted items such as pavement tiles and water tanks.

“One resident donated three 200l water tanks from her factory. Many gave us topsoil, stones and seedlings for the garden.

“We did not have to fork out any money when we started the project as everything was donated by residents, including manpower.

“Petaling Jaya City Council (MBPJ) cleared the abandoned land and we continued with the rest of the work,” said Pua.

The community won RM10,000 under the Petaling Jaya Sustaina-bility Award 2017 and even got a RM5,000 grant from the Selangor government under its green environmental projects. This helped boost the project further. 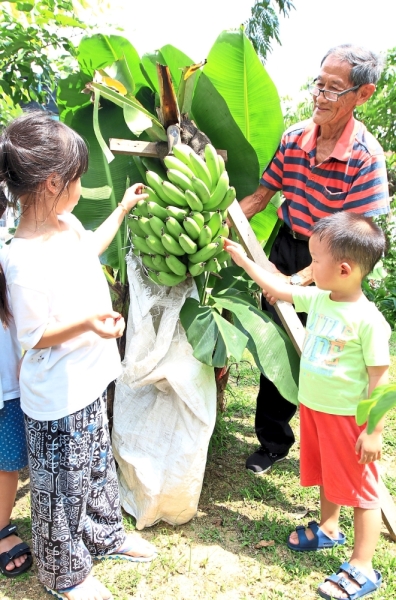 Chew (second from right) sourced for banana plants in Segamat, Johor, to plant in the Kebun Kita community garden in Bandar Utama.

Before this, residents would carry buckets of water to water the plants.

Hundreds of flowers and decorative plants such as violets, coleus and alternanthera are planted here.

The fruit trees consists of papaya, jackfruit, pineapples and bananas. The coleus plant is one of the many plants at the community garden.As of January, the garden has been getting direct water supply from Pengurusan Air Selangor Sdn Bhd.

An active club member Chew Cheong Huat, 82, made a trip to Segamat, Johor, to get the “best” banana variety for the garden.

He has planted over 20 banana trees, including pisang tanduk and pisang lThe coleus plant is one of the many plants at the community garden.As of January, the garden has been getting direct water supply from Pengurusan Air Selangor Sdn Bhd.

The club also sells vegetables to its neighbours and the funds collected are channelled towards the garden’s maintenance.Over 100 residents have each adopted a tree from the garden and donate RM20 a year for its upkeep.

“We work as a team and regard everyone’s feedback as important. “We have got to know more neighbours through this project and children are more aware of nature from our garden,” said Pua, who thanked former Bukit Lanjan assemblyman Elizabeth Wong, current Bandar Utama assemblyman Jamaliah Jamaluddin and MBPJ for their support towards the project.

There is another success story in Puchong where a group of intellectually disabled adults are growing a variety of chillies.

The Puchong Beautiful Gate Centre’s chilli project has 10 students involved in it.

Centre founder Sia Siew Chin said the students looked forward to harvesting the chillies each time they were ripe for picking.

“We received approval from Subang Jaya Municipal Council (MPSJ) to use a plot of land under the high tension cables for gardening purposes.

“Our advisory panel decided on planting chillies because they are easy to grow and care for,” said Sia, adding that the first seedlings were planted in December last year.

Now the plants are bearing a good amount of chilli, which are sold to the public.

Sia said intellectually disabled students were not patient but gardening helped them calm down.

The project also provides them with gardening and social skills.

“After harvesting the chillies, they get to take some for their families. Sia says students looked forward to harvesting chillies each time they were ripe for picking.

“It means the world to these students because they rarely get the chance to showcase their talent,” said Sia.

Among the students involved are Lim Ming Wei, 43, who looks forward to getting his hands dirty in the garden.

Compared to the rest, Lim speaks fluent English and enjoys gardening as it also helps him improve his command of Bahasa Malaysia by conversing with his best friend Ng Soh Chin, 29.

Lim, who works in Tesco, heads to the garden occasionally with help from his elderly parents who are his greatest supporters, said Sia.“It gets hot at the garden sometimes but I look forward to going there. Children from the Bandar Utama 12 neighbourhood have the opportunity to learn about plants since the Kebun Kita community garden came in existence.

“I get to practise speaking Bahasa Malaysia with Soh Chin,” said Lim, who was filled with pride when sharing his gardening experience.

The proceeds gathered from the sale of the chillies are channelled to the centre for the numerous activities organised for its students.

The garden has about 400 chilli plants and each is able to produce about 1kg of chilli in its lifespan of a few months, said Sia.

A plant with existing chilli sells for RM45.