Hassle-free recipes the secret of their success

(From left) Zubaidah, Suwarsi and Zalina at the launch of their latest cookbooks at the Kuala Lumpur International Book Fair in Putra World Trade Centre.

At the launch, the chefs hosted a live cooking demonstration at the main stage of the Putra Concourse in Putra World Trade Centre, Kuala Lumpur, while also sharing cooking and baking tips with fans and readers.

The attendees were also able to take part in a tasting session, followed by a meet-and-greet and an autograph session with the chefs at the Popular booth.

“I wanted to create easy cake recipes that people can start a business with, especially pastry and marble cakes. These are simple cakes with economical ingredients that are commonly found,” she said, adding that she has received numerous orders for such cakes.

Zubaidah, who specialises in various cuisines, has published several cookbooks on pastry-making and contributed recipes to local publications. 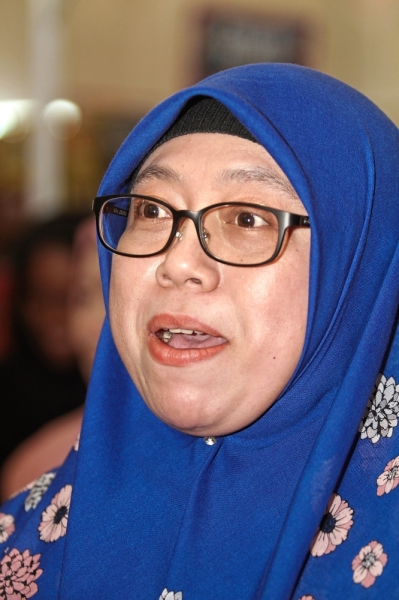 Azrina says the three women will embark on a tour of selected Popular bookstores nationwide throughout the year.

Meanwhile, the cookbook by former journalist Zalina consists of foolproof recipes that are quick and easy, her favourite being the Kari Ikan Mat Sabu – based on Defence Minister Mohamad Sabu’s handwritten recipe for fish curry, which she got from someone close to him.

“In the past, I did not know how to cook and that inspired me to create recipes and shortcuts that were fail-safe.”

In 2006, Zalina opened a cafe called Bzee Cafe & Bakery in Seremban. Since then, she has been conducting baking classes and her signature recipe is durian crepe.

For Suwarsi, the message she wants to convey is that everyone can cook anywhere.

The recipes in her cookbook make use of common household electrical products, such as rice cookers.

“Everyone can cook anywhere, whether they are at home or on holiday, with or without a stove,” she said.

Of the recipes in her cookbook, Suwarsi recommends a fusion pasta called Pasta Berkuah Kari, and those who prefer a healthier option can substitute the coconut milk with low-fat milk.

Fondly known as Chef Sue, Suwarsi has a career spanning two decades in the culinary industry and continues to contribute recipes to various media. So far, she has produced 10 cookbooks.

Retailing at RM29.90 each, the books are published by Seashore Publishing (M) Sdn Bhd and distributed exclusively by Popular.

Popular Bookstore’s Malay Department assistant merchandising manager Azrina Azmi said the books would be part of its in-store Ramadan@Popular promotion with a 10% discount on each copy.

She added that the bookstore was expecting to sell 30,000 copies of the cookbooks within a year.

The three chefs will be visiting selected Popular bookstores nationwide throughout the year.

They will also be making a stop at the BookFest@Malaysia 2019, which will be held from June 1 to 9.

“The chefs will conduct cooking demonstrations and book signing sessions during the tour to encourage interaction between them and the public,” Azrina said.